Cheever (Tim Robbins) has completed his last tour, looking forward to returning home to his wife and son in St. Louis. T.K. (Michael Pena) is on a 30-day leave, trying to get to Las Vegas to ease the severity of a unique war wound. Also on leave is Colee (Rachel McAdams), a naive solider hoping to return a special guitar to the family of her lover, killed during combat. When flight delays halt their travel plans, the trio decides to split a rental car and drive across America, bonding through conversation and road-weary hijinks. Faced with constant setbacks, the soldiers learn to rely on each other to make it through dark times, with the threat of redeployment on the horizon.

With the current glut of Iraq War films in the marketplace over the last few years, Burger’s decision to make yet another statement on the soul of the disenfranchised soldier strikes me as both curious and redundant. “The Lucky Ones,” a title of pure irony, doesn’t break any new ground dramatically, staying close to familiar routines of shattered lives and torrents of self-questioning. Presented in the guise of a road trip comedy, “Lucky” is anything but funny. Burger doesn’t possess the motivated touch to massage the right levels of insight and catharsis out of his screenplay (written with Dirk Wittenborn), ending up with a picture that stumbles around like a drunk, trying to resemble a good time, only to occasionally vomit up agonizing moments of political sermonizing and atrociously staged melodrama.

To keep the film captivating, Burger has dreamed up certain afflictions his characters have to overcome for expected third-act triumph. The choices are strange: Cheever comes home to find his wants a divorce and his kid needs $20,000 for Stanford tuition; Colee is lugging around a guitar of considerable value to bring to strangers she hopes will take her in as family, all the while nursing a wounded leg and an exasperating case of verbal diarrhea; and T.K. is a know-it-all planner who is nonetheless deeply afraid to disclose his genital mutilation to his girlfriend, preferring to work out erectile difficulties with the escorts of Sin City.

These comical/horrific motivations are handled with justifiable bewilderment by the cast, but the payoff on a few of these burdens is just ludicrous: T.K. revives his penis power while cowering in a rural drain pipe during a tornado, and Colee starts a bar fight when some sorority sisters make fun of her limp in a distinct “Facts of Life” approach, forcing the injured sprite to summon her inner Jo Polniaczek. It’s difficult to tell if Burger is whooping it up here or simply has no gift for screenwriting. I lean toward the latter.

It goes without saying that if the Iraq War is plugged into the writing, some opinions are going to be flung. “Lucky” manages to stave off the requisite outpouring of liberal squealing for a good part of the running time, but it soon seeps out. Unfortunately, it comes across as simpleminded preaching rather than an exchange of ideas to challenge the leads and their wartime experiences. “Lucky” is a lousy ethics class, inflamed to a point of torture when positioned between bits of boner comedy.

“Lucky” has immense difficulty moving past its low-budget limitations (the camerawork is dreadful), adding to an already excruciating viewing experience. As if there weren’t enough Iraq War movies of dubious quality and purpose already, “The Lucky Ones” is simply more kindling for the fire. 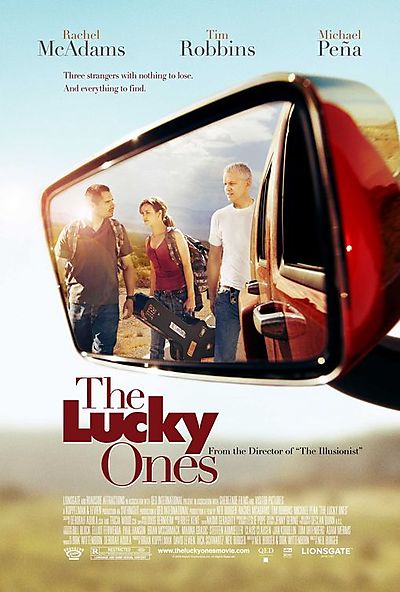