At 17 years of age, Georgiana (Keira Knightley) is bursting with excitement to marry Duke William Cavendish (Ralph Fiennes), only to realize the union has been forged with eternal emotional ice. Secluded and made to feel worthless due to her inability to produce a male heir for the Duke, Georgiana turns to social gatherings and political causes to fill her days, soon falling for Charles Grey (Dominic Cooper), an old friend who holds plans to become the Prime Minister. As William takes Georgiana’s friend Bess (Hayley Atwell) to become his mistress, the Duchess has designs on her own affair with Charles, finding William’s martial grip tighter and more destructive than she could’ve ever imagined when word leaks out to the public.

“The Duchess” is defined by its scripted urgency, with the writers (working from Amanda Foreman’s biography) eschewing a formal sense of manner and distance from Georgiana’s life to survey the turmoil. The feature dives right into the psychological toil the Duchess encountered as she embarked on a life-long experience that rarely stopped to ask her opinion. The picture is structured with primary attention to blunt emotional trauma, not the nuances of the problematical royal life, and the stripped down focus is appreciated to cleave away the wondrous ornate costuming and social square dancing, reaching for the delicate moments of frightening isolation and bitter frustration.

Director Saul Dibb approaches his film like a traditional museum piece, with porno-style attention to the fine edges of the elegant production design (often candlelit, of course) and expansive estate locations. Dibb, in perfect union with composer Rachael Portman’s poignant score, conjures an immediate time and place for Georgiana’s story. I certainly wouldn’t blame anyone for tuning out the plot to bathe in the juices of the recreated era; it’s a classical directorial effort that transports the viewer far and away with spotless execution.

Dibb shows grace with his talent as well, permitting a wide space for Knightley and Fiennes to carry out their battle of wills. Fiennes portrays the crisp venom of William with anticipated spirit, crafting something intensely judgmental and horrifying out of the often wordless role. Knightley, being the star of the show, really takes the cake in terms of imparting a superb sense of anguish. Essentially a reacting machine, Knightley gives the camera her all, running through the gauntlet of emotions as Georgiana’s life circles tragedy at an alarming pace. It’s a true leading-lady performance, and it shows amazing versatility on Knightley’s part that she can play her umpteenth tea-n-scandal role and have it feel fresh again.

When Georgiana starts to test out her individuality in the final act, “The Duchess” attempts a mood of sensuality that’s perhaps too Skinemax for comfort, losing the direction of the film for a few sequences meant to appease the bodice-ripper enthusiasts. It’s doesn’t spoil the picture, the subplot just confuses it for a moment before returning to a place of crushing royal bereavement that’s utterly compelling. 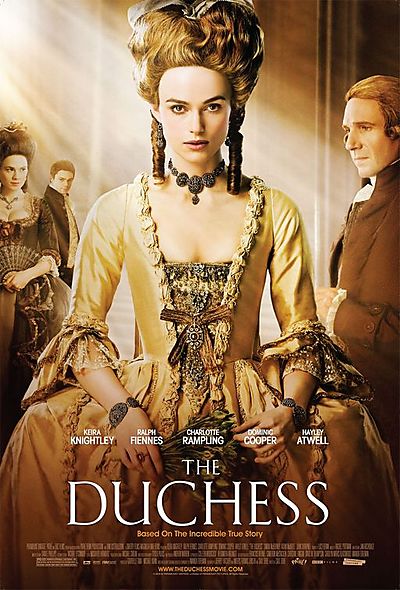