One of the first sounds introduced in the comedy “Surfer, Dude” is a bongo. I couldn’t dream of a more ideal way to start off a Matthew McConaughey vanity film than with a light bongo beat, guaranteeing the picture holds 100% McConaugheyness and that, at some point, the actor was nude during the scoring session. I wish the finished product was as amusing as the behind-the-scenes pot-fueled merriment I imagine took place during production.

A top surfer, Steve Addington (Matthew McConaughey) lives by his own whims, surviving on a steady stream of marijuana, endorsement checks, and perfect Malibu waves. When a ruthless surf mogul (Jeffrey Nordling) purchases Steve’s contract, he demands the laid-back surf star to join a reality show and sign away his likeness and surfboard moves for a virtual reality video game. Steve, not used to being bullied, declines, retreating to his comfort zone on the beach with pals and his manager (Woody Harrelson). When the professional heat is turned up and the money stops coming in, Steve loses his balance with nature, hoping a fast from his vices will help him discover the right path and bring back the waves that have stopped flowing for the summer.

“Surfer, Dude” lives up its title. This is a relaxed comedy, steeped in meaty trails of smoke, ideal blue waves, and “bummer, bra” themes of selling out to the man. Originating from McConaughey’s production company, the picture is a love letter to its star, parading the actor around shirtless, turning him into a heroic surf legend, and making the character a sex magnet.

It’s a sluggish performance from McConaughey here, who revels in the baked luster of Steve (Willie Nelson cameos as his drug dealer), stumbling around the film falling into misadventures with producers, groupies, and his brotherhood of surfers. With lengthy frizzy blonde hair, a gym-rat body tanned to the perfect shade of Southern Californian brown, and sporting a genuine grin when waves approach, it’s hard to argue the actor’s appearance. The entertainment value of the performance is what’s in question here; it’s an acting effort that spends too much screentime in a distanced, wildly unfunny coma, making it impossible to emotionally connect to Steve and his dreams of the unmolested surfer lifestyle.

It’s something of a shock to read that four writers are credited to the screenplay, which has all the dramatic depth of a McDonald’s training video. Nordling is obnoxious and infuriatingly one-dimensional in the villain role, perhaps trying to lampoon the agents in his own experience, but trying way too hard to land the smarm. The plot itself also misfires as a satire of media ubiquity, with cameras capturing Steve’s every move for a shady “Surf TV” reality show in the vein of “Big Brother,” but the jabs are toothless, and worse, outdated. The virtual reality game angle (complete with “Johnny Mnemonic” goggles) is another unwise concept that turns matters into a cartoon instead of something tangible to believe in.

“Surfer, Dude” doesn’t click as a satire or a broadly painted comedy, hoping to make sun-baked principles something to embrace, but it renders the film a listless muddle. Reaching for a drowsy consistency, McConaughey becomes lost inside his own motion picture, and while I can appreciate the party atmosphere, luscious waves, and aim to live life on the simplest of terms, the picture needed a stronger script and a more vibrant edge to find its true inner dude. 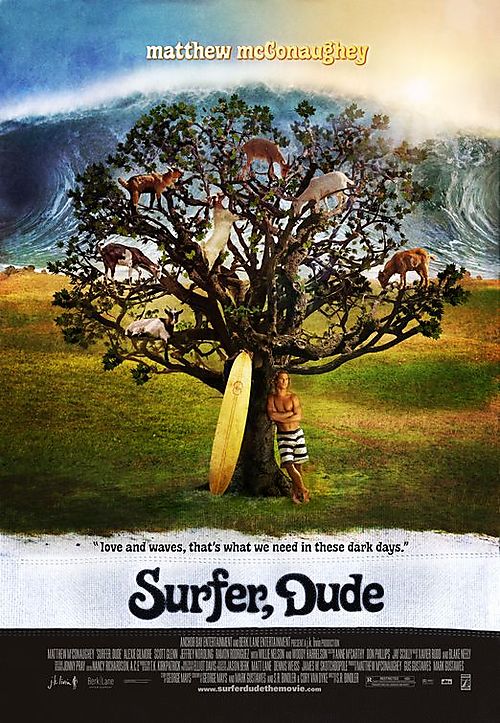