I always enjoy a filmmaker looking to air out his big screen love now and again. It keeps the filmography interesting, while revealing a passion perhaps unnoticed in previous directorial attempts. “Sukiyaki Western Django” is controversial filmmaker Takashi Miike’s valentine to the 1966 spaghetti western “Django,” not to mention the scads of copycats that followed. It’s a ferocious, pleasingly absurd orchestration of violence and warped tough guy posturing, offering Miike a reprieve from his traditional dreary imports. It’s a big, giant cluster of gunfights, mythmaking, and method acting, but it’s a distinctive distraction.

In a remote gold mining settlement, a line has been drawn between two terrifying gangs: the red-costumed Heike and the white-clad Genji. Into the town rides a stranger in black, known as The Gunman (Hideaki Ito), who has come to offer his services to the highest bidder. Sending the gangs into a fury, The Gunman quickly becomes invested in the plight of a widowed saloon girl (Yoshino Kimura), her traumatized son, and a grandmother (Kaori Momoi) who hides a secret past. With Heike leader Kiyomori (Koichi Sato) in a rage and Genji kingpin Yoshitsune (Yusuke Iseya) nursing a calm curiosity with this new resident, the stage is set for an explosion of violence, as the three sides declare war on each other.

Perhaps some of the inspiration for “Sukiyaki” was supplied by Quentin Tarantino, who’s known for this sort of idolatry, and even cameos here as the quickdraw outlaw who kicks off the story. Miike doesn’t share Tarantino’s rabid fandom for big screen replication, but the details in the film are rendered with large handfuls of affection. Working the Leone vibe to more artificial ends, Miike and his production crew bathe the film in Western motifs, exaggerated widescreen lensing, Morricone-style music cues, and thoroughly utilizes a known sound effects library to a point of giddiness. Much like the titular dish, the film is an anything-goes stew of imagination, taking design cues from multiple eras to fashion an experience that overwhelms with detailed grit and eye-catching polish.

The film’s potent visuals are really what “Sukiyaki” is all about. Miike is less interested in the story, which reheats “Yojimbo” twists and turns, with the film adding in more slapstick and Miike’s specialty: unswerving, operatic violence. The anachronistic look of the piece is something to behold, keeping the feature involving when the story runs completely out of gas early on and the cast, performing the film in English (you haven’t lived until you've heard a Japanese actor use the phrase “Whistling Dixie” in a sentence), can barely hurdle their lines. The English is a strange choice from Miike, but then again, it fits along cheerfully with the piercings, tattered punk clothes, and bullet-stopping heroics the rest of the film prides itself on.

“Sukiyaki” is a highly stylized motion picture and, while difficult to invest in, will offer a more prepared viewer a heightened, bullet-drenched good time. It’s worth a look for Momoi’s barnstorming performance as the dreaded “Bloody Benten,” an opportunity to embrace the sorely missed profusion of spaghetti western melodrama, and to see Miike create a film that is powered solely on nostalgia and ridiculous matinee enchantment. 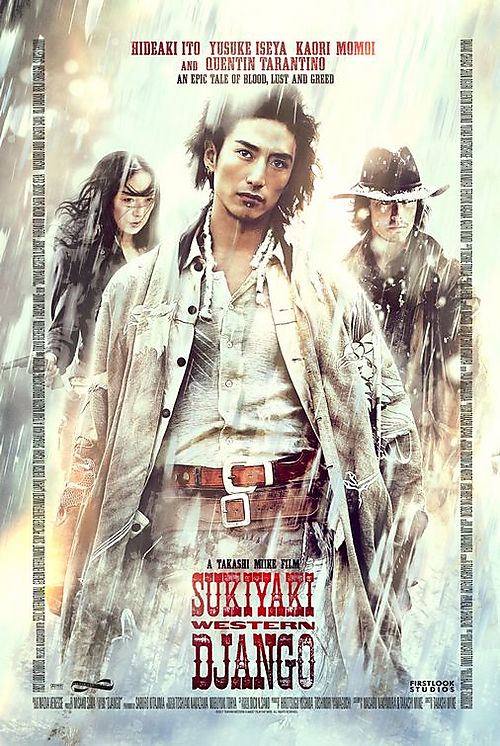