Noah (Dax Shepard) is trying to settle down with his ovulating wife Clare (Liv Tyler), searching for gainful employment to support their future family. Into their home comes Noah’s mother Marilyn (Diane Keaton), a diabetic motormouth who loves to insert herself into her son’s life. Marilyn starts to cause havoc in the home immediately, insisting her husband is cheating on her and taking a carpet sales job alongside Noah. Bursting with frustration and forced to sabotage his elaborate plans for procreation, Noah gradually comes to identify with his mother’s troubles, eager to finally communicate with her on a level she understands.

Ok, to be fair, it’s not really Diane Keaton who stinks up the screen alone in these pictures. With “Mama’s Boy,” Keaton was paired up with Jon Heder. Ouch. “Smother” combines the absent-minded slapstick of Keaton with Dax Shepard. Even more ouch. An agonizingly sarcastic performer, Shepard is not a funny fellow, and even less of a leading man. Tossing around one-liners with all the easygoing, everyman appeal of a biopsy, “Smother” balances almost entirely on Shepard’s fragile shoulders and he’s nowhere near the ace comedian to be leading the heavily improvisational laugh brigade. I’ve always regarded Shepard as a short term Hollywood goof, yet “Smother” shows explicit career ambition from the former “Punk’d” star that makes a few promises I don’t want to see kept.

The rest of the cast is handcuffed by the viciously sitcom screenplay, swimming upstream trying to make the hoariest of comedic situations (drunken karaoke, awkward eulogizing, and career humiliations) work under the robotic direction of Vince Di Meglio. Keaton does her spaz routine as the titular troublemaker, Tyler is kept in her underwear (no complaint here, but the role is shockingly beneath her), and screenwriter Mike White shows up in a supporting role as a clueless screenwriter (har-har). There’s no invention to enjoy, just one-dimensional predictability that’s perfectly pre-digested for airline showings and dental waiting rooms, and the weight of this laugh-free production is suffocating.

Without any perceptible effort from the production, “Smother” should be quickly deduced as serious waste of time. Remember when Diane Keaton was once choosy with her roles, waiting years to appear on the big screen in just the right starring vehicles? If the prospect of sharing the frame with Dax Shepard now makes Keaton sprint to the set with pride, it’s obvious those award-winning, reputation-fostering days are over. 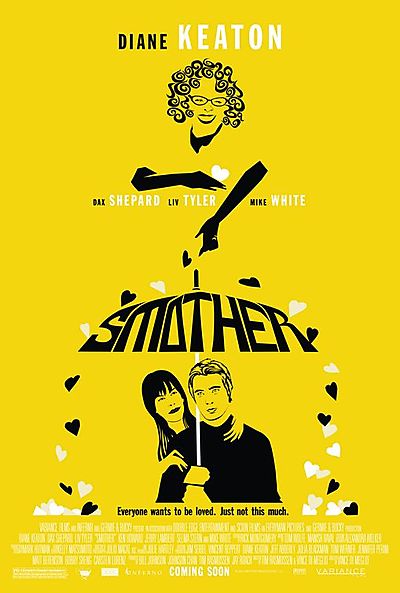