Trying to juggle the demands of her kids and her husband’s attempts at reconciliation after an affair, Adrienne (Diane Lane) takes off to the North Carolina coastal town of Rodanthe to play manager for the week at her friend’s bed and breakfast beachfront establishment. The only guest during a stormy weekend is Paul (Richard Gere), a troubled doctor looking to sort out his life in the town, attempting to work up the courage to eventually confront his estranged son (James Franco) in South America. Drawn together through conversation, Adrienne and Paul open up their hearts to each other, leading to an attraction consummated during the fury of a hurricane, followed by promises of commitment that will test this newfound love to the fullest.

Adapted from the novel by Nicholas Sparks (“The Notebook,” “Message in a Bottle”) there’s an implicit promise made from the first frame that any instance of subtlety will be booted from the proceedings immediately. It’s a promise kept by director George C. Wolfe (“Lackawanna Blues”), who carries “Rodanthe” gently, nurturing the coastal locations and tender performances into a heady froth of melodrama, using Sparks’s way with adult-oriented, hot-blooded entanglements to anticipated compassionate results. While he certainly gets a bit carried away in the editing room to induce a chaotic sense of Rodanthe and its multitude of homespun sensorial delights, Wolfe contributes a spongy tone, allowing his actors to do their appropriate tango of attraction without much fuss emerging from behind the camera.

Reteaming after their 2002 success “Unfaithful,” Richard Gere and Diane Lane solidify a suggestion of excellence made six years back. Flush with a palpable sense of professional respect, Lane and Gere once again showcase their fluid chemistry, instilling Adrienne and Paul with a persuasive electricity that’s born not out of artificial writing, but emerges progressively from the lonely soul. The characters ache to connect, and the actors communicate the lofty, admittedly cringy motivation (a hurricane?) with feverish authenticity, keeping tabs on the heightened romantic aspects of the pairing and the plausible pantomimes of attraction. These two should do a series of movies together, for their celluloid connection is so deeply felt and real, it elevates “Rodanthe” past any insincerity to a satisfying emotional plateau. Lane and Gere breathe life into “Rodanthe” with their commitment to utter romantic inebriation, and the demonstrative spirit the duo provide the camera is the best antidote to Sparks’s often crushing plot twists and gradual descent into misfortune.

While Peter combats his inner medical hazard demons and Adrienne is faced with colossal pressure to heal raw marital wounds, “Rodanthe” has plenty to concern itself with, and I was stunned to behold how well Wolfe was able to maintain momentum, even when the film moves past the beach house bed hopping and heads off toward long-distance affirmations of adoration. While it doesn’t reach “Notebook” levels of romantic hysteria, “Rodanthe” nevertheless packs quite a climatic punch, performed with exquisite delicacy and naked emotional bravery by the actors. The feature is filled with unmistakable manipulation, but it’s carried out with such endearing fragility and soulful dedication that’s nearly impossible to refuse. As middle-age sex fantasies/shameless tearjerkers go, “Nights in Rodanthe” hits a startling amount of tender notes. 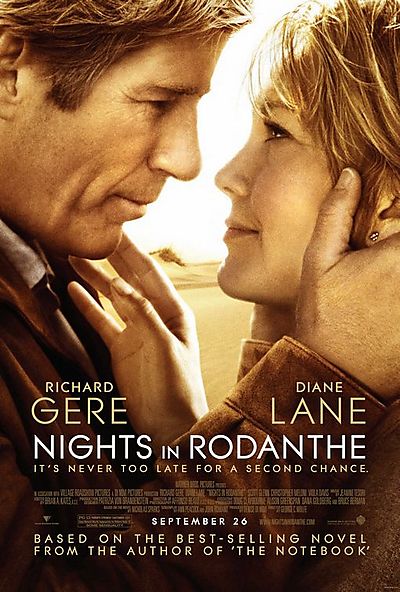 Act as tough as you want Orndorf, you are a total romantic at heart :)