“My Best Friend’s Girl” is Cook’s third attempt to turn himself into box office gold, and he’s wised up for this effort, luring Kate Hudson and her fan base into the fold for this round of slapstick. However, there could be a supporting turn from Will Smith, gas gift cards under every theater seat, and certified proof who killed JFK revealed only after the end credits and it still wouldn’t salvage Cook’s remarkable ability to select the worst possible starring vehicles for himself. “Girl” is just another step in the multiplex mangling of Cook’s once proud name.

Dustin (Jason Biggs) is a lovesick stooge who pines daily for his ex-girlfriend, Alexis (Kate Hudson). Hoping to win her back, Dustin asks loutish friend Tank (Dane Cook) to take Alexis out on a hideous date to show her how good she had it when she spent time with a nice guy. The plan immediately backfires when Alexis becomes involved with Tank, sending Dustin into a tailspin where he reconsiders his polite attitude towards women. Now stuck with a girlfriend, Tank finds he’s falling in love with Alexis, a perfect contradiction to his professional lothario ways. As the two try to preserve a relationship, Dustin grows increasingly disgusted, leading Tank to reconsider his errant ways.

It just isn’t enough for Dane Cook to make lousy comedies (“Employee of the Month,” “Good Luck Chuck”), the man now has his own formula for failure. The screenplay by Jordan Cahan is programmed to follow the basic Cook rules: introduce obnoxious bastard, challenge obnoxious bastard, and have obnoxious bastard redeemed. It’s a template followed to the letter in “Girl,” a terrifically awful comedy that doesn’t even desire to be funny after introductions are made. The picture depends completely on Cook’s whiplash way with a punchline, and if that’s the only thing propping up the jokes, the audience might as well pack up and head back home after the opening titles.

Controversial statement coming: Cook can be hilarious. There, I said it. I’m simply mystified with his big screen acting selections. “Girl” is an unimaginative, careless romantic comedy that prides itself on vulgarity and sincerity, mixing the qualities to putrid results. Cook made up his mind long ago that he wants to be taken seriously as a leading man. “Girl” is a sort of predictable malarkey that kills careers; it’s a calculated attempt to woo the men with genital-based humor and tickle women with some romantic jousting. The formula has worked before, but Cahan’s script is a simpleminded effort perfect for anyone who’s never actually seen a movie before, and who does the production rope in to direct? Howard Deutch, the mastermind behind “Grumpier Old Men," "The Odd Couple II,” and “The Whole Ten Yards.” Why not let Cook helm this junk himself?

There’s really not much to say about “Girl” outside of the basics: it’s an outrageously unfunny picture, the sex jokes reek of a fifth-grader script polish, the romantic beats have been photocopied from other screenplays, and the production brought in Jason Biggs to score extra laughs. I think just including the name “Jason Biggs” and the word “comedy” in the same sentence makes this review illegal in 17 states. He’s awful, Hudson is bored trying to decode a brazenly one-note character, co-star Lizzy Caplan is somewhere in orbit doing her best Andrew Dice Clay impression, Alec Baldwin (as Tank’s revolting father) is making an alimony payment, and Cook finds himself hilarious when he’s actually quite the opposite in a very vivid manner.

When “My Best Friend’s Girl” stops the laughs completely to sort out the emotional shards left behind by Tank’s destructive mission, it comes off like an elaborate prank played on a viewer to watch the movie take itself so seriously, as though an earlier scene of Tank simulating cunninglingus with a piece of dinner-special fish never even existed. I’m supposed to care about these characters now? If Cook wants to make a comedy, he should just make a goddamn comedy. Injecting sickening artificial sentiment into everything he does only hastens his eventual cowboy ride into cultural obscurity, it doesn’t prevent it. 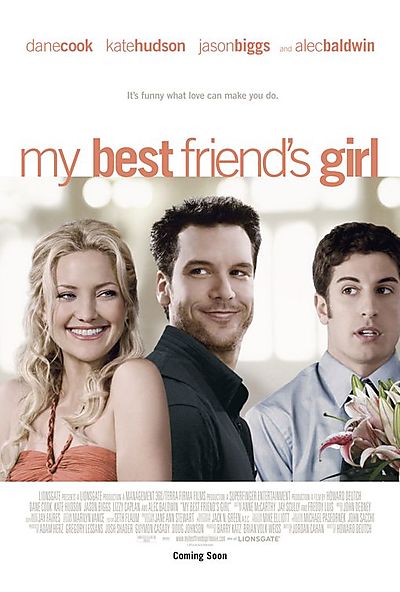 I remember a time when I was PUMPED to see Dane in the movies...just the trailer for this one seems painful.

I'm with you. Jason Biggs is fashioning himself off as the next Woody Allen, and the results are painful (even his face in the photo has me nauseous). And yes, Dane Cook has the opportunity to have a good film, but with the scripts he's chosen, his haters gather further.