Holden Caulfield syndrome is given poignant, unexpected psychosexual touches in David Mackenzie’s “Mister Foe” (“Hallam Foe” outside of America). An engrossing, provocative drama, the feature sniffs out just the right level of lurid behavior to keep the viewer in concert with the mounting domestic woes. It’s a feature of unpredicted, and quite thrilling, discomfort.

Hallam Foe (Jamie Bell, “Jumper,” “Billy Elliot”) is a troubled Scottish teenager, devastated by the death of his mother. Living with his father (Ciaran Hinds) and stepmother (Claire Forlani, finally showing some depth as an actress), Hallam spends his time as a peeping tom, observing his neighbors while working out his own psychological distortions. When a failed attack on his stepmother pushes him to move to Edinburgh, Hallam takes a job at a hotel, where he spies Kate (Sophia Myles), the spitting image of his late mother. Quickly consumed with her every move, Hallam takes up residence in a nearby clock tower and obsessively watches Kate, unexpectedly becoming her lover, confusing the vulnerable boy further.

Hallam Foe is a richly textured character, imparted with a psychologically smashed core of bitterness, abusing the social experiences of others to subdue his festering mind. It’s a complex personality that director Mackenzie explores to satisfying ends. He’s a boy who can’t get past the mystery of his mother’s death: accusing his stepmother of murder and retreating to private spaces of extreme height where he stumbles through highly-theatrical passes at generating his mother’s spirit. Foe is closed off to the world, sensitive to abandonment, and ready for a fight.

The nuance of the character (originating from the Peter Jinks novel) is sold masterfully by Bell and Mackenzie, with both men forgoing a sympathetic pull for Hallam to observe his vicious withdrawal. “Mister Foe” is not an easy film to watch at times, especially when Hallam’s behavior leads to twitches of extreme paranoia and gender-questioning displays of ache. Still, the picture is able to provide some understanding for the teen, which is needed when the story starts settling down, pushing Hallam to confront his own misery through a dalliance with an equally perverse Kate.

Shot against lovely country locations (woodsy and forbidding), along with vivid cityscapes (including Hallam’s makeshift clock home), “Hallam Foe” is best when spotlighting the teen’s almost innocent voyeurism, which finds the boy climbing all over the place to get a perfect glimpse of random lives. Hallam’s flirtations with Kate are informed with these acts of invasion, unnerving the drama and complicating Hallam’s crucial comfort of distance. Again, Bell is extraordinary, matched beautifully by Myles as the two futilely try to maneuver a common sexual relationship built on curiosity and embarrassment.

The climax of the picture leans toward extreme catharsis, paying off Hallam’s lipstick-war-paint and road-kill tribal wardrobe with perhaps too much attention to a customary cinematic finishing move. The film survives the exaggerated conclusion, soon readjusting itself as a beguiling psychosomatic episode that colorfully details the collateral damage of unresolved grief. 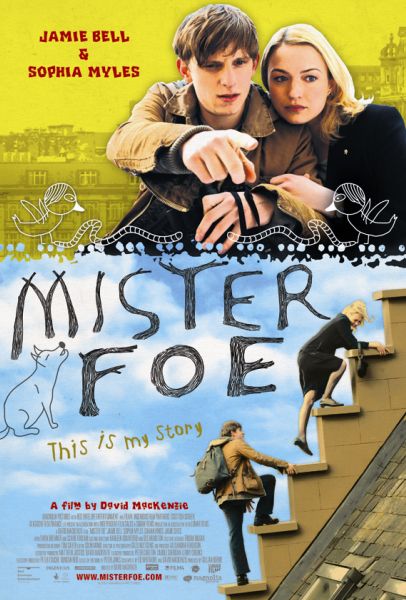