In 1944, members of the 92nd Infantry Division (the “Buffalo Soldiers”) found themselves behind enemy lines in Italy with German forces breathing down their necks. For Aubrey Stamps (Derek Luke), Bishop Cummings (Michael Ealy, spending every frame of film reminding the audience he’s wearing a gold tooth), Hector Negron (Laz Alonzo), and simpleton Sam Train (Omar Benson Miller), the situation is grim, but hope arrives when they locate an isolated village with a welcoming populace. With Nazis closing in, racism shadowing their every move, and Train finding comfort in the company of a traumatized Italian boy, the soldiers are left to fend for themselves as danger mounts and the war takes a psychological toll that radically confronts their patriotism.

“St. Anna” is not a war film. Perhaps Lee would disagree, since major time and money has been sunk into pedestrian combat zone recreations, bolstered by deafening sound effects, scads of explosions, and an exploitative, Eli Roth-like attention to bloody stubs and splattery bullet hits (even an infant bayoneting to casually remind the audience Nazis were evil). The war in this WWII picture is just a scrim; chaos being a rodeo clown to keep itchy crowds in their seat while Lee goes after his perennial brass ring: racial discord.

Scripted by James McBride (working from his own novel), “St. Anna” is viewed by Lee as the ultimate statement of justice; his chance to bring the African-American wartime experience to the big screen, literally thumbing his nose at John Wayne and all the whitewashed history his jingoistic kind represents. It’s an admirable effort, certainly a worthwhile opinion, yet “St. Anna” is a crushingly glacial and superficial fiasco from Lee, who has abandoned his sense of limitation and nuance to lustfully plant his flag as the savior of black history. As an insightful statement on the racial injustice of the segregated Buffalo Soldiers, “St. Anna” reduces the achievements of these brave men to shallow sequences of southern-fried bigotry and needlessly amplified line readings that dip a toe into self-parody, not to mention overall performances that feel like deleted scenes from Lee’s own “Bamboozled.”

Lee is craving an epic scope in a limited location. McBride’s script is replete with characters and motivations to load the dramatic plate to a breaking point, bringing in: compassionate Italian resistance figures, a subplot with the Gumpesque Train and his newfound charge, the successful sexual harassment of the village’s most attractive female (a soft-core diversion that has no place here), and the hayseed leadership of the U.S. forces, who are more than willing to lead their African-American soldiers to the slaughter to sate their unbridled prejudice (performed with Larry the Cable Guy-style flamboyance by Walton Goggins).

Also, there’s the film’s implausible framing device, establishing Negron as the composed murderer of a familiar postal customer in 1983, leading to the discovery of an important Italian artifact in his apartment that stokes the curiosity of an inexperienced newspaper reporter (Joseph Gordon-Levitt). It’s a grand setup to a movie that never bothers to match its compelling commencement, electing to get lost in meandering dialogue, vague philosophical plotting, and a rudimentary portrayal of Nazism straight out of “Indiana Jones and the Last Crusade.” The topper? Lee takes 160 minutes of screentime to arrive at a point of utter inconsequence. I swear the film feels like it takes five years to finish.

With Terence Blanchard’s wall-to-wall score clumsily pushing broad themes at all the wrong moments and Lee stuffing bizarre cameos everywhere, “St. Anna” isn’t just a mess, it’s a deliberate muddle. With Lee it’s always been all or nothing, but this picture, above all his other work, is aiming to rewrite the history books, a film with a direct purpose. Why Lee didn’t settle down and sort out his dramatic priorities before production began is a question I cannot answer, but “Miracle at St. Anna” is as disorganized, unfulfilling, and lifeless a picture as Lee is capable of making. 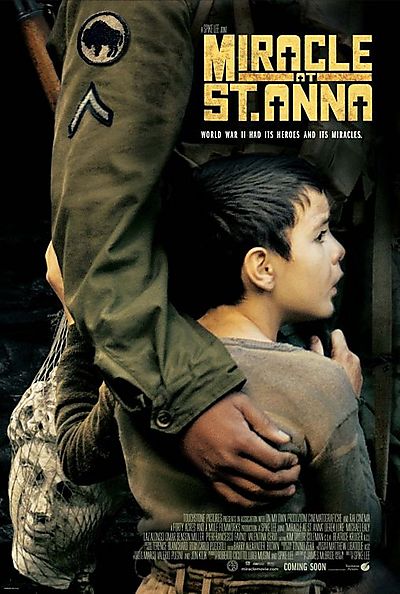 I'm so happy to hear that this sucks, you have no idea.

By the way, in before "BRIAN UR RACIST!"

Spiteful Wee( i.e. full of spite and he's a wee little racist shit ), is total Black racist( Yes, Spite, Black people CAN be racist ),PERIOD. He doesn't make movies, he makes propaganda - Blame Whitey/Hate Whitey/Kill Whitey/Black are totally justified in killing Whitey anytime-because Whitey-enslaved-and-brutalized us-po' Blacks( As opposed to,at the same time, your people and their Arab/Muslim "brothers" - The Moors,Corsairs,and Barbary Pirates - in North Africa enslaved White Europeans,invading villages from Italy ,all the way up to Iceland,kidnapped hundred or thousands of Whites,dragged them back to North Africa ,for slaves for Sultans,Pashas,Sheiks,etc, for 300+ years,most never making it back alive - but that's all right,they were only Whites )-propaganda.

And after 20+ years,the little loser still makes movies like someone who's never operated a single movie camera; the camera work is always either too close ,too far,ever camera angle is off or flat-out wrong,unnecessarily titlted,ham-fisted,the lighting always bad,the wrong lenses,and edited too short or too long - the exact same styles that one found in the horrid,blaxploitation flicks of the '70s.In a word:amateurish,even after 20+ years.But I'm sure ignorant,black racists in the ghettos and in academe,"poets","intelectuals",rappers,actors like Jamie Foxx,"comedians",etc, too stupid to know the difference won't mind,as they will get the Hate Whitey propaganda,and screechy preaching that Black racists want to hear in typical,Spite Wee garbage.

Spiteful Wee? That's one of the dumbest things I've ever read, Vlad. Congratulations.

The worst war movie I have ever seen this side of a direct to DVD epic. Historically inaccurate, implausible, and ridiculous etc. Everything from the combat tactics of the day (if both sides had fought like they did in the movie, casualty rates would have been easily 98%), to the incorrectly hanging American flag over the "general's door". This movie sucked. St. Anna takes a dump on the honor and sacrifice that the true Buffalo soldiers endured all the while replacing it with "white ain't right" propoganda.

I apologize to all of the black men that fought in WWII. This movie is a grave injustice to their memory.

They make better films on the scifi network.