Moving into an idyllic Californian community, interracial couple Chris (Patrick Wilson) and Lisa (Kerry Washington) are eager to start their dream life together. Living next door is police officer Abel Turner (Samuel L. Jackson, doing the traditional Jackson shuffle), a widowed father of two who doesn’t take kindly to the pairing paraded in front of him. While Chris considers Abel’s initial hostile neighborly invasions to be the stuff of common misunderstanding, it becomes clear that the cop is dead serious about the couple moving out. Trying to mount something of a counter attack, Chris learns the true power of Abel’s badge and the reach of his threatening ways.

This isn’t the first time LaBute has worked without the comfort zone of his own screenplay, yet “Lakeview Terrace” feels devoid of anything LaBute is known for, even with a plot that picks away at unnerving, humiliating situations at the hands of the morally corrupt (LaBute’s bread and butter). The filmmaker is on autopilot, going through the motions with this flaccid story; it’s a survival piece of moviemaking, not an authoritative one. The script by David Loughery and Howard Korder instead works customary “Unlawful Entry” moments of intimidation and helplessness, as Chris and Lisa strain under Abel’s thumb, unable to retaliate through expected legal channels, or even the suburban justice David craves.

Considering the plot takes on severe racial and domestic antagonism issues, LaBute would likely be the one to make the material sing. Instead “Terrace” puts the filmmaker into a PG-13 half nelson that he can’t escape from, neutering the movie’s efforts to shade the central conflict a pleasing color of grey for optimal audience manipulation. The early head-butting between Chris and Abel shows wonderful promise, both in concentration of suspense and in performance, with Wilson and Jackson having a grand time as the combative, suspicious neighbors. Sadly, the film sours quickly as LaBute is powerless to explore the tension to more perverse conclusions that could snap the film awake.

By the last act, LaBute’s batteries run down and the plot slips into formulaic thriller mode, moving the premise from an encouraging place of terror to an obvious one, sending the film out on a substandard note. Granted, this is hardly “Wicker Man 2: NOT THE BEES!,” but LaBute should be counted on for a movie with more teeth than what “Lakeview Terrace” is prepared to offer. 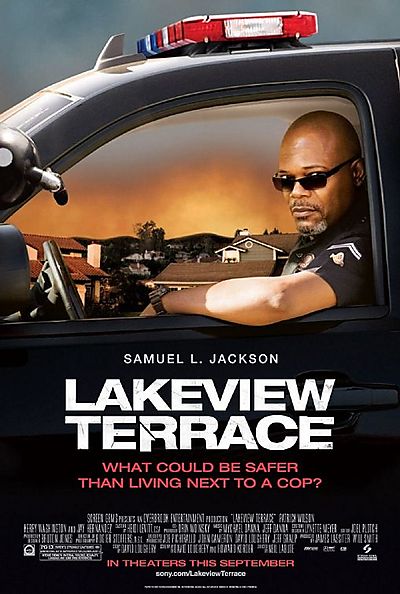