In a far away land called Malaria, evil deeds are encouraged by King Malbert (voiced by Jay Leno) and his population of mad scientists. With the help of their assisting Igors, the scientists are preparing for the annual fair to show off their accomplishments, and the cunning Schadenfreude (Eddie Izzard) is ready to take home the gold again. When Igor (John Cusack) finds his dimwitted master Dr. Glickenstein (John Cleese) killed by his own stupidity, the brilliant young college-educated toady fills in with a special offering: a humongous disfigured monster named Eva (Molly Shannon). Created for nefarious purposes, Igor is shocked to find Eva is a kindly soul who wants nothing more than to become an actress, encouraging the jealous wrath of Schadenfreude and his shape-shifting girlfriend, Jaclyn (Jennifer Coolidge).

While I’m positive it was created with the best of intentions, it’s nearly impossible to examine “Igor” and not notice the serious “Nightmare Before Christmas” similarities that litter the motion picture. The parallels are drawn most severely in the angular, ghoulish character designs, with the animation a near photocopy of Burton’s cult classic, viewed most uncomfortably in the King Malbert character. It’s truly difficult to register the connection as tribute or robbery, and it pulls apart what little fun there is to savor in “Igor.”

Step beyond the mimicry, and “Igor” has other problems to solve, including an irreverent tone lifted from “Shrek” (a screenwriting quirk that needs to be flushed from family films permanently) and some curious targets for jokes, one itchy riff pointed at a Malaria school for blind kids. There’s some great discomfort there.

However, “Igor” has some spring to its step courtesy of the Louis Prima soundtrack and the voice cast, who put in a game effort trying to accurately navigate the screenplay’s sense of humor and keep character arcs clear as a bell. Cusack and Shannon impressed me the most here, making for a sweet odd couple (she’s as big as a house, he’s about as tall as the doorknob), with Cusack showing atypical interest in maintaining an upbeat delivery. Special support comes from Steve Buscemi and Sean Hayes as Igor’s previous failed monster experiments, which come to the aid of their creator with a healthy offering of slapstick and sarcastic wit.

Frantically directed by Anthony Leondis (“Lilo and Stitch 2”), who slings the camera around as if this was a jackhammer Michael Bay animated production, “Igor” has a few fine moments of macabre mischief to enjoy before mediocrity sets in, along with a huge amount of distasteful chaos. “Igor” is crafty, just never triumphant or enchanting, trying too hard to ape previous morbid comedies and not focusing on the obvious problems at hand. 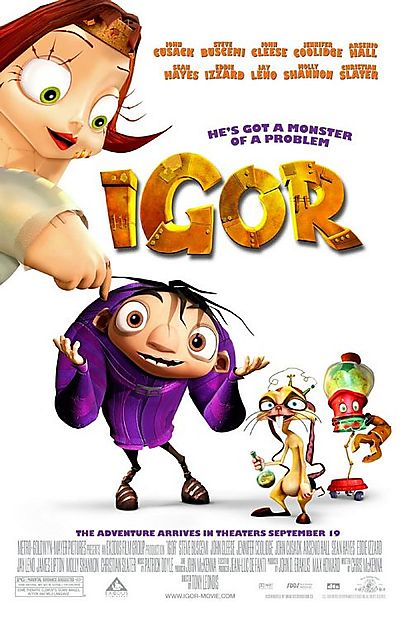