Bertram Pincus (Ricky Gervais) is a misanthropic dentist preparing himself for the humiliation of a colonoscopy. At the hospital, Pincus actually dies for seven minutes, and when he reawakens, he’s gifted the ability to see dead people. The departed leap at the chance to communicate with the living, pestering Pincus to help them right their wrongs. The irascible dentist is greatly bothered, but when suave ghost Frank (Greg Kinnear) steps forward with a request and a promise to make all the voices stop, Pincus listens. The mission: Frank wants the ghost whisperer to break up the engagement of his widow (Tea Leoni) using Pincus’s anti-social manners as the relationship poison. Pincus is happy to comply, but soon finds himself falling for the women he’s meant to torture.

Writer/director David Koepp has fashioned his filmmaking career out of taking genre chances with dicey material (“Secret Window,” “The Trigger Effect,” “Stir of Echoes”). Perhaps “Ghost Town” is a reaction to the middling box office results. Here, Koepp is making a fairy tale of a sour heart redeemed by extraordinary circumstances, using common tricks to tell a familiar story, and one that will surely yield him his largest audience to date.

It’s not the aching familiarity of “Ghost Town” that truly bothers me, it’s the constantly shifting tones. With Gervais making his starring debut here, there’s an implicit promise of a cunning comedy, where the actor can run free with his gifts for improvisation and test out his romantic lead charms. Gervais is up for the task, handing in a familiar performance of dry Brit quirk, stuttery improvs, and a delicate interpretation of social awkwardness. I personally found Gervais’s occasional yammering to be sledgehammer on the senses, but fans should easily lock in on what the actor is trying to achieve here. When deployed with the utmost concern for timing, Gervais is a scream and churns up some interesting romantic chemistry with Leoni.

The first half of the film is a simple cocktail of slapstick and improvisational situations with Pincus and the ghosts, and how the tempestuous relationship between the two wears down the dentist’s patience. Once the comedic and romantic lines are drawn, Koepp feels the need to reach for the heartstrings, and “Ghost Town” starts begging for tears.

Granted, the syrup poured here is mildly effective, especially when Pincus begins to fulfill his band-aid promise as a ghost spokesman. Gervais plays the sympathy wonderfully, but Koepp loses his balance by switching the tone so abruptly, removing the comfort of humor to reach for emotional and psychological enormity. It’s a hasty feel-good downshift in a story that can’t support it, turning a passable film into a mawkish cry to heal the world.

Ping-ponging between laughs and tears turns “Ghost Town” into indigestible jelly. Surely Koepp’s intent is sincere, but throttling the laughs so violently douses the few daring fumes of merriment that have managed to stick around. “Ghost Town” is left an undistinguished bubble, not profound enough to engorge the heart and wasting Gervais on pedestrian scripting conformity. And yes, the absence of Jennifer Love Hewitt hurts it too. 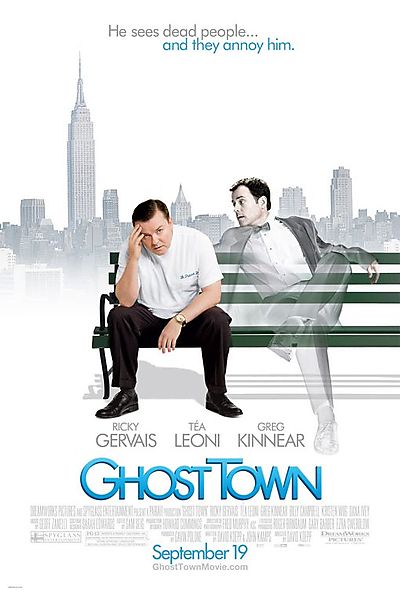