Reeling from the death of his twin brother, Jerry Shaw (Shia LeBeouf, in full slack-jawed, sprinting mode) has returned to his apartment only to find a wealth of terrorist machinery waiting for him and federal agents on their way (Billy Bob Thornton, Rosario Dawson). Contacting him on his cell phone is a female voice (Julianne Moore) with specific instructions for escape, using all means of technology to guide Jerry to an unknown destination. Teamed up with frightened single mother Rachel Holloman (Michelle Monaghan), the unlikely pair is forced to carry out several crimes as they make their way across state lines toward Washington D.C., and the possibility of a cataclysmic terrorist strike, orchestrated by an unknown, all-knowing force.

The premise for “Eagle Eye” hinges on our intimate world of cell phones and security cameras, and how that casual invasion of privacy could be used against us by any force, be it friend or foe. Of course, Hollywood doesn’t have the greatest track record when it comes to making cutting-edge gadgetry the stuff of classic thrillers, yet “Eagle Eye” gets off to a fantastic start, setting up Jerry as a target for a mysterious terrorist organization who knows his every move and perhaps every thought. The character has no way out of his predicament, and fighting the menacing entity only makes matters worse. Caruso achieves an enveloping sense of hopelessness and tension for the story, nicely captured in LeBeouf and Monaghan’s twitchy performances. “Eagle Eye” opens with a bang, with passable characterization and a few pulse-quickening developments that prey upon current terrorism fears.

However, “Eagle Eye” is not an understated, worrisome thriller. It’s an action fiesta, and Caruso, flush from his sleeper success with last year’s “Disturbia,” feels confident enough to try a plethora of big-budget stunts on for size. Unfortunately, Caruso isn’t interested in breaking new ground, instead he sets up a formulaic game of “Mouse Trap” for the characters, stealing from the big Bay book of blow-em-ups to lazily engage the audience in a manner they’re used to. After such a promising launch, the picture swerves toward complete visual incomprehension, with the editing rhythms cranked to an infuriating blur, the cinematography assuming trendy acid-washed colors and lighting schemes, and Caruso electing noise over skill.

It’s truly a Michael Bay film, frosted with a tuneless score by Brian Tyler, themes of a threatened America, and a porno-style dissection of military and political might. Caruso isn’t exactly Fassbinder, but much was expected of him after his stellar work on 2002’s “The Salton Sea.” “Eagle Eye” is junk food, but worse, it’s comatose, predictable, and a facsimile of nearly every action film over the last 10 years, down to a multitude of repetitive, zoom-happy car chases. There’s a whole world worth scrutinizing for every last drop of paranoia and corruption, and all Caruso wants to do is crash a dealership worth of cars. What happened to this guy?

Another quandary facing “Eagle Eye” is logic. It’s certainly a pip to watch Jerry and Rachel scurry around under the watchful stare of the troublemakers in charge, allowing the film plenty of room for sizable product placement and significant hysteria. Unfortunately, the actual Eagle Eye of “Eagle Eye” isn’t nearly as fantastic, fearsome, or devious as it should be. Actually, it’s quite laughable, but for the sake of those sensitive to spoilers, I’ll leave it with this: it seems the screenwriters loved “2001,” “WarGames,” and “The Terminator” so much, they decided to pluck what they needed to fill their own creative pockets, even cribbing from Hitchcock for the grand finale.

“Eagle Eye” is a major disappointment, taking a topical (albeit heightened to a comical degree) technological subject and turning it into action pabulum for a saturated market. 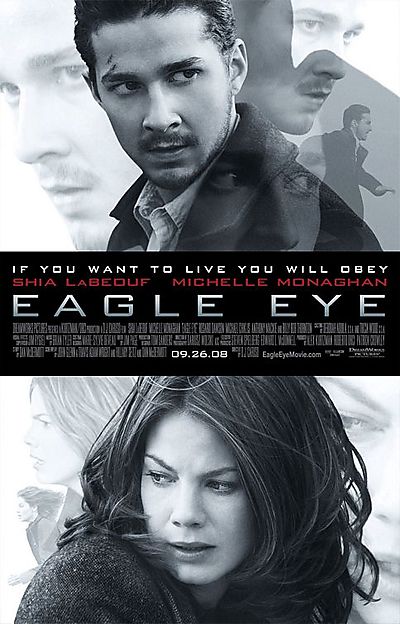