With the WTO meeting on the horizon, the Mayor (Ray Liotta) trusts all promises for peaceful demonstrations will be honored. However, the protestors, including a group (Andre Benjamin, Michelle Rodriguez, and Jennifer Carpenter) led by Jay (Martin Henderson), have more provocative plans in mind. Taking to the streets, the protestors soon number in the thousands, effectively cutting off the WTO plans, much to the sorrow of a third-world health officer (Rade Sherbedzija) hoping to open eyes with his medical reports. When peace cannot be achieved, the Mayor calls for arrests and violent crowd-dispersing maneuvers from the police, including one riot officer (Woody Harrelson) who’s enraged when informed his pregnant wife (Charlize Theron) has been assaulted during a march.

While his heart clearly leans in sympathy towards the protesting movements of the WTO riots, writer/director Stuart Townsend makes an interesting case for all sides of the conflict in “Battle for Seattle.” While not as sensitively drawn as the similar “Bloody Sunday,” “Seattle” has a particular volatile energy that Townsend nurtures to fuming satisfaction, playing on themes of injustice and desperation that always encourages hot-blooded cinema.

Townsend’s finest work is found on the Seattle streets, where the city was shut down by the numerous activists and their concentrated efforts to bring down the event using every opportunity for mayhem they could exploit. Mixing fiction with actual media coverage of the situation, Townsend gets the viewer down into the action to observe the nightmare from all corners, training his camera on every form of protest, from the peaceful, costume-wearing neo-hippies to the masked radicals, who felt that tossing newspaper dispensers through the windows of Starbucks was going to change the world. It’s a tornado of violence and confrontation that Townsend captures commendably, making the protest scenes ripe with contempt and frustration.

Where the inexperienced filmmaker fails is in the crayola screenplay, which assigns sterile speeches to every member of the cast, replacing the required eye-twitching impulse of bad decisions that marked the day. It’s impossible to take any of these characters seriously with their prepared, overwritten thoughts, acting as plastic mouthpieces to political ideals instead of raw portraits of injustice, frantic in their goals and unsure of their overall agenda. Townsend is writing clichés to support the multi-character storyline, and it deflates the tension, not to mention clouding the call to arms against the WTO Townsend is eventually proposing by the end credits.

To Townsend’s credit, there’s no absolute portrait of good vs. evil on display here. As much as the film underlines the legal mess of the event, the activists aren’t exactly saints, many resembling petulant children who hold little regard for the greater good, and even less for basic human logic, reflected brilliantly in the Sherbedzija subplot; the protestors shown to be thwarting what little promise the WTO was offering. Police and government officials are kept from condemnation as well, exposed as confused and hesitant, stepping into a backyard war zone that was never meant to be.

While stiff where it counts the most, “Battle in Seattle” does stimulate the senses, projecting rage and discontent, reminding the viewer that mobilization is a critical step toward any form of change. It’s hard to argue such passion. 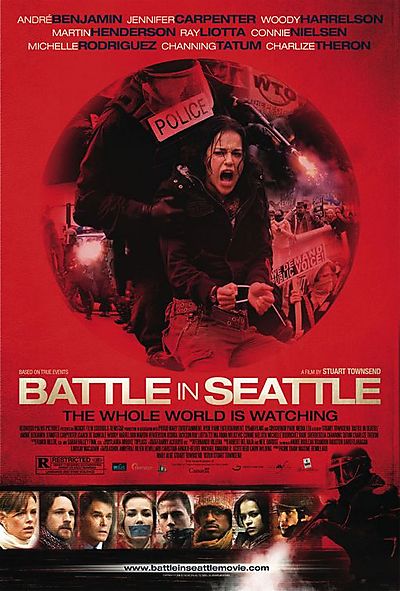