There was a time not long ago when a Nicolas Cage film would command swirling industry buzz, a spellbinding marketing push, and demand the most prestigious spot at the area multiplex to placate the stampeding masses. Today, Cage is relegated to movies that barely make a splash on the pop culture canvas, are released over one of the worst weekends to unload a feature film, and are held from the greasy grasp of movie critics out of sheer panic that word of dispiriting quality would be unleashed prematurely. This is not the Nicolas Cage I used to adore, and “Bangkok Dangerous” is not the type of dreck the once mighty prince of strange should be wasting his time with.

A hitman with a gift for stealth attacks, Joe (Nicolas Cage) is sent to Thailand to carry out a series of contract killings. Settled into a lively, impulsive environment in Bangkok, Joe hires grifter Kong (Shahkrit Yamnarm) to help him polish off his targets, soon stumbling upon a gorgeous deaf-mute pharmacist who exposes unexpected sympathies within the professional killer. Required to assassinate a leading politician, Joe finds his allegiances have changed, declining the hit, and raising the sadistic ire of the crime family that brought him to town. Now on a race to get out of Bangkok alive, Joe must consider the welfare of his new friends, leaving the once ruthless executioner vulnerable to the city’s unforgiving elements.

Remaking their cult 1999 film “Bangkok Dangerous,” the Pang Brothers (Danny and Oxide) have returned to the shallow Hollywood shores they dipped a toe in with 2007’s dreary bore, “The Messengers.” Now settled down with material familiar to their special Pang touch, it seems a foregone conclusion that the new “Bangkok” would contain the same measure of spitfire as the old “Bangkok.” However, that’s not including the Nicolas Cage factor in this assumption.

An actor of outstanding entertainment value, Cage doesn’t always fit snugly inside material in the same heroic manner he imagines. The actor has a way of weighing down movies where he’s woefully miscast, draining the life out of screenplays that should conceivably be a total gas. “Bangkok” is a prime example of Cage wedged into the wrong film. He’s a comatose, bewigged force here; a drab screenwriting cliché in search of directorial muster to make the character passably dimensional. Leaving matters of coherence to the Pang Brothers is a huge mistake, and it leaves Cage hanging during the picture. Joe is equal parts Miyagi and murderer, offering Cage a platter of reactions and impulses to enjoy. It’s a crime he’s such a dour screen presence in the picture. Without any Cagey tics and bops to wake up the proceedings, there’s nothing in “Bangkok” worth investing in.

It’s hard to discern what is so appealing about the Pangs. They’re an extremely clichéd pair of filmmakers, indulging in every trendy editing and photography tool around to conjure up a threatening world for Joe to wade through. “Bangkok” should be a dense visual feast of inhospitable foreign lands, but it seems someone on the crew forgot to plug in the lights.

The film is shot so impossibly dark (and predictably transformed into a bland acid-washed visual experience by the color-phobic goons that currently run the post facilities), it’s difficult to stay close to the few pockets of action the film indulges in. Maybe this is the Pangs’ way of keeping the eye off the obvious deficiencies of the filmmaking, but it’s maddening, leaving me aching for someone in the cast to spark up a lighter or flick open a cell phone for just a few more levels of illumination.

There’s never an instant in “Bangkok” where the story feels motivated by emotion. Joe’s eventual thaw is fumbled by the Pangs’ unfamiliarity with sentiment, and it makes the film’s eventual slide into sacrifice hard to swallow. It leads to a somewhat daring ending (for Cage at least), but it’s attached to the wrong film. “Bangkok Dangerous” is a shallow picture, not something that’s capable of suggesting grand displays of salvation. The film is a bore, not a heartbreaker, a reaction that’s reinforced by a few moments of extreme gore tossed around to jolt the audience awake. It’s hard to be a romantic tragedy when boat propellers are chopping hands off. Something tells me that’ll lose the female audience. 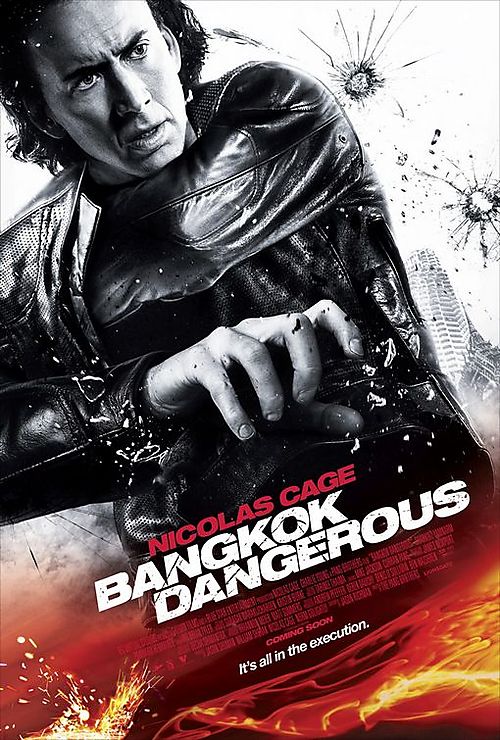