One of the most legendary, exalted cult films of the 1980s finally finds its way to DVD, after years of underground presentations, random cable airings, and bootleg proliferation. It’s a picture that’s credited as one of the founding mothers of the “riot grrl” movement, inspiring the likes of Courtney Love to go out into the world and challenge the misogynistic carnival of rock music, empowering the minority feminine perspective. It’s also a feature that befuddled a studio, rising up from the ashes of blatant corporate indifference to become a defining snapshot of an era, challenging the masses to find the feature and experience a piece of art held back purposefully from view.

And you know what? It’s really not that strong of a movie.

Orphaned and trapped in a depressed Midwest factory town, teenager Corinne Burns (Diane Lane) is filled with rage and ready to leave her constrictive life behind. Corrine finds her inspiration when she catches punk band The Looters at the local club. Asking for a break, Corinne’s amateur band, The Stains (with Laura Dern and Marin Kanter), joins the tour, opening up a whole new world for these impressionable young women. Using a highly-charged stream of feminism to backdrop the band, Corrine’s onstage rants lure the attention of the press, who turn The Stains into stars, complete with a legion of disaffected, lookalike fans. Finding her relationship with Looter’s singer Billy (Ray Winstone, mixing sympathy with forceful knuckle-sandwich savageness) is becoming a liability, Corrine takes the band to the next level of fame, threatening her own integrity when the financial and publicity vultures start to swoop in.

“Fabulous” pinpoints a time and place where rock and punk were brawling; an era when melodic rage spoke to a global community of outcasts, urging them to take control of the airwaves and jump-start a revolution. Take “Fabulous” as a time machine to the late ‘70s, and the picture retains a pungent air of appetizing defiance, contrasting the intended vitriol of the sounds with the inhospitable music business machine, which willingly chews up and spits out any statement, no matter the integrity.

Director Lou Adler and writer Nancy Dowd (who disowned the film, credited here as “Rob Morton”) are reaching for a cautionary tale/satire of the music industry, following The Stains on their meteoric rise from pitiable teenage girls who loathe authority figures to voices of a generation. The band uses their punk haircuts and style (think a flat-chested, virginal Wendy O. Williams) to spawn a horde of “skunks,” who take Corrine’s feminist message seriously, turning the band into a religion. The concept of “Fabulous” is crystal clear, but the execution of the film is a disorganized splatter of motivations, studio-mandated recutting, and half-realized subplots. It’s as though “Fabulous” is an 85-minute trailer for a better feature that once existed on the page.

However befuddling the final product is, Adler does retain an impressive feel for the scrappy story, harnessing the raw power of the musical acts while observing their confused state of mind on the road. With a cast that includes Fee Waybill of The Tubes (playing an aging, delusional rocker), Paul Simonon of The Clash, and Paul Cook and Steve Jones of The Sex Pistols, there’s a certain verisimilitude to the film that mercifully overcomes the feeble storytelling. 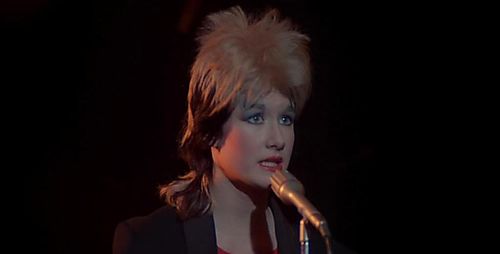 The performance footage is perhaps the defining characteristic of “Fabulous,” from the punk roar of The Looters (with their hit “Join the Professionals”) to the semi-performance art meow of The Stains, who can barely play their instruments, yet carry a message that’s more influential than any stack of amps. While Adler strangely hinges some of an action around close-ups of breasts and crotches, he nevertheless achieves a low-budget wonderland of snarled stances and careless, road-weary heartbreak. If only the picture had an ounce of narrative clarity to accompany the infrequent burst of energy.

The chopped, redubbed, and second-guessed look of the film is irritating (the MTV parody ending, shot a year after principal photography concluded, is exceptionally perplexing), taking long, hard looks at characters and impulses is some scenes, while leave the rest a shortchanged, deeply monotonous blur. Still, no matter how much the plot is bungled and streamlined, it’s impossible to extinguish the iconic performance of Diane Lane, who, at just 15 years of age, puts forth brave, credible work as the instigator of a sheer-blouse revolution. She’s all angst and smeared crimson eyeliner, triumphantly conveying cutthroat rage inside a diminutive package, making the authentic punk attitude of the cast seem cute by comparison.

Presented in anamorphic widescreen (1.85:1 aspect ratio), “Fabulous” is making its long-awaited home video debut with this DVD release, and it begs the question: this is the best they could do? Looking contrasty, with poor black levels and dreary colors, the image is perhaps the best the studio could come up with considering the notorious history behind this movie’s distribution woes, but it remains an unsatisfactory DVD viewing experience. Print dirt and scratches are prevalent during the film as well.

The 5.1 Dolby Digital mix can’t whip the dialogue into shape, with thick accents swallowed into the void at times. However, the music fares much better, with glorious soundtrack cuts bringing the surround channels into play, reproducing the performance sequences with a proper era-specific, bottom-heavy howl. A 2.0 mix is also available.

The first of two audio commentaries is provided by director Lou Adler. While a critical figure in the creation and authenticity of the picture, Alder supplies a sleepy track that contains only the barest of information. Bits on locations, Robert Altman tributes, the musical ability of the cast, and narrative construction are appealing, but Adler’s elderly kitten purr is hard to concentrate on. At the very least, Adler does touch on the feature’s release difficulties.

The second track is provided by Diane Lane and Laura Dern, and the two actresses dig deep into their memories to serve up plenty of stories from the set. Not surprisingly, the duo is quite stunned with this direct reminder of youth, and there’s plenty of hilarious giggling and mild shock watching themselves as “embryos.” Dern and Lane are honest about the film’s limitations, and seem to appreciate the picture as a time capsule, fawning over the music and their co-stars. It’s a light, informative, and warmly conversational track from two tremendously appealing talents.

And finally, a Photo Gallery with 68 stills from the film is provided.

A Theatrical Trailer has not been included on this DVD.

“Ladies and Gentlemen, the Fabulous Stains” is a magnificent retro experience, but far from a competent feature film. Still, even with the plot in complete disarray and the budget filmmaking limitations revealed all too easily, the picture remains a curiosity and an essential musical mile marker. Bear with it for a glimpse of a pre-internet world of packaged revolution and to spy an exhaustively provoked Diane Lane, taking her first baby steps toward a flawed, but fascinating career.

Regrettably, missing from this DVD is a wonderful 2000 documentary on the history of “Fabulous Stains” created for the cable program “Split Screen.” Here it is in two parts: