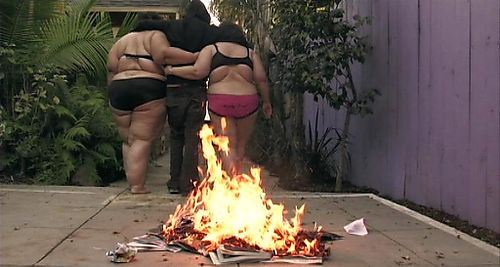 In all my years of critiquing movies, I’ve never come across a more hot potato title than “Heckler.” Ostensibly a documentary regarding the bruised feelings of entertainment folk who suffer verbal excrement flung from the great unwashed masses, “Heckler” instead reveals itself to be an attack piece on critics and their general befuddling uselessness.

The person leading this spiteful charge on the vocal minority? Jamie Kennedy.

Ok, so I exaggerate a smidge. “Heckler” is more of a confused production than a furious one, aiming to assemble a thesis on critics and their troublesome effect on the talent. It’s equal parts total goof and a serious indictment of our feverishly over-communicative culture, where everyone feels obliged to chime in with their two-cents worth of disgust. The towering wall of contempt has exhausted Kennedy, and he attempts to grasp why this phenomenon has strengthened with age.

Director Michael Addis crafts an enticing package with “Heckler,” interviewing a horde of celebrities who are eager to share their worst fears about the business. The film’s opening subject is the stand-up world, where comedians fight incredible battles with audience members who, either fueled by booze or boredom, fail to keep their traps shut and actively engage the comic during critical performance situations. It’s the titular nightmare come true.

Chatting with the likes of Lewis Black, Patton Oswalt, Maria Bamford, and David Cross, “Heckler” pricks a fascinating vein of information, not only putting the average disruptive audience member into proper perspective (even presenting psychological insight), but also touching on the ready-position anxiety of the comics, who learn quickly that they must strike back hard lest they lose the evening to the random yappy boozehound.

Dealing exclusively with comedians, “Heckler” makes perfect sense. Probing the mentality of those who nakedly perform on a cold, lonely stage, it’s riveting to hear war stories, see file footage of heckler incidents (including famous Bill Hicks and Michael Richards breakdowns), and observe their balance of rage and Zen-like comfort with the process of interruptions. Here, “Heckler” holds a purpose that’s refreshing and sporadically hilarious.

Somehow equating inebriation and attention-whore tendencies to critics, the feature swiftly turns its cannons toward the ultimate heckler: the movie reviewer.

Now, being a film critic reviewing a film about loathing film critics is a high-wire act I’m going to be extremely careful with. Certainly “Heckler” lobs a few salient points on hyperbolic writers who bring guns to a knife fight (I’m certainly guilty of overstating the obvious at times), and the more said about the internet’s crowded, blowhard field of naysayers the better. However, “Heckler” erodes once it starts to broaden the definition of a detractor, falling into clichéd, venomous paths of childish retorts and observation that drown the documentary’s eventual point.

It seems Jamie Kennedy wasn’t thrilled with the reviews he received for his work in the wretched 2005 sequel, “Son of the Mask.” His depression is the inspiration for “Heckler,” with Addis following the actor around on stand-up dates as he faces his aggressors. The confrontations don’t lead to any real resolution or purging of fears, and the scenarios have a nasty way of concluding, with Kennedy making fun of his enemies by calling their sexuality and geekdom into question, or pulling out the hoary, snide defensive retort, “so, what do you do?” I also wasn’t thrilled with Addis’s interview choices for online film critic representation: the foul-mouthed Devin Faraci and a bewildered Kevin Carr. Not even close. In fact, the film seems to view internet publishing as the bottom of the legitimacy barrel, revealing a disturbing absence of research.

To this film, if you’re online, you’re a gorilla with a crayon, waiting to smear feces on the next motion picture served up for the kill. Overall, internet film critique (and to a smaller degree, message-board heathens) bewilders nearly every single interviewee, and Addis does nothing to separate the passionate writers from the fly-by-night, unholy bloggers who blot the field of film writing.

Presenting a lush understanding of criticism isn’t what “Heckler” is about. The picture cherry-picks ideas and statements, some extremely insightful (Arsenio Hall, Bill Maher), to give the viewer a superficial snapshot of writers who love to administer low-blows to their targets. Addis makes a crucial point of mean-spiritedness (an unfortunate truth), but he doesn’t nail Kennedy to the wall for his cinematic sins to provide an understanding of why the reviews are so harsh. Anyone who sat through “Son of the Mask” has every right to disparage Kennedy for his comatose performance, and it comes across as childish to watch the actor sulk through the documentary as though he’s owed an explanation for his bad notices. Couple the attitude with a series of staged sequences of comical confusion and depression, and “Heckler” falls completely off target.

Is the film a shrewd document of inopportune professional derision or a goofy revenge piece from a bullied actor? The tone never gels. However, the case for a proper vengeful beat-down is put forth by footage from a 2006 boxing event where the noted conductor of awful Uwe Boll took time out of his busy day directing seven movies simultaneously to pummel the tar out of underweight, pasty online film critics of dubious notoriety. Now there’s some fun.

The Dolby Digital 2.0 mix maintains an even tone. Nightclub atmospherics and soundtrack cuts are offered a full-bodied recreation, but the majority of the sonic experience is reserved for the interviews, which are presented crisply, with the exception of Eli Roth, who looks and sounds as though he was recorded in a strip-mall karaoke booth.

It should be noted that the “Heckler” DVD package art is plastered with positive quotes from film critics. Hypocrisy? You. Make. The. Call.

A feature-length audio commentary with star Jamie Kennedy and director Michael Addis is a jokey affair, though I have to hand it to Kennedy for keeping the track on task.

- Most of the film was shot on the fly, with Addis tagging along with Kennedy as he toured the country with his stand-up.

- A large portion of the fun in the commentary comes from the filmmakers recalling how they nailed down the celebrities for interviews.

- Kennedy can pull off one terrific Henry Winkler impression.

- Kennedy insinuates that Kenny Baker (best known as R2-D2) is a drunk and assumes he’s dead. Baker is quite alive.

- Addis insinuates that the Uwe Boll boxing match was “heightened” by fake blood packs. Kennedy is quick to stifle any further information about the nutty boxing face off.

Overall, the commentary is non-stop, which is wonderful. It’s difficult to agree with what Addis and Kennedy are often thinking, but the boys keep the conversation rolling, even when they seem as though they have no clue what they want their movie to ultimately say about heckling.

“Deleted Scenes” (28 minutes) present some face time with Kennedy’s opening act Al Berman, details a Bob Saget phone call made onstage, shows the displeasure of Kennedy’s assistant to his boss’s new jokes, introduces the “comedy chiropractor” to the world, visits a heated green room brainstorm session with other comics, chats with giggly girls from Kenosha, and reveals a lost story from Fred Willard. One of these scenes is dynamite and should’ve been included in the final film. Try to guess which one.

Eventually, “Heckler” assumes the role of therapist, showcasing a collection of actors who carry with them emotional wounds from their vicious press. I sympathize with Kennedy and the group (including Carrot Top, Carrie Fisher, and Harland Williams), and perhaps I will be more mindful of those I so callously (yet often deservedly) roast with my poisoned pen (or keyboard). However, “Heckler” doesn’t penetrate like a proper documentary should; it’s more silly than exploratory, missing a prime opportunity to crack open a dialogue between critic and performer that could generously benefit both parties. Instead the film is a blind swipe at an invented enemy, concluding broadly with Kennedy collecting and quickly lighting all his bad reviews on fire.

Now is that any kind of way to start the healing process, Jamie? 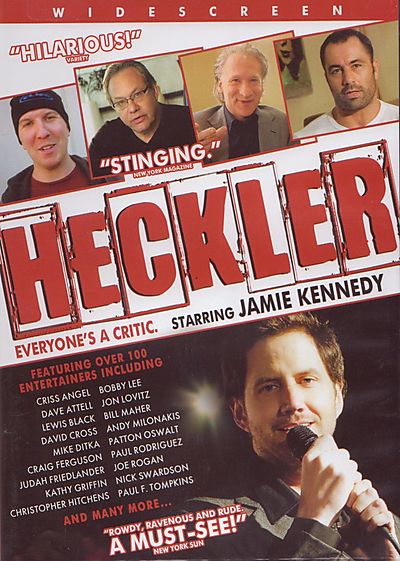 I completely agree with this review. I thought the documentary started out brilliantly, but I was rather annoyed when I learned what it's true intentions were. There is no good excuse for horrible movies like Son of the Mask. The film attempts to justify bad movies by claiming "they were for 13 year old kids who like fart jokes." I don't think that counts as an excuse. Do we really want to dumb kids down at that age by making them think farting is real comedy?

I've just finished watching Heckler and I was happy to find your review of the movie, you've echoed my feelings almost exactly. I'm defintiely a movie fan, but much more so a comedy/ stand up fan. I was very intrigues by the title and the trailer and felt let down after about half an hour. I could literally see the point where this 75 minute movie broke down from the promising concept. I guess this is a movie for people in the business who can't wait to make each other feel better. Anyways, another perfect review.