What Ben Stiller has achieved with “Tropic Thunder” is the cinematic equivalent of witnessing Halley’s Comet: he’s crafted a Hollywood satire about Hollywood, and it’s a triumph on nearly every level of execution and intent. It’s an industry rarity that’s worth applauding.

Off in Southeast Asia to star in the blockbuster war film “Tropic Thunder,” action titan Tugg Speedman (Ben Stiller), comedic mess Jeff “Fats” Portnoy (Jack Black), and method nightmare Kirk Lazarus (Robert Downey Jr.) find the picture a total mess, leaving director Damien Cockburn (Steve Coogan) at wit’s end. After prodding by the writer (Nick Nolte), Cockburn decides to shoot the film with hidden cameras, taking his cast to the deepest parts of the jungle to conjure a sense of reality out of the dying project. Once on the ground, the cast finds the desired authenticity perhaps too intense, stumbling upon a heroin farm staffed with vicious soldiers.

In a delightful twist of imagination, “Thunder” commences with a trio of trailers showcasing the prior, shameful work of the lead characters. It’s an inspired way to reveal to the audience who these characters are without the nagging obligation of exposition-heavy dialogue.

For Speedman, his snowbound action sequel, “Scorcher VI: Global Meltdown,” is the latest attempt to recover his career from an Oscar-bait disaster about a mentally-challenged farm boy, “Simple Jack.” Portnoy is seen embracing multiple flatulent roles in the gross-out celebration, “The Fatties.” And Lazarus portrays a priest tasting forbidden male fruit in the passionate melodrama, “Satan’s Alley.” Right there, in the opening five minutes of the picture, motivations are solidified, personalities are unfurled, and broad satiric targets are nailed with sniper-like precision.

Already something of a comic legend due to his acting accomplishments, Stiller has always achieved more interesting results with his directorial efforts (“Zoolander,” “Reality Bites,” and the unfairly maligned “The Cable Guy”). “Tropic Thunder” is a superb addition to his filmmaking library: it’s a razor-sharp, dumb-as-rocks comedy that eviscerates the Hollywood acting process and all the delicious bits of absurd ego that shadow closely behind. Stiller builds a satire here of runaway film productions (“Thunder” has only shot for five days and is already 100 million over-budget), Hollywood suit harassment, and the behavior of overpaid movie brats faced with real threat. It’s a combustible mix that Stiller meticulously nurses, resulting in a film of non-stop laughs.

Used to recent comedies that habitually “pump the brakes” to stay tight to storytelling formula, it’s a pleasure to report that “Tropic Thunder” is a work of pure hilarity and insanity throughout. Stiller is making a farce here, but a farce that savors time to goof around and play.

Perhaps the best example of tone here is the character of Lazarus, a serious actor of serious movies, who, in an attempt to find the corners of his character’s psyche, underwent a medical operation to change himself from a blue-eyed, blonde-haired Australian to an African-American, topped off with a suspect jive tongue. Downey Jr. executes the role with an exhaustive motor-mouth delivery that’s more helpful in short bursts, but a concept like this is daring in a manner the screen hasn’t seen in a long time, held from outright contempt in the way Stiller keeps the absurdity of the transformation in the forefront of every discussion. Even Lazarus thinks he might’ve gone too far. The character plays to both the ego and the idiocy of actors, performed with impeccable insight and total commitment by Downey Jr.

For more sloppy goodness, Black is brought in for huge laughs. Playing the drug-addicted star of Hollywood’s worst artistic trainwrecks, Portnoy is a mess, accidently putting himself through withdrawal sickness when a bat makes off with his heroin stash. It’s a definite blunt edge in the script, but Black’s portrayal of a sweaty, panicky oaf desperate for a fix in the middle of nowhere uncorks the loudest hoots in the picture.

With a supporting cast that includes Jay Baruchel, Matthew McConaughey, Danny McBride (who’s surprisingly effective as the film’s explosives expert), Bill Hader, and Brandon T. Jackson as rap-star-turned-actor Alpa Chino, “Thunder” is refreshingly game and quite capable of going anywhere for a joke. Thankfully, it often does, observing Speedman and the clueless actors trying to navigate a jungle of exotic hazards, or drum up bizarre plans to battle the heroin crime lords when push finally comes to shove.

There’s a swarm of surprises in “Tropic Thunder” I can’t reveal here, but rest assured, the price of a ticket buys your way into Stiller’s active imagination and it’s a pleasure to witness just where the maniac premise takes the characters and the audience. “Tropic Thunder” is a cannonball of laughs and comedic discovery. 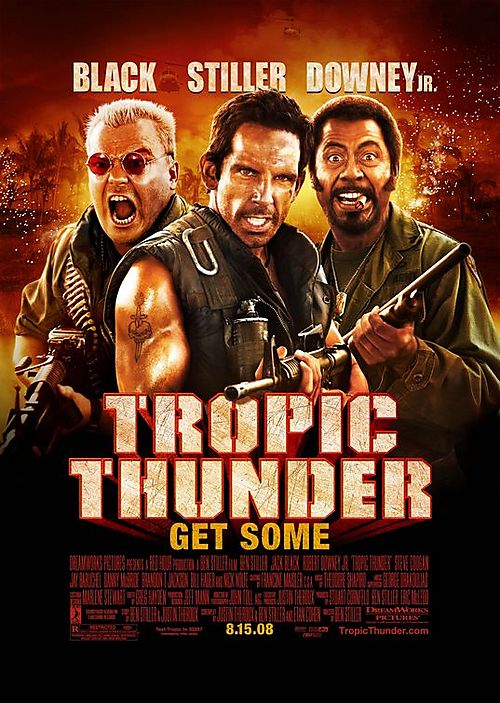