It’s been a long time since the conceit of a train odyssey was used to backdrop a psychological thriller. Typically associated with cutting Hitchcockian overtones, filmmaker Brad Anderson looks to return a touch of discomfort back into the genre with “Transsiberian,” a glacial but easily consumed thriller played out in mysterious, remorseless locations.

An American couple trying to patch up marital differences with a railroad trip across Russia, Roy (Woody Harrelson) and Jesse (Emily Mortimer) hope the travel will ease their communication predicament. On the train, they meet a younger couple, Carlos (Eduardo Noriega) and Abby (Kate Mara), and immediately try to play gracious tourists, befriending the newcomers, who are charming, but well-versed in illegal activities. When Grinko (Ben Kingsley), a Russian drug enforcement officer, boards the train, he sniffs trouble around Jesse, turning his attention to the skittish woman as he hunts for smugglers, leaving the couple at the mercy of the Russian police.

For the bulk of his career, Brad Anderson has made quite an impressive effort to swat away expectations. He’s a genre-hopper, trying on new cinematic pants through every effort, with his last production, 2004’s “The Machinist,” presenting his most insular, bleak movie to date. Perhaps desiring to shake off the method nightmare of “that emaciated Christian Bale flick,” Anderson stakes out a place of more welcoming adventure in “Transsiberian.”

While still composed with Anderson’s penchant for deliberate pacing and threatening mood, this train mystery is a much more accessible event, playing on established fears of traveling in desolate foreign countries, the temptations of infidelity, and the troublesome insistence of strangers. Anderson works the knobs of the screenplay gently, building trust with the audience by establishing firm characterization and an apprehensive tone, where Jesse breaks away from Roy’s hospitality to become the focal point for Carlos’s unseemly advances. The sexual restlessness presents an intriguing conflict to the story and it’s paid off well, thoughtfully performed by Mortimer and Noriega.

Once Grinko boards the train, “Transsiberian” downshifts into recognizable paces, turning up the heat of interrogation, but also transforming the Americans into crafty action stars, leaping around the train as the trail of guilt leads right to them. It’s certainly entertaining to see Harrelson beat the sniveling “but we’re Americans!” drum, however the final act heroics fail to match the early suspense. Kingsley layering on the Vodka-fragrant Russian accent doesn’t help matter much either.

It takes its sweet time, but “Transsiberian” is a frosty, gripping ride on the terror train. It maintains the generous beat, giving audiences a nice jolt of xenophobia to go with their helping of traditional thrills. The picture also communicates Brad Anderson’s skill with tension and geography evocation, showcasing the alluring naturalistic beauty of Russia while selling a nightmarish story that will assuredly dissuade tourism. That type of contradiction is hard to pass up. 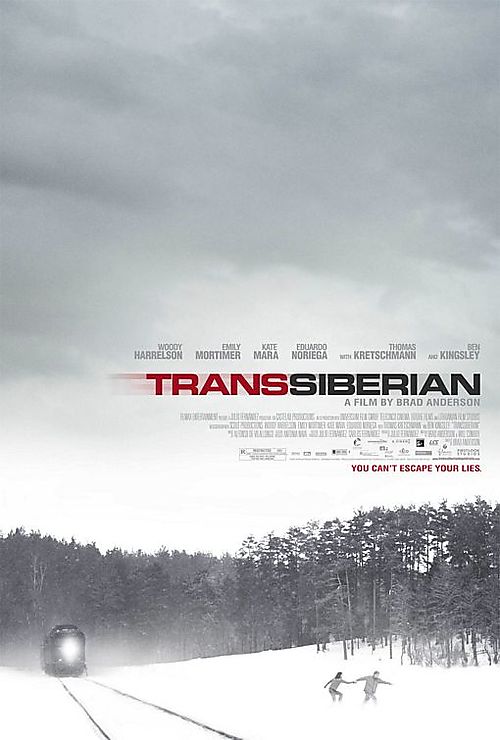