We can thank Jason Bourne for making the multiplex a safe haven for men who dabble in the practices of both good and evil. Without Bourne, there would never be a film like “Traitor,” a snappy global terrorism thriller that faithfully dissects the exquisite torture of the clouded conscience.

Arrested in Yemen on terrorism conspiracy charges, Samir (Don Cheadle) is befriended by Omar (Said Taghmaoui) in prison. A dangerous member of a terror cell, Omar brings Samir into the fold, and when the two escape from detention, they join up with a larger radical membership, with plans to strike on U.S. soil using a tightly choreographed suicide bombing campaign. On the other side of the law sits F.B.I agent Roy Clayton (Guy Pearce), a dedicated tracker who finds Samir’s actions ruthless yet puzzling. Digging deeper into the terrorist’s background, Clayton finds Samir’s motives to be vague, traveling all over the world to catch him and discover just what is motivating his unusual acts of violence.

I supposed the valuable lesson to be gleamed from the “Traitor” experience is that there’s still some excitement to be scooped up from a terrorism thriller. A fatigued topic in today’s cinema landscape, “Traitor” steps away from obvious passageways of geopolitical provocation to survey the instability of those who choose to participate in violence, either in the name of God or their home country. The feature finds a wellspring of inspiration taking the unexpected path, and “Traitor” is often as thought-provoking as it is exhilarating.

Keeping away from media-fed soapbox moments of heroism and villainy, the screenplay (with a story credit going to Steve Martin) pays consideration to the individuals who endure the system of death and dishonor on a daily basis. The focus here is Samir, a devout American Muslim who finds himself entrenched in the Middle East for reasons the film doesn’t make immediately known. He’s a loving, caring fellow with a conscience rooted in his beliefs, yet faced with a world that’s spun out of control, bastardizing the Muslim faith to a point of unavoidable retaliation. Cheadle’s interpretation of Samir’s pain and exhaustion is whole-heartedly felt through the smallest of nuances. It’s a majestic performance of internal crisis, creating an unforgettable character arc of discipline and despair for Samir, who has lost his prized sense of soul to take a shot at salvaging the world. Cheadle has rarely, if ever, been better.

Directed by Jeffrey Nachmanoff, “Traitor” is amazingly light on its toes, erecting a maze of captivating intrigue and sprinkling around a few effective, plot-smashing twists to underscore the unexpectedly charged emotional content. “Traitor” is, after all, intended to get the heart pumping, and Nachmanoff accomplishes the challenge with a few chase sequences and an overall throb of forbidding terrorist threat. The only real piece that’s missing is the ying and yang relationship between Samir and Clayton. The screenplay seems to be reaching for an unsettled, profound connection between the cat and mouse, but the finished film never quite achieves the desired union. More compelling is Samir’s tentative relationship with Omar, which soon assumes brotherhood status, thickening the quagmire for Samir, pushing him to a breaking point.

“Traitor” is smart and confidently assembled; it packs a satisfying punch, especially to those who come to the movie cold. It may dip a toe or two in the waters of previous international conspiracy thrillers, but it works the genre with tremendous spirit and a robust sense of humanity, eschewing standard action honors to observe the actual consequence of death. 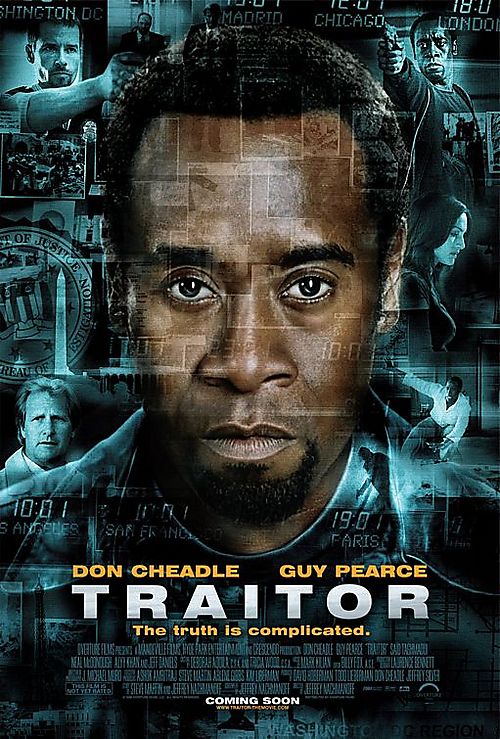