A pox, a pox I say, on the house of the individual who first told Rainn Wilson he was a funny man. For the inconsiderate moose that decided to open their trap and inspire this actor, I wish them the same discomfort I suffered while watching Wilson’s first starring effort, “The Rocker.”

Enjoying the rising success of his ‘80’s metal band Vesuvius, drummer Robert “Fish” Fishman (Rainn Wilson) is floored when the band mates (including Fred Armisen, Bradley Cooper, and Will Arnett) fire him. Now 20 years later, Fish is stuck in a series of soul-sucking jobs, living in his sister’s attic. When his nephew Matt (Jack Black photocopy Josh Cad, “21”) asks Fish to join his band A.D.D. (including Teddy Geiger and the gifted Emma Stone) for a few gigs, the lonely drummer agrees, turning the garage nobodies into chart-topping YouTube stars when footage of his nude rehearsals leaks. Asked to tour, A.D.D. hits the road, offering Fish the rock star lifestyle he’s craved for decades, but can his aged, doughy body take the pressures of fame? Will mom Amanda (Christina Applegate, on autopilot) allow Fish to corrupt the band?

Do you really care?

“Rocker” is a mundane comedy, made to be discovered on cable television, where the convention of crotch hits, vomit jokes, nude Rainn Wilson, and storytelling clichés can be absorbed without the pressures of ticket and concession pricing. It’s a terrible film and I didn’t giggle at all while watching it, but I can see its potential appeal with a distracted home audience who has the option of burning through a checklist of domestic tasks while the picture drones on in the distant background. Gosh, I envy those people.

Unfortunately, I had to sit through “Rocker” as it assembled a laundry list of uninspired humor, often falling back on slapstick 101 nuggets to get a response out of the audience. Anemically directed by Peter Cattaneo (“The Full Monty”), “Rocker” tries to squeeze as much comedic mileage out of Wilson as it can, depending on the actor to stand proudly in front of the camera and mug shamelessly to sniff out any hint of a chuckle. Wilson is enormously grueling to watch here, bouncing around the frame while his co-stars wait their turn for lines. “Rocker” is more of a fall-down-and-go-boom comedy than an inspired send up of rock star rites of passage or hair metal traditions, and that feels like such a waste; especially with cock rock goon Brett Michaels back in the public eye. Surely there’s more potential substance to the film than Wilson getting hit in the face with branches, strolling around shirtless (a Will Ferrell staple), falling over his drum kit, or keeping some “lucky puke” in his front pocket?

With a comedy cast that includes Wilson, Arnett, Cooper, and Cad, there’s already a multiplex version of a Mr. Yuk sticker slapped on this baby. Take the hint. 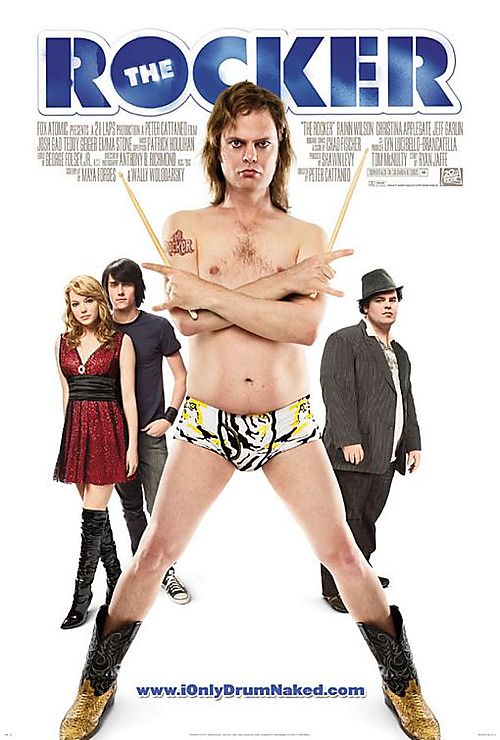