Perhaps the most brilliant decision the producers of “The Longshots” made was to hold director Fred Durst’s credit from reveal until the end of the film, to minimize assured slack-jawed disbelief. The guy who gifted the world “Nookie” is making movies these days, and much like the music he created with band Limp Bizkit, Durst’s cinematic sensibilities are hackneyed, tiresome, and lack sorely needed rehearsal.

In the depressed Midwestern town of Minden, young Jasmine (Keke Palmer, “Akeelah and the Bee”) is having difficulty fitting in at school, hounded by the popular kids and struggling with the absence of her biological father. To help out, Jasmine’s shiftless Uncle Curtis (Ice Cube) is brought in, and while bored with the young girl’s fascination with fashion, he spots a terrific throwing arm underneath all her melancholy. Encouraging Jasmine to perfect her football skills, Curtis gets her on the local Pop Warner team, where she’s met with immediate disapproval. However, once her arm starts producing wins, Jasmine finds herself a success, and provides Minden a new, long overdue shot of hope.

Actually, “Longshots” is Durst’s second directorial endeavor (the first, “The Education of Charlie Banks,” has been unable to find distribution), but one could never deduce that little detail while watching this inspirational football film. “Longshots” is a bowlful of clichés, never once straying from the path of screenwriting basics, scrubbed down to the barest tension and invention to appeal to a mass audience.

The uplifting sport melodrama formula is all well and good (this review is brought to you by the world’s biggest “Rudy” fan), but Durst isn’t the type of confident filmmaker to start experimenting with tone or performance. The film is a work of survival; a directing effort played safe to assure future directing efforts, and while it offers audiences a relaxed experience, it does nothing to show off what Durst is capable of behind the camera. Or maybe this is all he’s got.

Rooted loosely in fact, the story of Jasmine Plummer is a sweet account of gender subversion and community spirit. Durst imagines Minden as the archetypal lost cause: the factories have been shuttered, church attendance is down, and beer sipped from a brown paper bag is the unofficial town drink. Shot with autumnal gloom, Minden is ready for a bright focal point when Jasmine rises to fame, and the screenplay slathers on the motivating speeches and melodramatic setbacks (heart-attacks, a Tyrone Biggums caricature of absentee fatherhood, lack of football funds) with apathetic writing-template timing. It’s difficult not to be consumed with cynicism watching Durst sleepwalk through the motions here.

The football sequences also offer a recognizable buffet of hazing sequences and underdog scenarios. While impressively scored by John Swihart, “Longshots” is again smothered by manufactured sentiment and conflict on the gridiron, though many of the scenes are saved by Cube and Palmer. Sharing friendly, endearing chemistry, the actors rescue the picture with their easygoing charisma, especially Cube, who isn’t Olivier, but reveals a vulnerable, gentle side to his gruff persona. He’s fun to watch, and the sporting sequences benefit from the comedic interplay between the actors.

Aimed primarily at children, “Longshots” works best on a carefree mind, otherwise the tsunami of formula will surely sweep away any enjoyment factor. Fred Durst is hardly the ideal creative soul to shine new light on a well-worn inspirational plot, routinely declining to challenge mounting cliché to better the final product. 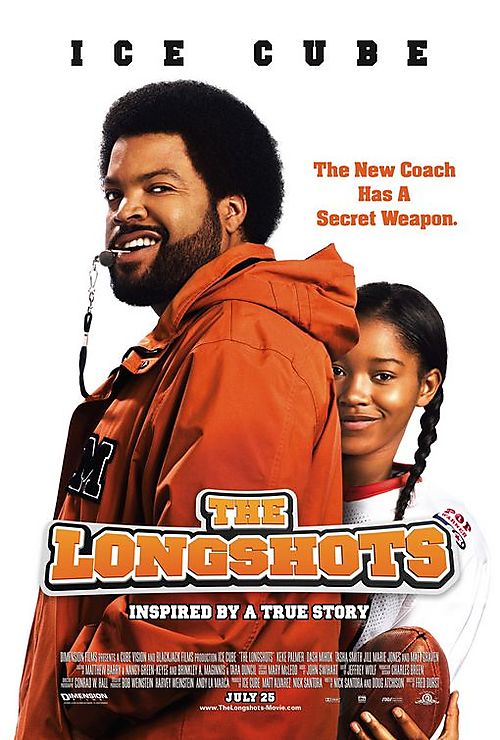