Not only is Anna Faris one of the more brightly gifted comediennes working today, she’s some sort of miracle worker. How else can one explain the ability to sit through something that emerged from Fred Wolf and not have the urge to run screaming from the theater? That Anna Faris is amazing.

Turing 27, Shelley (Anna Faris) is awaiting her turn to be a centerfold for Playboy while enjoying the Mansion lifestyle under Hugh Hefner’s (in a funny cameo) care. When a rival (Monet Mazur) pushes her out of the running, Shelley turns to the dilapidated sorority Zeta Alpha Zeta for shelter. Assuming the role of their house mother, Shelley takes her drab charges (including Emma Stone, Kat Dennings, Katharine McPhee, and Rumer Willis) and turns them into knockouts, making the sorority the hottest on campus. Feeling comforted by her work, Shelley soon learns the troubles that come with masking true identity.

A noted “Saturday Night Live” comedy wizard, Fred Wolf is also highly recognized for dreadful Hollywood screenplays (“Joe Dirt,” “Black Sheep,” “Dickie Roberts”), perhaps losing his ear for cleverness when it has to stretch inside a three-act structure. Wolf moved up to directing with this year’s wretched “Strange Wilderness,” hinting that the big screen just might not suit his gifts. “The House Bunny” repairs some of his damaged reputation, but that’s only because Anna Faris is there to bail out his pedestrian moviemaking skills.

Faris is such a wide-eyed wonder of giggles that it seems unfair to watch as she’s paired up with movies that don’t fully comprehend what to do with her. “House Bunny” isn’t her first starring role, but it represents a critical step to longstanding fame, and she aces the character like a total champ. Clad in little more than high heels and a smile, it’s an atypical role for the actress, now asked to balance out her natural bubbles with a candied sexuality, to better match the platinum-blonde build of the aspiring Playboy starlet. Faris is rarity in the industry: a legitimately hilarious performer with a virtuoso sense of timing and screwball articulation. Faris refuses to make Shelley the joke of “Bunny,” only its clueless ambassador, stumbling through a wonderfully oddball courtship with an idealist (Colin Hanks) during her time turning geeks into goddesses.

In fact, “House Bunny” is generously cast all around, with nice contributions from Dennings, McPhee, Willis, and Stone, who should find a straight-up buddy comedy project with Faris soon. They work beautifully together. Wolf is smart just to let his cameras run while the actresses do all the heavy lifting through the quirky performances, for once the story returns, the film stops cold.

A “Revenge of the Nerds” fable for social outcasts everywhere, “Bunny” is lacking a needed boost of originality in the structure, lamely running through a contrived routine of setbacks and self-actualization moments. The feature dies when attempting to uncover an arc for Shelley and the gang, frequently losing the comedic momentum. As revealed in his feeble writing endeavors, Wolf is terrified to stray from a rigid storytelling template, and his films suffer without a needed gasp of artistic oxygen.

Tune into “House Bunny” to appreciate Faris and the film will certainly please. I’m hopeful comedies like this will lead to bigger and brighter career turns for the talented actress, but I would also be pretty thrilled to see her continue the bubblegum ditz routine she so flawlessly executes. 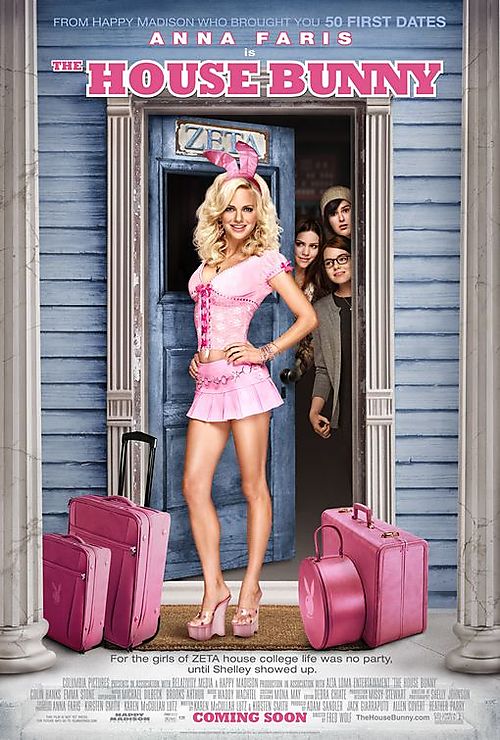