Watching Steve Coogan overact is like being pummeled bloody with a pillowcase packed tightly with frozen oranges. When he’s given carte blanche to eat up the frame, Coogan can be aggravating to behold, and “Hamlet 2” is always eager to let the British comic set the tone. It results in a thoroughly disheartening farce that doesn’t believe a joke is funny until it’s been indicated into fine dust.

A former actor stuck in Tucson, Arizona teaching high school drama, Dana Marschz (Steve Coogan) wouldn’t know theatrical quality if it came up and bit him on the nose. To save the drama department from school budget cuts, Dana decides to write his own play, the time-traveling musical “Hamlet 2,” and fill it with his every hope and button-pushing desire. Now armed with the enthusiasm of his class of hooligans, Dana attempts to take the play to opening night, only to find school officials, parents, and Tucson itself deeply troubled by the content, threatening to shut down the play and crush Dana’s delusional world.

“Hamlet 2” is an exercise in irreverence, but the sarcastic delights are portioned out with a cannon, not a fine-edged knife of legitimate wit. It’s a constantly somersaulting movie, playing as broadly as possible with topics as softball as can be, yet the whole shebang retains a repulsive exclusionary air about it, as though this steaming helping of stupid is somehow the most potent evisceration of anti-establishment behavior to date. I wouldn’t give writers Andrew Fleming (who also directs) and Pam Brady that much credit.

“Hamlet 2” didn’t make me laugh; a concept I can deal with. What’s far more sinister about this lousy comedy is how hard it pushes on the senses, tipping sacred cows like doofy frat pledges just to get a rise out of the audience. The assault is led by Coogan, who resembles a mime on fire in this shrill performance. Barely swallowing his accent and leaping about as though the entire film depended on his charisma to survive, Coogan presents his most embarrassing and ineffective work to date.

He’s shameless here, selling Dana’s endless foibles with a steamroller of loathsome screen behavior, turning the film into a miserable Monty Python sketch that suggests no end in sight. I’m not sure why Coogan felt the need to underline every single joke with his wildly-gesticulating performance of extreme clowning, but it positively murders the film’s insipid stabs at cleverness, reducing every scene to a concentrated display of oafish jester overkill. I’ve seen worse movies than “Hamlet 2” this year, but not performances.

The foundation of “Hamlet 2” is paved with juvenile shock value, which passes for wit in the crayola screenplay. It’s an irksome compilation of comedic stereotypes (get this: one of the drama kids is gay!), conventional pokes at religion (the play’s centerpiece is the musical number “Rock Me Sexy Jesus”), and random fits of male nudity to smack the audience awake. When that fails Fleming, he quickly orders one of the cast to be thrown into a wall or have something tossed at their head to save the scene. If that stumps Fleming, then he trots out Elizabeth Shue, here playing herself as the object of Dana’s golden Hollywood lust. It’s a weird slice of pointless absurdity that isn’t nearly as funny as it sounds, and it doesn’t even sound funny.

“Hamlet 2” sends up high school drama department politics, the inflated ego of actors, overzealous ACLU lawyers (Amy Poehler, in a rare dud performance), budget stage theatrics, and treasures the quest to get the hell out of Tucson. It’s a cornucopia of wheezing jokes, garish presentation, and mind-numbing acting transparency, furiously balled into a soggy, unpleasant whole. It’s not enough that “Hamlet 2” is a comedic misfire, it’s a featherweight satire as well, dissecting obvious targets with obvious tools. I think a time-traveling Jesus, roller-skating pratfalls, and unpardonable gag lifts from “Rushmore” deserve a better vehicle than this Sundance-approved (of course) fiasco. 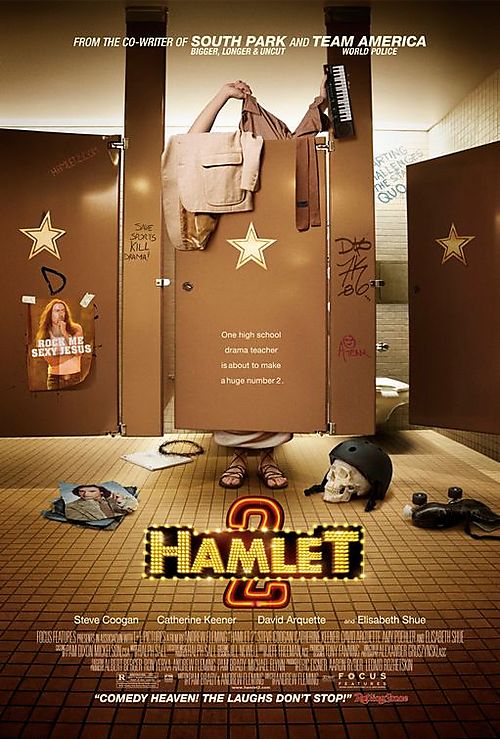 Wow, harsh review for the Sundance favorite. Hey Brian there's another movie about the theater you'd probably like better, Never Say Macbeth. It's more witty than Hamlet 2. It comes out on DVD August 26th.

What an accurate review. I'm a moron who needs to get out and see the world. Thanks for helping me do that.