Film Review: Fly Me to the Moon 3-D

Didn’t we just do this with the chimps? “Fly Me to the Moon” takes budget CG animation back into the vastness of space, only now the subjects are tiny, the visual depth enormous, and the objective much more educational. The entertainment value? Debatable.

Three young flies, dreamer Nat, gifted I.Q., and pudgy Scooter, are hungry for adventure, but afraid to step outsides the boundaries of their lives. When NASA plans to launch the Apollo 11 mission, the flies slip out in the middle of the night and sneak into the ship. Launched to the moon, the pals achieve their dream, much to the concern of their respective parents (voiced by Kelly Ripa and Adrienne Barbeau), and the delight of Nat’s grandfather McFly (Christopher Lloyd). While peaceful stowaways, the flies are compelled to help when the mission runs into mechanical and Soviet trouble.

The producers claim that “Fly Me to the Moon” is the very first CG-animated film built entirely and exclusively for 3-D presentation. The endeavor is impressive as the movie actually makes time to show off the enhanced visual thumbprint with extended takes of insect flight or reverent shots of the space mission, gladly displaying detail to help deepen the 3-D aesthetic. While money was clearly in short supply for the “Moon” production, the screen reveals genuine effort from the animators and director Ben Stassen (a 3-D vet), who successfully impart a fleeting sense of awe in the film.

The rest of “Moon” didn’t grab me with its familiar routines of potty humor and uplifting messages on reaching for the stars. “Moon” feels halfhearted in the story department, suffering from too much filler to meet something near a 90-minute running time. The second act introduces some commie flies into the mix (led by “Poopchev”), suggesting the writers had little left in their creative gas tank, disturbing this once peaceful film, which now has to balance a worshipful tone with the space sequences and the slapstick provided by humorless Russian bugs.

“Moon” is routine but there are flashes of invention, spied in the 1969 setting and the hilarious, straight-faced epilogue, which wheels out astronaut Buzz Aldrin to remind families that the film is pure fiction, and the space program would never allow “contaminates” onboard one of their ships. It’s nearly worth the price of admission to see this surreal nugget.

“Fly Me to the Moon” isn’t offensively bad, just anemic and uselessly trendy. It’s strictly a diversion for kids, and while it’s hard to recommend it on purely creative merit, I suppose it would be a wonderful thing if these silly flies ended up pushing kids to investigate space travel and the legacy of NASA. Unlikely, but it’s more comforting than fart and burp jokes. 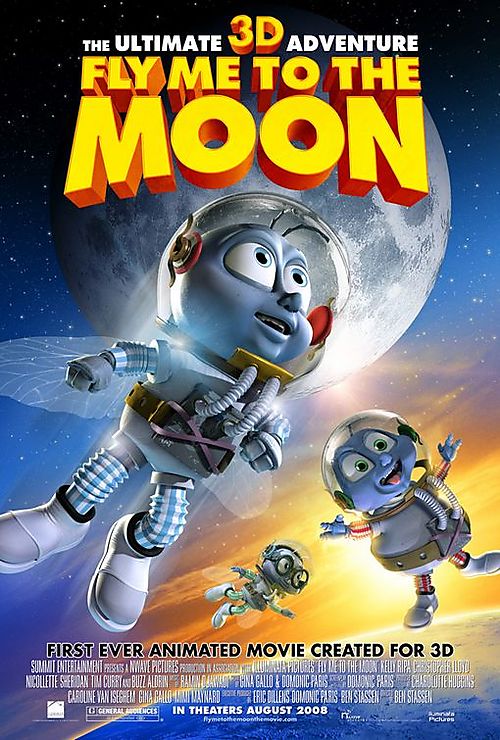