After “Date Movie,” “Epic Movie,” and January’s “Meet the Spartans,” writer/directors Jason Friedberg and Aaron Seltzer have willingly positioned themselves as artistic pariahs. They abuse the art of parody to craft wickedly loathsome pop culture spoofs, forging actual effort to razz their subjects, only reiterating absurdity. And man oh man, do teenagers ever flock to these vile, willfully unfunny concoctions. But how can you blame them? I’m sure a night ignoring the screen to text-message friends and giggle at fart jokes is far more appealing than Scrabble with mom and dad.

For their latest romp, the doofy duo have been stripped of the 20th Century Fox home, lurching over to Lionsgate, because, let’s be honest here, the studio that gifted the world “Saw” and Tyler Perry isn’t all that concerned with churning out quality product. So, it’s a new beginning for Seltzer and Friedman; a chance to transform their low-budget, throwaway cinema habits and attempt to give birth to something that enriches the human experience, or, at the very least, demonstrates that these guys might have a ounce of artistic aptitude to go with their enormous bank accounts. I mean, come on! It couldn’t get any worse, right?

Shoved through a blitzkrieg production process over the last few months, “Disaster Movie” intends to capitalize on the late-summer moviegoing blues. With audiences up to their eyeballs in overblown blockbusters, Friedberg and Seltzer have arrived to send-up the obvious, taking potshots at popular movies, singers, and actors, arranging the nonsense in a short (75 minutes) burst of idiocy and borderline-illiterate filmmaking. I’m not sure if “Disaster” is the worst movie the boys have churned out, but, at this point, that’s like asking if a bullet hurts more than a knife. At this stage of the game, excellence isn’t a concern for these scoundrels, just continued delivery of contemptible humor.

The targets for “Disaster” hold little surprise: “Indiana Jones and the Kingdom of the Crystal Skull,” “Sex and the City,” “Juno” (I thought that was already a lampoon), “Step Up 2 the Streets,” “Enchanted,” “Twister” (yeah, take that 1996!), “Beowulf,” “Speed Racer,” “The Love Guru,” “Hellboy II,”  “Hancock,” and “Get Smart.” If you’ve seen the other installments of this gratuitous franchise, you already know the delivery process: make a joke, explain the joke to the audience through close-ups and ADR clarification, and then kick a character in the balls. The filmmakers cling to that simplicity for dear life, assembling a horrifically slapdash production that looks as though it was filmed inside a vacated condo and around their neighbor’s backyard.

Actually, the only fascinating element of “Disaster Movie” is watching how much Friedberg and Seltzer avoid paying for production value. The picture looks enormously amateurish, and the ocular offense extends to the cartoon send-ups, where the cracked-out “Alvin and the Chipmunks” are turned into dime-store hand puppets and “Kung Fu Panda” is represented with a Disneyesque costumed character. Huh? There’s also a discernable allergy to special effects, leaving inert takes on “Night at the Museum” and “10,000 B.C.” a little bizarre and conceptually embarrassing.

Complaining about visual gloss is perhaps a wee bit silly on my part. There’s just so much more to loathe here than the evident lack of coin. For example: there’s an extended take on the branding whoredom of Miley Cyrus, a bit where the film paints Jessica Simpson as a moron (zing!), various smutty music numbers brought to the screen through “High School Musical” and “Enchanted” riffs, and a well-stocked buffet of fecal-based humor. Add to the mix a miserable cast made up of complete unknowns, don’t-want-to-knowns (Vanessa Minnillo, Tad Hilgenbrink), and a good chunk of “MADtv” castaways (yes, that show still airs) in multiple roles. Oh, how they mug.

In short: when Carmen Electra and Kim Kardashian are the thespian highlights of your movie, it’s time to start reading a filmmaking manual of some sort. 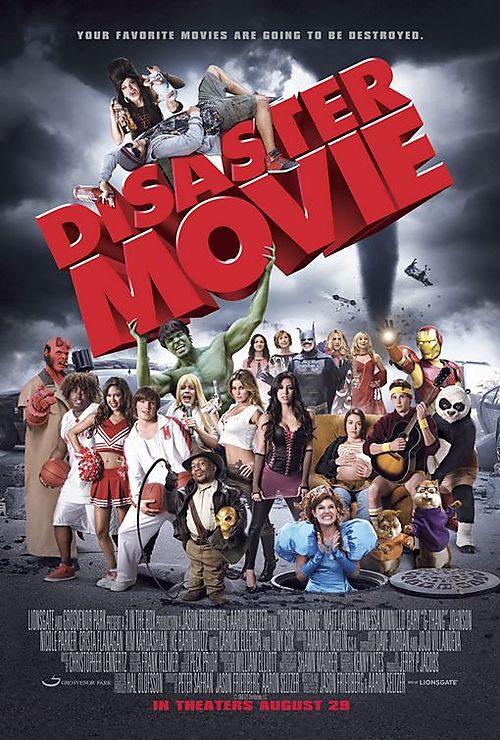 Actually, the MadTV stars here can be funny. Nicole Parker slayed as Ashlee Simpson during her early run on the show, but for reasons only the producers can tell me, it was put to bed (I haven't watched the show lately, but did they actually lampoon Ashlee when her new album came out). Now all she's doing is rehashing sketches with Britney Spears and Ellen DeGeneres.

Same goes for Crista Flannigan, who I thought had potential, but is going down the shitter. Honestly, my heart couldn't be any more shattered considering the talent wasted.

Back to Disaster Movie. I'm surprised Seltzer and Friedman are still working. Aside from the Hulk spoof where they got a big guy (the new T-800, Roland Kickinger) to play the Hulk, the rest is tired Hannah Montana horseshit (how hard can it be to spoof this bitch - sorry, Miley fans, but I put a bullet to my head hearing her shit).

I'm curious: in what way do teenagers "flock to these movies?" "Date Movie" (the highest grossing of the previous three) earned just under $50 million and had a production budget of roughly $20 million. A profit of $30 million is hardly what I would call a hit, especially considering that most of its gross came from the opening weekend. That they earn so little suggests the opposite of what you said--once the terrible word-of-mouth hits, they sink like a stone.

Nicole Parker and Crista Flanagan are actually great on MADtv. When I saw the trailer for this and they were in it, I threw up a little bit. Seriously, they should know better (paychecks are tempting though). Oh well, I'm waiting for Scary Movie 5. At least the Scary Movies make me laugh :).

Actually, I think this is the best movie so far in the Freidberg-Seltzer ouevre (smirk).
Well, it's at least as good as "Date Movie" anyway, and a lot better than "Epic Movie" or "Meet the Spartans".

Just as "Date Movie" benefited from having the likable Alyson Hannigan in the lead role, "Disaster Movie" has Nicole Parker and Crista Flanagan, who bring a lot of their sketch comedy experience from Mad Tv to this movie.

Parker had only brief little cameo roles in MTS, but here she is on screen a lot as Gisele the Enchanted Princess, and she is hilarious. And Flanagan is simply too talented for this movie, period. She's the only one who attempts to act at all here. As the Juno character, she does a great job of mimicking Ellen Page's speech patterns and mannerisms from that movie.

The movie's not great, or even good, but I laughed a few times, which is more than I can say of their other movies.

There's something really comforting about knowing that the worst looking movie trailer of the year is in fact one of the worst movies of the year. I still don't understand how you can actually sit through the full length version...I get totally disgusted after about 30 seconds of trailer...

I'm going to personally stand outside a theater screening this movie and Falcon Punch everyone that walks in to see it.

these guys are the uwe boll of comedy... except that uwe's comedy "postal" has a higher rating than this movie.

thats right guys. you're so terrible that you're worse than uwe boll doing a genre he's not even used to. well done. ::clap clap clap::

Oh, and for the record, I havent seen any of the "____ movie"s. because you can tell how god awful they are.

i get mad just thinking about how little money i have and how much these no-talent losers have. I'm going to go play gears of war to vent some frustration...

They are a disgrace to movie making.

QUOTE:
"Parker had only brief little cameo roles in MTS, but here she is on screen a lot as Gisele the Enchanted Princess, and she is hilarious. And Flanagan is simply too talented for this movie, period. She's the only one who attempts to act at all here. As the Juno character, she does a great job of mimicking Ellen Page's speech patterns and mannerisms from that movie."

I just watched it and I thought it was HI-LARIOUS Nicole Parker, I thought was absoilutely amazing in this movie as Giselle, and the main reason in which I stumbled upon this thread was because I enjoyed her acting and singing and mockery so much I HAD to google the movie and give her my thumbs up! I really have grown to love and respect her as a comedian and as an actress as well!