While I won’t pray at the altar of the 1975 cult film “Death Race 2000,” I definitely enjoyed its satiric spit-take on outrageous violence and media-fed bloodlust. It was an innovative and enormously entertaining exploitation picture, blessed with a brain to compliment the body count. The remake takes everything that was imaginative about the original feature and reduces it to an ear-splitting energy drink commercial, topped off with some of the worst filmmaking decisions to be found at the multiplex this year. Yes, that’s right: Hollywood has allowed Paul W.S. Anderson to make another movie.

Framed for the murder of his wife, former race pro Jensen Ames (Jason Statham) is sent to prison, where corporate overlord Hennessey (Joan Allen, in full boat-payment mode) is waiting for him. Forced to partake in the brutal “Death Race” sporting event, Jensen must don the mask of deceased champion Frankenstein (David Carradine, in a voice cameo) and combat his fellow inmates on a private roadway. Armed to the teeth with weapons and defensive gadgets, Jensen, his pit crew (including Ian McShane and Frederick Koehler, Chip from “Kate & Allie”), and his navigator (Natalie Martinez) battle to stay alive as Hennessey unleashes the full wrath of her prized track, provoking the other racers (including Tyrese Gibson) to go after Jensen/Frankenstein to secure their freedom.

Of course, when dealing with a remake (or “reimagining”), there’s bound to be a certain level of disappointment with the upgraded results. However, the new “Death Race” is a sickening reflection of today’s wretched filmmaking standards, eschewing robust satiric drive for a brain-dead romp around mortifying base sensibilities. Anderson is awfully good at shaping crud (“Aliens vs. Predator,” “Mortal Kombat”), but “Death Race” is his Mona Lisa as far as I’m concerned. It’s an outrageously irritating, mouthbreathing spectacle, dripping with loathsome, pandering machismo, which often clouds the most basic filmmaking functions one would think Anderson could’ve mastered by now.

The updating is immediate: the year is now 2012, and the dystopian world is ruled by corporations. The public demands blood to mask unemployment and environmental fears, leaving “Death Race” the profitable focal point for the masses. However, if the world is falling to pieces, how does Hennessey find 75 million subscribers willing to shell out $100 a pop to watch the races? Why does Jensen’s crew use VHS tapes to monitor chase mishaps? Why does Jensen, having recently lost his wife and infant child, openly flirt with his navigator? Asking questions of “Death Race” is a waste of time, since Anderson is only fascinated with the bewildering visceral whack of the premise, not the goofy, fascist futureworld conceived in 1975 and promptly dumbed-down for 2008.

This “Death Race” is all about the testosterone. Now the cars are souped-up murder machines with explosive accouterments for every whim, the navigators are all busty model-types to help boost ratings (do you really need assistance to drive around in a circle?), the musical score by Paul Haslinger offers a headbanging mood, the villain of the race is a homosexual (zing!), the trendy camerawork is set on permo-zoom to lazily generate tension, and the event itself is an over-edited (to a nauseous degree), violent jaunt around an island prison backyard, not the cross-country design of the 1975 film. Also missing is the point accumulation contest, racked up when the contestants ran over pedestrians with their automobiles; why Anderson stopped short of that delicious idea is a mystery, considering the rest of the film is a gory, excitedly immoral production.

I guess killing the innocent places last on Anderson’s “to do” list, falling behind such priorities as: “offer plenty heart-stopping displays of unreasonable misogyny,” “destroy art of drama,” and “piss all over Paul Bartel’s grave.”

Visually, “Death Race” is as hackneyed a film as can be. Performance-wise, it’s in REM sleep. It’s playing with fire to put Tyrese Gibson, Joan Allen, and Jason Statham in the same room together, and Anderson often leaves the cast to their own devices, each hamming it up in their own special way. I’m concerned most for Statham, an actor of special growly menace who has apparently made it a personal quest to work almost exclusively with dreadful directors (Uwe Boll, Philip G. Atwell, Hunter Richards, James Wong, Mark Neveldine, and Brian Taylor), digging a hole in his career that appears motivated by the highest bidder. Jensen holds no arc, no chance for Statham to find interesting angles to play. It’s a paycheck film in a career full of wrong moves. A few more clunkers, and it might lead to an E! reality show before you know it.

Again, “Death Race 2000” was a scrappy Roger Corman B-film, not high art. It contained wit to plug the budget holes, fearlessly crossing the line of taste to make a broader statement of delirium. “Death Race” is unbearable tripe from a worthless director; a hack job to rile up the late summer box office blues. It’s a complete affront to the 1975 picture, but, criminally, the target demo of young men and the recently lobotomized won’t notice what they’re missing. 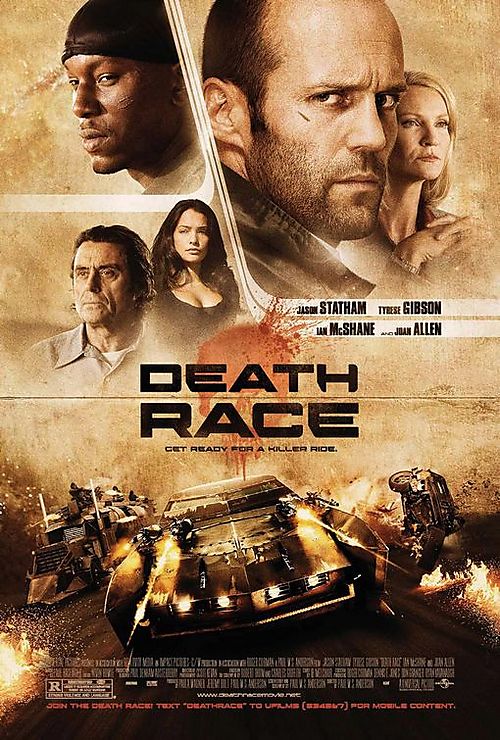