The first and last laudable element of “College” is the spirited opening title sequence. Skillfully mixing high school iconography with contractually-obligated acknowledgments, the opener, designed by director Deb Hagan, is an inventive, bouncy way to start off the picture. From there, the movie falls right into the toilet. Willfully or accidentally is up to the viewer.

Using cartoony campus life to backdrop a larger statement of farcical social release is nothing new to the big screen. It’s a conceptual well Hollywood loves to abuse, averaging one legitimate classic for every 20 stinkers. “College” is, not surprisingly, one of the misfires. Actually, misfire is being too kind. The film is more a waking nightmare of lethargic screenwriting, unbearable performances, and an overall disrespect paid to the fine art of the party movie. It’s a crummy comedy, and it’s no surprise the studio kept it away from early critical view and left it to rot with a late-August opening date.

My discontent with “College” is exhaustively felt in two major areas of the film. The first is Deb Hagan, who snatches a rare directorial opportunity for a woman (an unfortunate truth) and proceeds to submit a motion picture any brute could put together. Perhaps it’s unfair to bring Hagan’s gender into the argument, but honestly, does the world really need another film that celebrates binge drinking, homophobia, appalling improvisational skills, and lousy production value? Lady, there’s enough of that around to last two lifetimes. Hagan lacks the spirit to take the material to another level of encouragement. All she aspires to do with “College” is gross-out the audience with fecal-centric humor and further the careers of actors who have no business being in front of a camera. What a waste.

My second area of distress is the aforementioned acting. There are some sincerely deplorable performances in “College,” even for an easily forgettable, future Spike TV staple like this. Andrew Caldwell is the definitive offender here, contorting himself into a rotund Farleyesque oaf, screaming his lines and furiously trying to “outfunny” his co-stars with his noxious variety of comedic larceny (the Disney Channel seems to breed these guys by the thousands lately). Caldwell is an inexcusable, exasperatingly vile screen presence in a film with considerable competition for such a title.

And don’t get me started on the picture’s dramatic turn in the final reel. Seriously, “College” asks the audience to care about these characters. Where’s Caldwell’s diseased sense of humor when you need him! 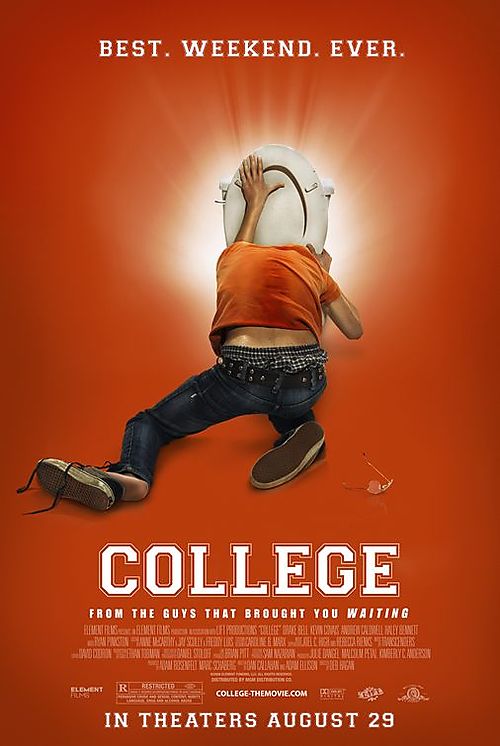 Apparently, "Hannah Montana" is the hottest show that Caldwell's on. But Brian, you are right, all these stars on the damn Disney Channel are irritating: Brenda Song (Brian, Brian, don't tell me you've forgotten about her in your review of "College Road Trip" - was she bad, or did Raven eclipse her?), Miley Cyrus (she's not as bad as Song, but heavens, what mouthbreather finds her songs or act so worthy of praise?), Madison Pettis, and the whole other lot.

Poor Walt Disney should be upset over what is happening to his once towering empire, now featuring a deranged Asian, the most overrated star at the moment, and thousands of assembly-line tykes.