Oh, it’s been a weary road for “Babylon A.D.” Not only has the film been handed a lousy late-August release date, had its original R-rated intent chopped to fit constrictive PG-13 requirements, and touts Vin Diesel as its star, but the director, Mathieu Kassovitz, disowned the movie during a hissy fit interview this past week. Now there’s a picture with some astonishing bad luck. Frankly, it doesn’t deserve such a public meltdown. It’s not a solid feature, but “Babylon” is far from the total disgrace media reports would have us all believe.

Toorop (Vin Diesel) is a mercenary, trying to survive in a future world where violence is a common sight across the increasingly restless globe. Hired by a gangster (Gerard Depardieu, unfortunately dubbed by another actor) to deliver a piece of human cargo from Mongolia to New York City, Toorop is introduced to Aurora (Melanie Thierry) and her handler Rebeka (Michelle Yeoh). Trying to maneuver his way around tightly-guarded borders and curious thugs, Toorop bears witness to Aurora’s distinctive flashes of anxiety and intelligence on several occasions, leading him to question just what in fact he’s escorting to a major city for an organization he’s not familiar with.

Adapted from the French novel “Babylon Babies,” this semi-remake of “Children of Men” (squint and you’ll see the similarities) was purportedly Kassovitz’s dream project before the cold wrath of Hollywood reality put a force choke on his elaborate plans. It’s difficult to judge “Babylon” in its current form since the film has been noticeably compromised. The PG-13 cut is streamlined to include only the barest amount of plot and the loudest amount of action, an edit rhythm familiar to the average Diesel fan, I’m sure.

Huge sections of the narrative have been erased, leaving the central mystery of Aurora…well, still a mystery by the film’s conclusion. Actors Charlotte Rampling and Lambert Wilson show up to play Aurora’s combative “parents” and their place in the overall scheme of things is blurred by the reconfiguration of the plot. Rampling is something of a villain in “Babylon,” but her motivation is missing, along with seemingly several of her big scenes. She ends up oddly disappearing from the picture in the third act as car chases and gunfire swoop in to numb the audience into a false sense of closure.

While plenty of “Babylon,” and its swirl of religious symbolism and messianic introductions, bewildered me, I won’t say it bored me. Even squished under Fox’s thumb, Kassovitz places his ragged Euro stamp on the production, leaving behind a gritty, well-funded vision of the future. “Babylon” benefits from impressive production design achievement and a generous consumption of a monster budget. The film looks great, and takes a few clever swipes at corporate logo omnipresence and clubland barbarism during the ride. The picture may be a mess, but it’s shot beautifully (by the superb Thierry Arbogast), scored with some gusto, and offers the screen a detailed world to survey with rising interest.

With the perennially dreadful Diesel in the lead, perhaps “Babylon” never held a true shot at greatness. The actor is unable to reach the few emotional peaks the film makes room for, leaving him more suited for the awkwardly placed action sequences. The material needed a softer presence in the deliveryman role, not an indecipherable hardass. Thank heavens for Yeoh and Thierry, who find the proper dramatic notes to play with the little they have to do.

As an offering of cheap sci-fi thrills, “Babylon” won’t satisfy the typical pushover crowd. As an intelligent discourse on the future of mankind, the film is too condensed to make any sense. “Babylon A.D.” is adrift, lost somewhere between the demands of a profit-manic studio and a passionate, unleashed director. There’s no way great cinema could emerge from that combustible mix. 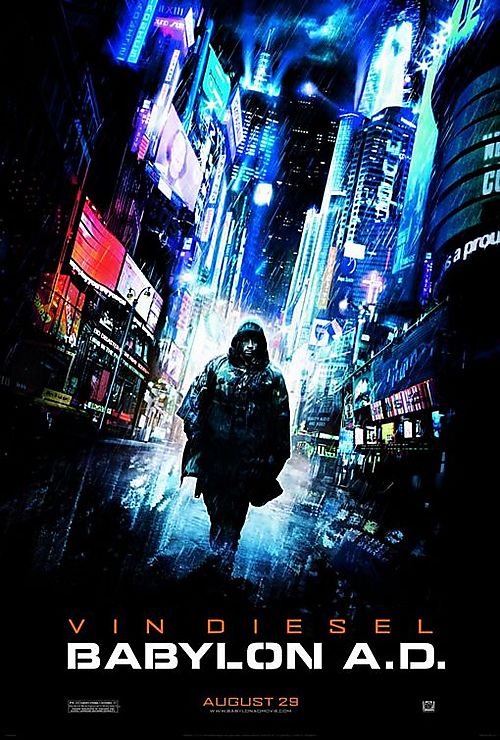 Vin Disel still sucks? Hard? Oh man...this does not bode well for "Too Fastest, Too Furirousest 19" or whatever sequel they're coming up with now featuring the "original" cast...

The movie had a lot going for it, but when you watch it, it's clear how strained it is and how it was kept from being what it should have been.

The R rating, and another 20 to 30 minutes onto this movie to develop the characters and plot properly easily could've made this movie B, or even A material. I think we can thank Fox for destroying it.

Plus, from other reviews I've read, as well as the international trailers I've seen, there's some key things missing from the film that would've beefed it up a lot nicer. I don't understand why we didn't get those extra 10 minutes. It wouldn't have saved it, I'm sure, but it might have helped make it better.

I'll wait for the unrated director's cut DVD that they'll inevitably throw out there, and I'll buy it, hoping they fixed it with a few more narrative moments and character building scenes.