Any film that opens with a comical beheading and electrocution deserves at least some praise, however faint it may be. A follow-up to the unleashed lunacy of 2006’s “Another Gay Movie,” “Another Gay Sequel: Gays Gone Wild” takes this improbable franchise even further into comedic dementia, eager to top the original picture in pure knockout vulgarity. I’d say it’s a photo finish.

Off to Ft. Lauderdale for a Spring Break blowout vacation, Andy (Jake Mosser), Nico (Jonah Blechman), Jarod (Jimmy Clabots), and Griff (Aaron Michael Davies) are at a loss for words when they arrive at their resort. Confronted with available men as far as the eye can see, the boys are tickled when the “Gays Gone Wild” contest commences, awarding points for sexual encounters and assorted mischief. Pushed into the madness of the week’s festivities, the men are forced to consider matters of the heart before indulging their carnal desires, leading to serious questions of self-acceptance in the middle of a sun-kissed orgy of sexual possibilities.

“Another Gay Movie” was a fearless production, allowing director Todd Stephens (“Edge of Seventeen”) to unleash his pent-up frustrations with Hollywood and gay cinema, crafting a farce that rarely paused for a breath and absolutely relished audience discomfort. It certainly was an experience to behold, even when the jokes were sprayed over the audience with firehose-like subtlety.

“Gays Gone Wild” inches further across the already entirely smudged line of taste. Confronted with new cast members (the transition is handled well via an opening dream sequence) and assuming new confidence after his original creation scored big with the intended demographic, Stephens heads right back to the deafening pitch of comedy that has come to define this newly-minted franchise. In short: “Gays Gone Wild” is a berserk, wince-inducing, carefree spit-take on the mating rituals of our heroes, who would like nothing more than to explore the boundaries of their appetites with the miraculously-muscled galaxy of partners surrounding them.

Oh, and there’s a supporting role saved for Perez Hilton.

The Perez idea is indicative of Stephen’s inability to judge material for true comic potential. Sure, there’s some wit laid out with nods toward “Heathers,” “Showgirls,” “10,” “Dawn of the Dead,” and the Hawaiian “Brady Bunch” episode arc. However, Stephens also makes time to showcase Perez, piggybacking on his questionable pop culture visibility, only to find himself stuck with the noxious celebrity blogger’s atrocious acting skills and his gift to ruin any scene he pops into. Portraying a religious zealot (a personality alteration instigated during a rocky bathroom oral sex session with a priest – the film shows little shame), Perez is so awful he can’t even manage to convincingly play himself. I give the performance one MS Paint semen dribble trickling down from a slack-jawed celebrity mouth out of five.

“Gays Gone Wild” can dash from a nightmare to a hoot in a nanosecond, but extending this picture over 90 minutes was a cruel mistake on Stephens’s part. In shorter, controlled form, this smothering experience would be easily tolerable, or at least digestible. Instead, the sequel only clicks when it serves a basic function to provoke and comedically spasm, and any extended exposure to these elements is bound to irritate in a hurry. There’s a promise made at the conclusion of “Gays Gone Wild” to send the boys into space. Let’s hope Stephens can snatch a more judicious editor for the next round. 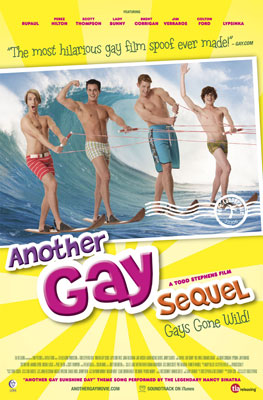