The longest river in Asia, the Yangtze has nurtured China’s countryside since time began; a flowing fingerprint that has come to define the hard-working inhabitants. The Three Gorges Dam is a hydroelectric project intended to generate valuable power to the land, at the cost of repurposing the natural flow of the river. It’s a contentious construction undertaking, but the real cost is found with the underprivileged citizens who live along the Yangtze. With over two million residents forced to relocate away from the rising dam waters, it’s left the county perplexed and resentful, now only able to rely only on themselves while the government looks away.

Directed by Yung Chang, “Yangtze” aims to unfold a larger story of anxiety through the experiences of two teenagers. Yu Shui is a peasant girl who hopes to move on to high school, a luxury her farming family cannot afford. Chen Bo Yu lives in the city, pushed into work against his desires. The two gain employment on a tour ship that caters to visitors who want float down the Yangtze to witness the natural beauty of the land and partake in Chinese customs not easily found at home. For the most part, these are elderly, frighteningly pink Americans boarding the ship and they demand a show, passing nonchalantly through historical and priceless cultural markers that will soon be completely submerged.

As much as “Yangtze” paints a disturbing portrait of ill-fitting consumerism in China, it hits an emotional bullseye when attentive to the teenagers. Yu Shui is a forceful subject for the director to follow, providing a rainbow of articulation as she moves from a shy, resentful girl to a faceless cog in the machine, slowly Westernized by her bosses and co-workers. It’s a difficult subplot to observe since the girl fights her makeover with teary, passive fury, while her family celebrates her employment, thrilled with the new source of income. Chen Bo Yu is the more traditional arc of an indignant kid unwilling to dilute his nature to meet the needs of his abusive customers, though he’s genuinely wowed by the tips. The mandatory short haircut? Not so much.

The juxtaposition of these gaudy ships and their careless customers with the mournful river community forced out is a potent visual tool that the film returns to time and again, strongly underlining the perversity of it all. The camera travels into other communities as well, giving the viewer a first-hand look at the bullying practices of government enforcers sent to empty homes through force or false promises. The film also showcases smarmy propaganda pitchmen, who show off the fancy new homes built for the farmers; homes, of course, few have the money to purchase.

The stunners come quickly here: watching the teens renamed “Cindy” and “Jerry” for immediate tourist comfort; Chen Bo Yu trying to make scripted small talk with two German men; the rising flood waters slowly erasing the pristine, misty land; a detailing of forbidden verbal interaction cues never to be uttered to an American; said tourists ridiculously dressed up in historical Chinese costumes for photo opportunities; and the final resting place for Yu Shui’s family, where new prices for food and water (once free for them to cultivate) will surely drive them to extreme poverty in no time.

“Up the Yangtze” is disturbing, yet carefully unfurls its horror, as if to recreate the suffocating impact of the flood waters and their ensuing, methodical havoc. The film presents a side of the world few are offered the chance to see outside of a tour boat, spotlighting trouble monumental in implementation, yet achingly personal in response. 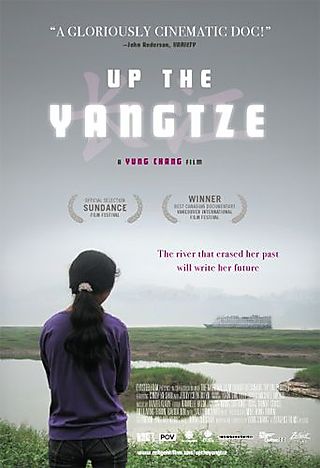