Now retired from their adventuring days, Rick (Brendan Fraser) and Evelyn O’Connell (Maria Bello, replacing Rachael Weisz) watch as their son Alex (Luke Ford) continues on their reckless, globe-trotting ways. When Alex uncovers the lost tomb of Emperor Han (Jet Li) and his Terracotta Army, it reawakens the fierce ruler from the afterlife, sending him on a quest for immortality. With a new mummy on the prowl, Rick, Evelyn, Alex, nightclub owner Jonathan (John Hannah), and a spiritual warrior (Michelle Yeoh) team up to prevent Han from reaching Shangri-La and ruling the world with his infinite undead army.

Considering 2001’s “Mummy Returns” grossed more than its 1999 predecessor, it boggles the mind to consider how Universal Pictures just simply sat on their hands and watched the demand for a new chapter in the O’Connell family saga wither away through a miserable spin-off (2002’s “The Scorpion King”) and the merciless passing of time. I mention the long absence because “Tomb of the Dragon Emperor” spends an inordinate amount of expositional time reminding the viewer what once lit up the imaginations of past summer moviegoing crowds, as if completely panicked nobody will remember that once upon a time Brendan Fraser plus undead CG demons equaled box office gold.

It’s a rotten, stubborn directorial endeavor, and since Cohen has little appreciation for legitimate big screen magic, “Tomb” suffocates under the filmmaker’s bile-slicked mandate that every single frame must contain a screaming or explosive element. “Tomb” is a hallow fireworks display (often literally), using the characters as anonymous action figures instead of trying to hammer out a decent narrative to employ their established appeal. The sense of archeology and sun-baked puzzling from the previous films is rubbed out, as are the wide open spaces, replaced in “Tomb” with tight, unconvincing sets plucked right out of a Sci-Fi Channel Original.

Perhaps Weisz made the right decision to bolt when she could, though her warmth and romantic glow is missed from the inert picture. Bello isn’t a satisfying replacement; she’s woefully miscast trying to match Fraser with limp quips and dreadfully-accented exhilaration, missing the doe-eyed fairy dust Weisz sprinkled before.

And speaking of replacements, how is the audience supposed to believe the pre-teen, thoroughly British Alex of “Returns” grows up to be a twentysomething American cowboy/tomb raider in the new film? Ford’s dreadful attempt to swallow his native Australian accent doesn’t help the transition. Neither does the fact that Fraser and Ford look like brothers, not father and son. Ah, but I’m sniffing around for logic, and that’s the wrong course for a “Mummy” movie.

The “Tomb” journey sends the characters to the Himalayas, where they battle Han’s goons with the help of a few towering Yeti (who apparently feed on a steady diet of American football), allowing Cohen to blow his sets up; to the streets of Shanghai, where Cohen can smash cars and blow them up; and finally the Chinese countryside, where Han’s CG soldiers fight a different set of CG soldiers. And yes, Cohen blows more things up. The man loves all things that go boom. It’s a repetitive cycle that pushes the actors to the background, even reducing Li and Yeoh to mere cameos (watch out, the marketing is deceptive) when those two icons should’ve been front and center for the entire run of the film.

The world didn’t need a third “Mummy” motion picture, and it certainly didn’t need one that descends further into mindless action and insipid screenwriting. “Tomb of the Dragon Emperor” is a terrible film, but even more insidious, it makes one wish for the good old days: when Stephen Sommers found time to ruin summer entertainment through his own brand of blaring, big screen misery; when the mummy was played by a doughy, hairless, spray-tanned, completely unthreatening South African actor; and when Brendan Fraser was actually considered a humorous presence by a select few.

There’s the magic of Rob Cohen for you: he makes awful extraordinarily nostalgic. 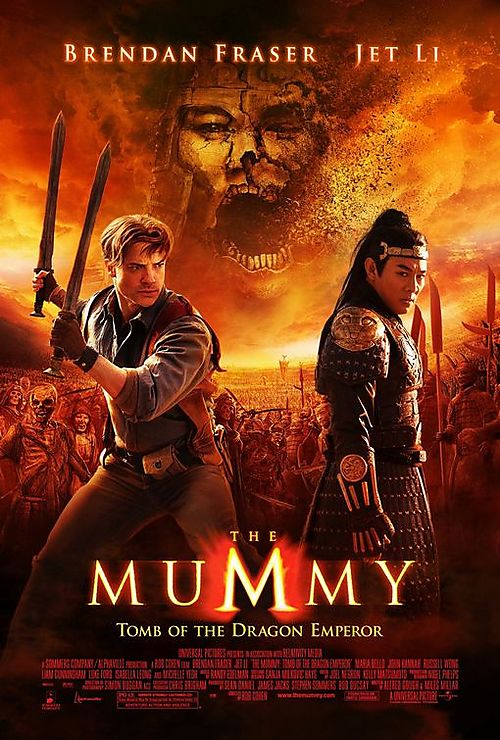