As Batman (Christian Bale) lords over Gotham City, he watches his efforts to curb crime, with the help of Lieutenant Gordon (a quite reserved and quite marvelous Gary Oldman), finally bearing fruit. Into his path walks Joker (Heath Ledger), a madman who wants to rule the local crime syndicates and watch the city burn to the ground. Overwhelmed by such a merciless foe, Bruce Wayne (Bale) seeks out new strategies and armaments to fight off Joker, while watching district attorney Harvey Dent (Aaron Eckhart) gain ground fighting crime legally, not to mention making moves on lost love Rachael Dawes (a mature Maggie Gyllenhaal, needlessly replacing Katie Holmes). Left to contemplate his original mission of justice, Batman/Wayne finds himself in over his head as Joker’s ruinous wrath is turned to loved ones and the greater integrity of Gotham City.

“The Dark Knight” is a raw nerve of a comic book film, bravely daring to go beyond the heroic norm and keep its fingers wet with the extremities of evil. There’s just no stopping its intensity and antagonism, reaching far beyond what many would expect from a Batman sequel to become something willfully hazardous. This isn’t a pow! bam! action fiesta, but more a crime story containing marvelous sprawl; a cinematic safe haven for iconic cartoon characters to be newly imagined as embittered pawns in the mighty chess game of Gotham City. The prize? Control of the streets.

Everyone wants the reins of the landscape and “Knight” observes this struggle with impeccable detail and lavish screentime. Credit director Christopher Nolan, who returns from “Begins” as a man on a mission to plunge even further into the heart of darkness, daring to portray Batman’s famous rogues gallery as the madmen they truly are. This is Nolan’s “Untouchables,” setting up Batman and Gordon as relentless hunters for justice, trying to squash their ultimate Capone: Joker. The story strangles the entire city, a new Gotham that eschews CG augmentation for historic brick and steel: a glorious use of Chicago city streets that are swiftly turned inside out by this absurd warfare.

There’s something delightful to be said about the hands-on-hips hero pose most superhero films subscribe to, but “Knight” heads the opposite direction, sliding into provinces of disturbing behavior and ruthless actions. How this sadistic picture slipped out of the MPAA’s fingers with only a PG-13 is a miracle, for Nolan amps up the nightmarish qualities that made “Begins” such a kick (including killing a few dogs, blowing up hospitals, and threatening children). Of course, it’s nearly all centered on the Joker, who steamrolls over his enemies with a homicidal taste on his lips that can never be licked clean. Taking out enemies with knives, bazookas, and even a pencil, the Joker has come to reign, and it’s a wondrous viewing experience to watch as Nolan takes the character to the extremes of execution without batting an eye. This Joker (as opposed to his more comical forefathers) is one terrifying bastard, a villain unable to be sated by monetary reward or underworld glory, just seeking out the gratification of unyielding chaos.

To watch the late Heath Ledger in this role is to watch an actor at the top of his professional game daring himself to go even further. Ledger’s Joker is a slimy beast with a carelessly stitched mouth, speaks with a creaky Midwestern housefrau accent, and uses his clown exterior to creep out the room. It’s a resourceful performance, not only because it articulates manically, but because Nolan finds an ideal home for Ledger’s affectations in this crushing carnival, fitting comfortably between Bale and his impressive growl and Eckhart, who’s uncharacteristically well cast as Gotham’s new beacon of tranquility. It’s a stupendous triangle of conflict, with delightful cast additions in Michael Caine as butler/taskmaster Alfred, Morgan Freeman as weapon specialist Lucius Fox, and, of all people, Eric Roberts, who oozes agreeable olive oil as Mafioso kingpin Salvatore Maroni.

“Knight” isn’t comprised entirely of alarm. Nolan is an astute enough filmmaker to allow in a few moments of geekgasm, including the emergence of the Batpod motorcycle, Batman’s new sonar abilities, and majestic shots of the crusader soaring through the night skies. “Knight” doesn’t equal the delirious novelty of “Begins,” but it has its share of goosebumpy moments to equal out the horror, even permitting the smarmy playboy character of Bruce Wayne a few unexpected, entirely welcome gun-dismantling, crime-thwarting moments.

It seems that the Joker isn’t alone in “Knight” when it comes time to terrorize Batman. The villain Two-Face also leaps into the fray, an addition the 150-minute-long “Knight” handles better than any other superhero film around. What’s fascinating here is Two-Face’s purpose not as a thorn in Batman’s side, but as the Joker’s ultimate perversion of nobility. The burned brute is not just unleashed to ‘roid up the third act, but to feed into the vast thematic underpinning of the picture; Two-Face brings essential focus to the battle between Joker and Batman, keeping the stakes sky high as the movie attempts to locate an appropriate exit both in action and psychological reflection.

I don’t know where Nolan keeps his stash of stupendous Batman conclusions, but, much like “Begins,” “Knight” ends on a salivating note of promise for the assured third installment, sending our hero off conflicted yet perfectly repurposed for a new dawn. The picture is a delicious antidote to plastic popcorn thrills, hurling the audience into the ferocious line of fire, watching the mighty Gotham City fall to its knees. “The Dark Knight” is epic, frightening, unforgettable, unstoppable, and every inch a classic Batman trial, brought to life with disquieting, mouth-slashing sincerity. 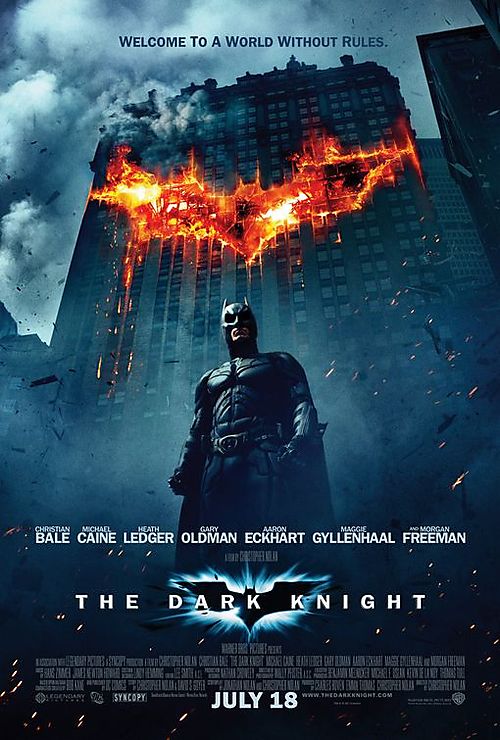 Rottentomatoes has accidentally recorded this review as rotten! Please fix it! As a fanboy, I need that number to go up, up, up.

For some silly reason, Rotten Tomatoes has your review listed as a negative on their site. If you haven't noticed, you might want to correct that.