When their parents (Mary Steenburgen and Richard Jenkins) marry after a whirlwind courtship, 40-year-old slackers Dale (John C. Reilly) and Brennan (Will Ferrell) are forced to become step brothers. At first, the men hate each other, irritated that their easygoing lives have been disrupted by mandatory interaction. However, when Dale stands up to Brennan’s bullying younger brother Derek (Adam Scott, nailing his antagonist role superbly), the men bond immediately, kicking off a relationship that threatens to destroy the house and the newlywed bliss contained within. Offered an ultimatum to either get jobs and grow up or be thrown out, Dale and Brennan panic, fearful of adult lives and the challenges they bring.

Surely “Step Brothers” was catnip to Ferrell and Reilly. Working off their own story idea, the film is little more than a chance for the actors to romp around like kids, exploring their childlike nature to expected slapstick standards. Director/co-writer McKay need only turn on the camera to capture this superficial examination of Peter Pan syndrome, leaving the heavy lifting to the actors as they wrestle around the frame, trying to outwit each other with improvisations. It’s a fetching package, as Ferrell and Reilly are sparkling jewels of immaturity, attentive to every last moment of tantrums and resentment.

What’s changed in this particular brew is the R-rating. For “Anchorman” and “Talladega Nights,” the productions were pinned down by PG-13 limitations, forcing McKay and Ferrell to carefully work around blunt obscenity to make their smuttier points. “Step Brothers” heads in the opposite direction, indulging every possible pop of profanity, even asking Jenkins and Steenburgen to cuss like sailors to compete with the rest of the cast. Much like the upcoming “Pineapple Express,” the deluge of potty-mouth punches grows tiring and ineffective in a hurry. It’s hard not to sound like an old fuddy-duddy here, but the actual act of swearing just isn’t enough to extract laughs.

“Step Brothers” is consumed with shock value, with Brennan forced to lick dog feces or use his testicles to abuse Dale’s prized drum set, and it dilutes the viewing experience. McKay shows miserable judgment and timing here, passing on the chance to erect a sublime domestic disturbance comedy about maniacal grown children to dumb the material down to toxic base sensibilities. Where’s the fun in that? “Step Brothers” is often lost at sea, paddling helplessly amongst its own needless vulgarity. There’s nothing wrong with stupid, as long as there’s a little more to the show than that.

Saving the film from McKay are the actors; while they’re pitched at a deafening level of infantile babbling, they really help “Step Brothers” find something of a fruitful comedic bounce. Ferrell and Reilly are a wonderful team, elated to be capturing the harmony of two men who refuse to grow up. It’s all “Star Wars” shirts, bunk beds, Steven Seagal bonding, and whispered bedtime arguments for Dale and Brennan, and the actors capture the impish spirit of being nine-years-old and trapped in an aging body. The duo remains strong here, even when they lay on the more exhaustive qualities of profane behavior.

I certainly laughed while watching “Step Brothers,” and to the less sensitive (a.k.a. drunk, stoned), McKay’s blunt execution will probably find a perfect home. What nags at me is the plot and casting, which form a perfect launching pad for something demented and delirious to emerge, and while “Step Brothers” touches inspired insanity intermittently, it never stays put, resulting in a picture of pleasing bedlam, but never consistent bedlam. 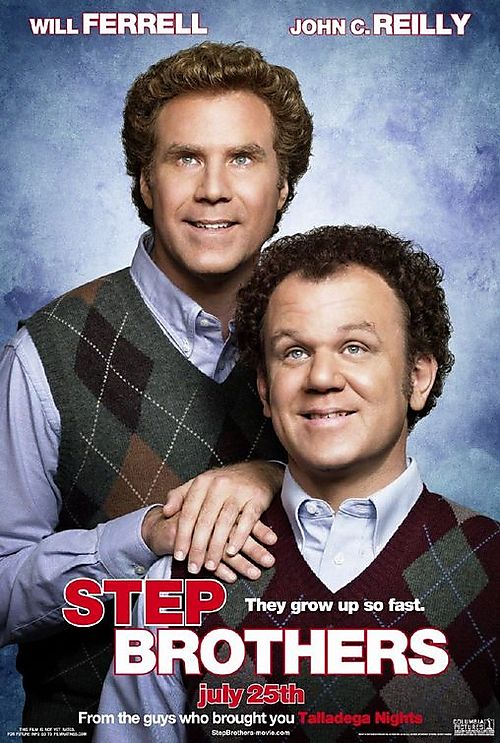 I agree with your review for the most part (I would have given it a B-minus, our site gave it 3.5/5). It wasn't Talladega Nights, but the film had that quotability that is the trademark of all these films. I keep calling my fiance Dr. Angelface (it's annoying the hell out of her :))

I think the outtakes on the DVD are going to be great. They probably have a good hour of stuff from the bedroom scenes alone.