Grandson to a famous simian who long ago heroically launched into space, Ham (voiced by Andy Samberg) is stuck in the circus, shot out of a cannon nightly to painful results. Recruited by the government to take part in a new space mission, Ham is thrown together with fellow chimps Luna (Cheryl Hines) and Titan (Patrick Warburton) and sent into training. Their mission is to travel into deep space, enter a wormhole, and explore an alien world. Once arrived, the situation swiftly unravels, forcing the hairy explorers to band together to battle Zartog (Jeff Daniels), a local who’s taken control of a previous NASA exploration vehicle and rules the land with his metallic might.

“Space Chimps” isn’t exactly the level of quality animated filmmaking audiences might expect in the summer season. It’s a modest production from Vanguard Animation, sent into the multiplex wilds to vacuum up the dollars that haven’t already been collected by Pixar. “Chimps” is really just one lucky DVD production that has fallen haphazardly into a theatrical release, and the experience watching it reinforces this sentiment with exceptional force.

I will write this about the picture: it plays better as it goes. Not many films can claim such progress, but “Chimps” does; taking its sweet time to grow on the viewer. To get there one must ignore the crude animation, awful lip-sync, and the minefield of dud jokes, and that journey is tiring. “Chimps” is certainly a sincere production, following closely to the simple edict of entertaining families. That’s nothing to be ashamed of, but the picture is uninspired and complacent with bizarre pop culture references (an “Axel F” callback, really?) and anemic plotting, never challenging itself with a more confident tone or skillful comedic voice.

Thankfully the voice cast at least adds some spice to this tasteless cartoon broth. The production uses Samberg’s wiseacre charms to moderate use, overextending the comedian with instruction to fill every silence in the film with a quip (his aim is so-so). Better is Daniels as the dim-witted heavy, strangling his squeaky voice to a charming degree. Also fun in a small role as a tiny, incandescent alien aid to the chimps is Kristin Chenoweth, who was born for voicework and gives the picture a proper spark right when it needs it the most.

As bland matinee diversions go, “Space Chimps” isn’t the worst thing to plop your child in front of, but it’s hardly worth the hundreds of dollars it takes to get a family to the movie theater these days. It’s a banana-popping, planet-hopping fantasy more suited for DVD, where the budgetary and narrative limitations aren’t so harshly felt. 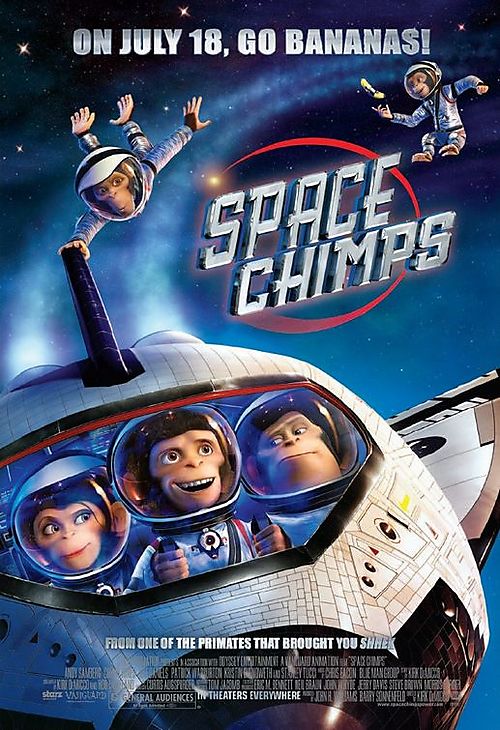 You are immediately forgiven for the Wall-E review...

You are immediately forgiven for the Wall-E review...