Sent on a reporting assignment to cover the life of the average fire department facility, T.V. personality Angela (Manuela Velasco) is stuck with the mundane details of fireman life. Becoming frustrated with her botched attempts to add some spice into this monotonous story, Angela’s fortunes change when a call arrives requesting emergency assistance at an apartment complex. Tagging along with the fire trucks, Angela and her cameraman Pablo head into the building, only to be quickly sealed in by faceless government officials. Now trapped with angry cops, paranoid residents, and an anxious medical professional, Angela and her roving camera discover the true reason for the quarantine…and it’s hungry for flesh.

There’s something beautiful in the courageous way “Rec” composes scares. The market for reality horror has become saturated, and “Rec” doesn’t feature the most original concept to flop around in buckets of blood, but directors Jaume Balaguero and Paco Plaza challenge the expectations set for this low-budget, high-concept endeavor by weaving together a symphony of scares in increasingly inventive fashion.

I was thrilled watching “Rec” snowball into a seething siren of panic, observing Angela and her camera fight to capture the unfolding drama of the quarantine, hoping for a juicy government injustice tale, only to witness the matter go from curious to life-threatening as the bodies start to pile up with no hope for survival. Shot POV from Pablo’s television camera, “Rec” can be a jittery, quaky visual affair with liberal deployment of zooming and a penchant for actors screaming their lines hysterically into the lens. A lesser filmmaker would’ve abuse this privilege, but Balaguero and Plaza take the first-person format to dizzying new heights.

The editing here is tremendous, hiding the necessary cuts that turn moments of fright into utter madness. Also impressive is the cast, who rarely give the gimmick away, even in a few comedic scenes included to give the viewer a needed rest. As witnessed in the aforementioned “Cloverfield” and “Diary of the Dead,” conjuring reality is not an easy accomplishment, yet “Rec” stays within the sight lines of plausibility, at least in terms of acting.

The rest of the film? Dear lord, I hope it remains fiction.

I don’t want to give too much away when it comes to the finer points of “Rec” (sure to be thoroughly pantsed in the goofy-looking American remake “Quarantine,” coming this fall), so I’ll just write simply that Angela has to battle her way through a living nightmare of body-hurling, throat-munching, night-vision horrors, with plenty of surprises leaping feverishly around the frame for good measure. I wasn’t tickled with the film’s climatic stab at establishing some iffy logic to the proceedings, but it’s an easily forgiven blunder in a movie this brilliantly executed and insistently frightening. 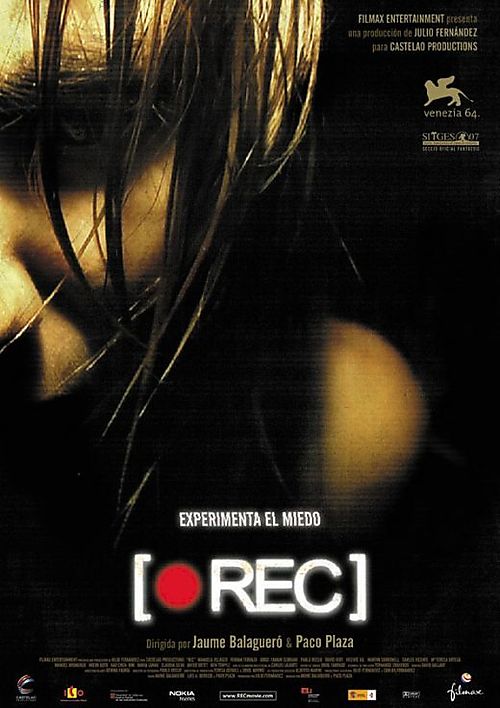 Did you catch this in a theater? Has it opened wide yet? A good horror movie ... what a rare find.

I'm sure you know that Hollywood did its version of this movie, titled ... originally enough "Quarantine", set to open October 17th.

The trailer is available here: http://www.apple.com/trailers/sony_pictures/quarantine/

The shacky cam - quick cut - Cloverfield look of the movie does not entice me.

One of the best horror films I have ever seen.
When it began I was sitting upright, and by the end I was almost on the floor, pulling my hair in fright.