Once the king of comedy, it’s been a disheartening journey for Eddie Murphy recently; he’s failed to remind audiences what once made him such a hot comedy commodity, only to see his mojo dissipate through a series of bad script choices and forgettable kid film diversions. I wouldn’t label “Meet Dave” a reputation-revitalizing turn for the actor, but the picture is admirably competent, delightfully silly, and absent a majority of repulsions typically associated with an Eddie Murphy family film.

Sent to Earth to retrieve a planet-killing device the size of a small rock, a crew of Lilliputian aliens man a human-sized spaceship that goes by the name of Dave (Eddie Murphy). The Dave crew soon meets up with single mom Gina (Elizabeth Banks, working wonders with a thankless role) and her son Josh (Austin Lynd Myers), who has found the rock, only to lose possession of the crucial device to a school bully. Now set free in New York City, the crew (including Eddie Murphy, Gabrielle Union, and Ed Helms) uses Dave to absorb as much human culture as they can, finding attachment to Gina and Josh, and getting wrapped up in Earthbound emotions they are unaccustomed to.

Let’s be honest, with Murphy and director Brian Robbins (“Norbit,” “Good Burger”) attached to “Meet Dave,” expectations couldn’t fall any lower. Robbins is a studio zombie with little artistic aspiration of his own, while Murphy likes paychecks and trading off his past. Let’s just say I wasn’t pumped to sit down with “Meet Dave.”

Then something funny happened to these men: screenwriters Rob Greenberg (“How I Met Your Mother”) and riff virtuoso Bill Corbett (Crow deux on “Mystery Science Theater 3000”). The gentlemen have created an engaging sci-fi adventure for Murphy and Robbins, putting some genuine thought into the scenarios, locales, and punchlines of the picture, giving Robbins and Murphy a screenplay that even they couldn’t fully knucklehead up, despite their best efforts.

Perhaps I’m being too hard on Robbins, who actually connects with this strange mixture of “Honey, I Shrunk the Kids,” “Star Trek,” and “Innerspace.” It’s the most competent directorial job he’s presented to date, creating a durable visual foundation for Murphy to play around on. There’s an amazing playground of differing scales to embrace in this script, with Robbins putting in the cartoon work to sell the madness of little aliens vs. the big, bad world. Of course, I wasn’t thrilled with predictable detours to potty humor, but “Meet Dave” manages to stay fixated on its intent: to massage the most weirdness out of the title character’s alien status.

Maybe to Murphy, “Meet Dave” is nothing innovative, but there’s a recognizable funny bone spark about him here that’s been lost for some time. Dave offers Murphy an opportunity to try on some clowning, parading around in a blinding “Fantasy Island” suit and making faces for the camera in a sociable, sillyheart manner that’s exceptionally endearing. The spaceship Dave is Murphy allowing himself a blast of atypical humiliation, and the actor wears it beautifully. The commander of spaceship Dave permits Murphy to stroke his well-documented Captain Kirk obsessions, and while it’s the less showy of the two roles, Murphy achieves a pleasing Starfleet tone as the leader of the tiny pack.

It’s not surprising to find that “Meet Dave” loses its way once sentimentality is introduced. Oddly, Robbins doesn’t shove the film into tears and morals mode, only lightly coating the film with some uplifting messages and spending minimal time with romancing Dave crew members. Honestly, I would rather see more handholding and “It’s a Wonderful Life” inspired sentiment than some of the more loathsome limp-wristed jokes (the Dave weapons specialist finds a love for musical theater and hairstyling) shoved into the material out of sheer desperation.

“Meet Dave” gets back on track with a smorgasbord of thrilling near-misses as the miniature Dave crew hits the streets of New York to save the day, dodging cars, getting stuck in gum, and using grocery store plastic bags to float to safety. I’m sure a more refined filmmaker could’ve squeezed the premise tighter for sophisticated laughs, but as family-angled sci-fi comedies go, “Meet Dave” is actually quite agreeable. Who knew Murphy still had some fun left in him? 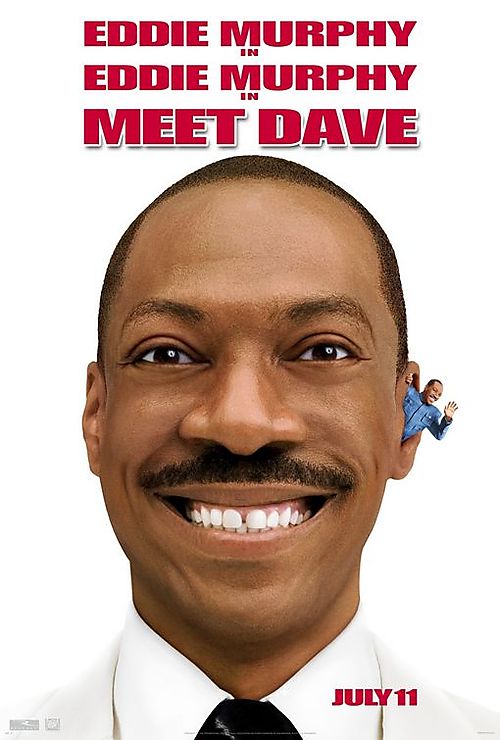 Saw this with a screening crowd -- usually a group that laughs heartily at even mediocre comedies. And there was mostly silence throughout. I agree it didn't veer down paths you expect it might, but it still felt like a very high concept that wasn't smart enough to use it to its advantage.