“Man on Wire” is an odd, enchanting documentary chronicling Petit’s history, training, and attempt at this incredible feat of patience and foot-first skill. Directed by James Marsh (“The King”), “Man” bridges together news footage, Petit’s own home movies, modern-day interviews, and dramatic recreations to explore this event and find a sufficient way to draw the viewer into the suspense. Marsh deftly weaves together the multiple sources of insight, erecting a portrait of a slightly loony guy who craved attention and the thrill of success, and how he manipulated (or won over) a number of accomplices to help him carry out rather extravagant designs of achievement.

Of course, it all boils down to Petit, who is quite the character in “Man,” emphatically communicating his mindset 35 years ago when he started working out his high-wire routines. Dancing around the Eiffel Tower and the Sydney Harbour Bridge brought Petit fame and swift arrest, but the daredevil acts didn’t satisfy his craving for performance splendor. He wanted a bigger, more profound statement of chance, and that opportunity arrived in the semi-completed construction of the World Trade Center.

It took a considerable amount of time and planning to even attempt a stunt on this scale, and “Man” works the tension like a top-shelf thriller, exploring the fears and regrets of the nervous participants and evoking the location with tremendous period impression. At times, “Man” is a flat-out valentine to the Twin Towers, marveling at the extended construction phase and their place in NYC history, imparting the film with an exquisite aftertaste of poignant nostalgia.

“Man” is something of a high-wire act itself, taking recorded history and repurposing it into a mystery with a conclusion both unexpected and bravely philosophical. As much as the documentary thrives on the potential execution of such an outrageous act, “Man” is ultimately more concerned with the psychological threads. Why was Petit so consumed with this dangerous undertaking? Why did so many people find sympathy with him? The resolution may not surprise, but the journey surely will, resulting in a magnificent, often breathtaking document of a man who desired a moment to touch the heavens. Literally. 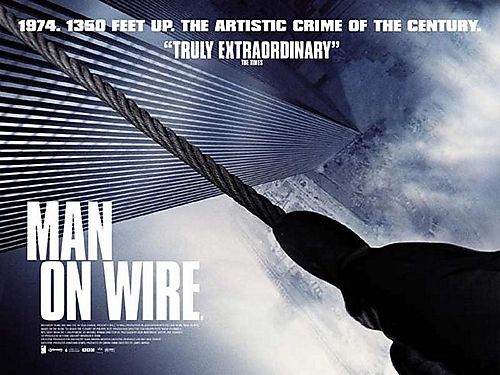