Working herself into a stupor trying to hold her idyllic Greek island hotel together, Donna (Meryl Streep) is preparing for the wedding of her daughter, Sophie (Amanda Seyfried), inviting her old friends (Christine Baranski and Julie Walters) down for the celebration. However, Sophie has plans of her own, sending invitations to three of her mother’s past lovers (Pierce Brosnan, Colin Firth, and Stellan Skarsgard) to find out which man is her real father. Donna, thunderstruck over seeing these eager candidates back in her life, immediately panics and spends the long weekend trying to avoid a total meltdown as the rush of memories overwhelms her and complicates the festivities.

Approaching “Mamma” is a problematical prospect: to enjoy it to the fullest extent you must a) love ABBA and b) have some working knowledge of the Broadway show on which this film is based. Without these components in place, “Mamma” is going to feel endless, dreadfully over-caffeinated, and perhaps downright childish. It would be a dream for everyone to participate in the picture and come out with an engorged heart and a Google map to the nearest glitter boutique, but let’s get real here: “Mamma” is not for every taste.

Gussied up and streamlined for its big-screen debut, director Phyllida Lloyd (who directed the stage version as well) has refocused the colossal energy of the piece, attempting to strategically portion it out for painless multiplex consumption. In any incarnation, “Mamma” is a bullet train of candied romantic stupefaction, lending inescapable yearn to the characters through the application of bubblegum love songs, set against an impossibly heavenly Greek locale. On the stage, the musical strived to evoke Donna’s trials with swift timing, song cues that preyed upon the element of surprise, and bellowing audience reaction. The film doesn’t share such comfort, and while it hasn’t been exhaustively reimagined, it’s been pleasingly filled out to create a more encompassing experience for all.

What this “Mamma” has to deal with are bona fide cinema stars, not comprehensively-trained theater actors, so “Mamma” pumps up the soundtrack, offering improved sonic depth to help out the less musically-inclined talent. Make no mistake, performers like Streep and Seyfried belt out the hits like heavyweight champs, able to follow the twisty ABBA melodies without being thrown off course. Streep especially winds up for the tunes, hurling her whole body into every lyric while Lloyd sprints around trying to find angles to best beautify the performance. The boys can barely keep up with her, but I was particularly smitten with Brosnan, who doesn’t possess golden pipes (quite the opposite, actually), but gives his singing a fighting shot, helped out significantly by the enhanced soundscape and the contact high from Streep’s keyed up performance.

Special praise must be reserved for Seyfried, who captures Sophie’s bewildered state of panic and gentle paternal desires with uncharacteristic polish, considering the actress has previously made a career for herself in unremarkable teen fluff. It’s the first adult performance from Seyfried, and she anchors the picture with a small, doe-eyed window of emotional reality. It’s vulnerable, stirring work I hope to see more of. Seyfried nearly steals the movie away from the pros.

“Mamma” is all about vitality, and the picture is legitimately exhilarating at times, turning songs such as “Dancing Queen” into massive island-wide dance numbers, or giving the critical “Voulez-Vous” number a whirling quality to match the chaotic requirements of the scene. Lloyd isn’t an innovative filmmaker, but her instincts and history with the show serve the film extraordinarily well, underlining the participatory nature of the production at crucial intervals, making sure the audience is still along for the ride. However, her inexperience with filmmaking hurts the picture’s early going, as scenes with Donna and best pals Rosie (Walters) and Tanya (Baranski) are sold with a blood-curdling shrillness that was expected on stage, but odious on the screen. Trust me, while the initial moments are played for maximum sun-baked squeak, the picture eventually catches on and settles down to a more harmonious roar.

Of course “Mamma” lurches for the throat with its high-flying, bell-bottomed feistiness (a quality that extends into the blinding end credits). It’s a musical hell-bent on extorting smiles; an infectious piece of 1970’s hokum played at a vociferous, yet agreeable pitch. “Mamma” is intended only for the open-hearted, as cynics will find no island of comfort here. Watching the film rear back and launch constant fireworks of joy is a wonderful thing to behold, positioning itself as an ideal summer diversion to counteract all the cartoons and superheroes. “Mamma Mia!” is a heavy dose of syrup, but it stomps proudly and effectively, delivering huge on promises of ABBA-approved bliss. 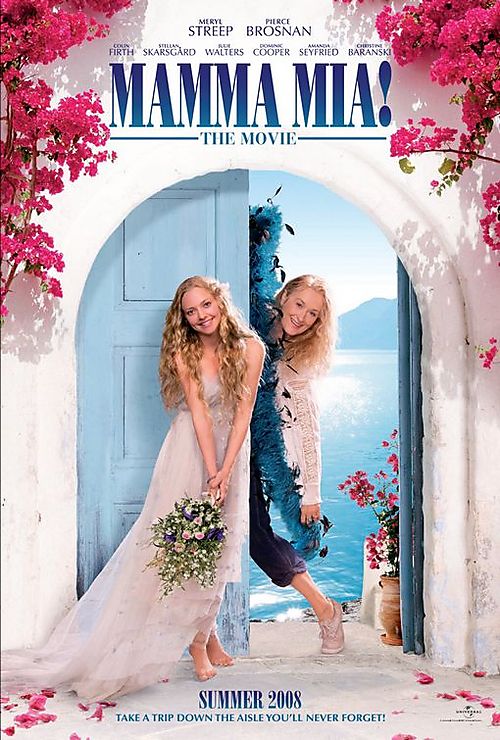