So, nothing makes more sense than to remake it over 20 years later with an intolerable cast, rotten visuals, and a soundtrack that will make you hate the very concept of music. Slap a pseudo-sequel title on it and the fans are sure to lap it up!

Off to make a life for themselves in the surf town of Luna Bay, siblings Chris (Tad Hilgenbrink, the Steve Guttenberg of DTV productions) and Nicole Emerson (Autumn Reeser) are hoping to start over after the death of their parents. A former surf pro, hotheaded Chris meets uber-cool Shane (Angus Sutherland), the drowsy king of the town and head of his own vampire clan. When Nicole falls under Shane’s spell and becomes the undead, it’s up to Chris to save her, teaming up with vampire hunter Edgar Frog (Corey Feldman) to combat Shane’s sadistic gang of “suck monkeys.”

I lack a doctorate in the minutiae of DTV sequels, but the few I have sat down with share a common trait: they ain’t sequels. “The Tribe” doesn’t challenge the mold, preferring to tell the exact same fish out of water, virginal seduction vampire tale, only now the emphasis is on trendy sporting equipment and painfully affordable actors. Feldman is the film’s lone tie to the 1987 original, which makes him either the most popular character to emerge from the Schumacher film or the most hard-up for cash. I’ll let you, the kind reader, decide.

The director here is P.J. Pesce, who previously gave the world “Sniper 3” and “From Dusk Till Dawn 3,” which makes this sequel something of a promotion. He’s now moved up to twosies! Pesce approaches “Tribe” in a very workmanlike fashion, merely snapping together the pieces of the plot and glazing the results with clichéd action camerawork and an uninspired cinematographic glow from shooter Barry Donleavy, who has the unfortunate role of following the blazing anamorphic beauty of Schumacher’s film. There’s no stimulation to Pesce’s storytelling; the filmmaker just glumly ticks off the plot points and geyser gore moments before wrapping the entire thing up with an unavoidable promise of another installment.

The original “Lost Boys” had effective twists and animated performances, with Schumacher twisting the horror knife slowly to drag the audience into the nightmare. Granted, “Tribe” is a cheap DTV affair, but there’s absolutely no suspense here. Pesce is more interested in mean-spirited violence, which robs this garbage of any charm, not to mention saving room for hilarious soft-core, grind-heavy love scenes in place of genuine romantic participation. Just because it’s a pointless cash-in doesn’t mean it has to play dead, but perhaps that’s expecting too much from Pesce, who doesn’t seem to have an artistic bone in his body, “Tribe” the latest step on his personal mission to stay out of poverty. A valiant goal, but did he have to ruin such a great film to keep his head above water?

The acting is uniformly detestable, with our hero Chris showing an emotive depth typically reserved for a Mountain Dew commercial. As the eye of the vampire hurricane, Angus Sutherland is a greasy blank slate, preferring to portray his woozy seductive qualities as though he was blitzed on wine coolers. Sure, it’s cute casting to put Kiefer Sutherland’s (the vampire OG from “Lost Boys”) half-brother in virtually the same role, but the young Sutherland is not an effective menace, and a barely alert actor. It’s really up to Feldman to liven up the movie with his growly paranoia, and, for about a minute, it works. Then it swiftly returns to sad as thoughts turn to the frighteningly stingy production budget, which couldn’t find a few bucks in the couch cushions to bring Jamison Newlander (the other Frog Brother) back into the fold.

Parading around on skateboards and motorcycles (is this Spielberg’s Lost Boys?), asking the derivative goons of the band Aiden to cover (and thoroughly decimate) “Cry Little Sister,” and generally rehashing the exact same plot as found in the previous film, “The Tribe” is a relentlessly silly, deflating film to watch. There’s no imagination on display here, and attempts to poke some fun at the situation (there’s now a fat, old shirtless dude gamely working a sax) bring grimaces, not laughs. As if the world needed another reason to celebrate “The Lost Boys,” “The Tribe,” and every second of its bumbling uselessness, just made me want to hug Joel Schumacher’s film even tighter. 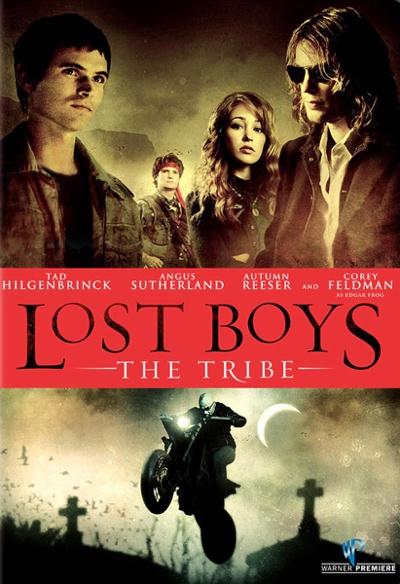 Oh my goodness this movie looks like a piece of crap. But damned if I don't have "Cry Little Sister" just CRAMMED in my head now...

I agree that the film was pretty much a piece of crap, but I thought they did an excellent job of paying homage to the original, which kept me entertained. When I saw the sax player on the corner I lost it :)

This movie was a rotten piece of vomiteria! YES....I made up a new word just to describe this sh*&ty film! It is not worth renting...not worth even 5 minutes of watching!!! I was so excited about a sequel to the Lost Boys...one of my fave horror movies of all time.

In a nutshell, there are no salvagable aspects of the movie. Acting was flat, plot...oh wait...there wasn't one...and even the makeup were not engaging or believable.

This movie could have been soo much better! I mean..they got Tom Welling for the friggin Fog remake...they could have spruced it up for a theatrical release...but instead, Warner Brothers threw it together without any real entertainment value other than the fact that this film shares the same name as the first movie.

I thought it was Jason Patric in the original, not Rob Lowe. Anyway, there was no real reason for this sequel other than a quick cash grab. I'm still holding out for a License to Drive prequel.

Sorry, I forgot about the poster. :) The really disturbing Rob Lowe poster, disturbing in the fact that Corey Haim's character was what? 13? Confusing.

Was Corey Haim in this one at all? I caught about five minutes of his reality show and he was pulling an attitude on the set. Thought they might have cut him out as payback.