2004’s “Hellboy” was a sprawling, mysterious, comical, slimy, and idiosyncratic monster movie. “Hellboy II: The Golden Army” has all of those qualities and one more: restraint. Well, at least a newfound sense of limitation; this sequel overdoses in a big way on fantasy tangents, yet, unlike the earlier picture, it clicks together with a greater, more direct geek panache.

On orders to keep his crimson mug out of the public eye, facing the domestic wrath of pyro-ready girlfriend Liz Sherman (Selma Blair), and trying to console amphibious friend Abe Sapien (Doug Jones, in both body and voice this time out) as he explores love for the first time, Hellboy (Ron Perlman) has a full dance card of problems. When ancient royalty Prince Nuada (Luke Goss) rises up to seize control of a magical crown that controls the all-powerful robotic Golden Army, it’s up to Hellboy and the BPRD to stop him. However, as the human-friendly demon gets closer to killing Nuada, he’s forced to reconsider his place in the world, and where his allegiance truly lies.

It goes without saying these days that writer/director Guillermo del Toro has one of the most powerfully erect imaginations in the entertainment business. His insatiable desire for all things supernatural is a stunning obsession, leading to a career slanted toward the continual evocation of the unreal. The effective “Blade II” aside, “Hellboy” was truly del Toro playing in a conventional Hollywood sandbox, and it seemed to wear him down. For a film sporadically delightful and containing unforgettable characterization, “Hellboy” felt hopelessly immobile, losing itself entirely to the excesses of genre requirements in the final reel, stealing the small handfuls of glee almost accidently left behind.

It’s interesting to note that “Golden Army” is del Toro’s first film since his 2006 triumph “Pan’s Labyrinth,” and a familiar fantastical blood still courses through his veins. The new Hellboy adventure plays as though it was made by a man emboldened by his recent directorial choices, taking a beloved franchise and embracing it with every bit of love and newfound power he could muster. “Golden Army” is an uninhibited snapshot of del Toro’s gummy ambitions, now allowed a proper big-ticket budget to imagine worlds beyond our own, creatures of every possible angle and temperament, and a threat worth summoning building-smashing bravery to fend off.

However, as boundless as del Toro’s gusto is, he’s still short a certain ability to rein all of his ideas in and sharpen his storytelling skills to a fine, effective point.

“Golden Army” loves its monsters: there are creatures stomping over nearly every frame of the film, filling this expanded world with a community of hostile outcasts to find a more suitable context for our hornless hero. The make-up and CG work in the film are outstanding, but it comes at a crushing price: it distracts del Toro. With a veritable “Muppet Show” of goblins and assorted blobs running around, the director becomes enamored with every Forrest Ackerman detour, often applying brakes to the film to monitor the horror, which effectively loosens the already threadbare tension of the film (the Nuada subplot is a dud). There’s little doubt del Toro puts on one helluva show, but he’s a kid in a candy store in every release, absent a specific discipline that could merge wondrous beastly expressions with a rigid pacing and exhaustive dramatics.

Could you imagine “A New Hope” set entirely inside the Mos Eisely cantina? “Golden Army” comes dangerously close to that unpleasant aesthetic too many times.

Once del Toro is pried away from his fiendish vices, “Golden Army” reveals itself to be a wonderfully touching character odyssey for Hellboy, as he struggles with his place among the humans, not to mention his difficulty expressing love for Liz. Perlman is just so positively perfect in this role that every scene with Hellboy that doesn’t involve things going kablooey is a delight, furthering the soul-searching needed to temper the outrageousness of his exterior. The director even manages to sneak in magnificent, beer-fueled bonding time between Hellboy and Abe, refreshing the friendship between “Red” and “Blue,” while also giving the fish-man a little more to do with a bizarre, yet quite fruitful romantic subplot. There’s also a new boss for the BPRD in Johann Kraus, a steampunk-inspired creation who looks like a robot and speaks with a  goofy “Hogan’s Heroes” German accent (voiced by Seth MacFarlane), who brings fresh energy into the film. An energy that takes a good half of the movie to compute, but eventually falls into line with del Toro’s exaggerated comedic beats.

I enjoyed “Golden Army” much more than the original “Hellboy,” but the concept still needs a fixation outside of ghouls and goblins. The moments that light up this sequel are the personal asides, infusing resplendent warmth that del Toro could manipulate even further for maximum investment. Surely “Golden Army” fulfills every sci-fi fantasy around, but watching Hellboy find his purpose, contemplate his newly complicated future, or recall his past (a lovely prologue shows the character a curious boy in a veritable Jean Shepherd Christmas card) is where the real awe of the premise is found, not by dancing the “Monster Mash” until your eyes bleed. 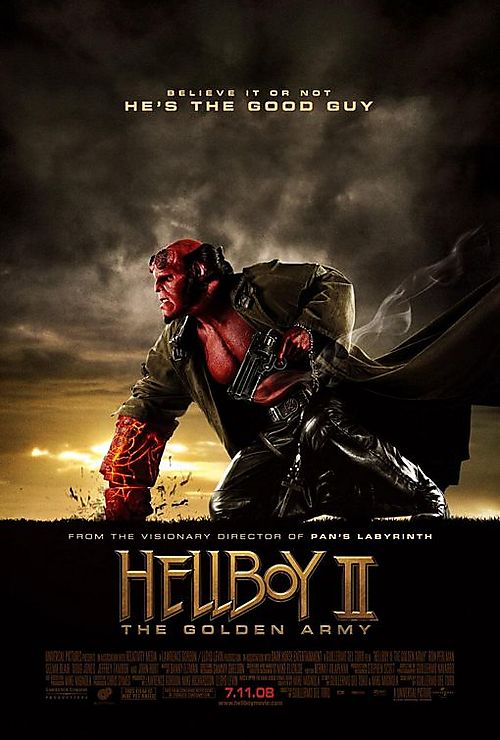 Where are all the nerds with their comments?