After suffering a head injury, Cooper (Matthew Broderick) has been left with a sketchy memory, losing loved ones and his job to his inability to concentrate. Traveling to rural Illinois at the behest of his mother to look after his mentally questionable Uncle Rollie (Alan Alda), Cooper finds a mess at home and his old love Charlotte (Virginia Madsen), who is newly single. When Rollie discloses he’s the owner of a rare Frank Schulte baseball card with a desire to sell, the gang heads to Chicago to a card collectors convention to price the prize out. Looking for easy cash, Cooper instead finds increasing complications, trying to keep order while Rollie flirts with scam artists.

Surely “Capacity” is a common collection of oddballs and sitcom situations. The quick, unfair comparison would be to “Little Miss Sunshine,” as “Capacity” glides on a series of episodic setbacks and takes place in a specialized environment. However, Kinney isn’t aiming for a distinct pitch of quirk here, just a comfortable edge to the whole endeavor that doesn’t topple the laughs, only winding them from time to time. “Capacity” doesn’t look at the issue of Alzheimer’s or head trauma with a sobering scientific hold, instead taking an unsettling snapshot of social trauma, as Cooper and Rollie enjoy life to the best of their ability, but can’t help being tripped up by their afflictions.

Kinney shows a comfort with the screenplay by Sherwood Kiraly (who adapts from his own novel), smoothly moving the characters around absent the expected outbursts of melodrama. The filmmaker wants the audience to laugh with our heroes, sneaking in some broad and subtle stings of comedy, especially with Cooper, who finds his mind failing him at all the wrong times. It’s a lovely interpretation of a question mark from Broderick, who employs his crack timing to lend the character the ideal amount of exasperation; a man who watches his uncle fall apart, only to realize he’s rowing the same boat of fractured recollections.

Also a joy to watch is comedian Louis CK, who shows up in a supporting role as Cooper’s A.A. indoctrinated co-worker. The actor doesn’t get a huge slice of screentime, but he makes his moments count, splashing the film with distinctive comedy colors, while hilariously working his character’s trait as the lone voice for violence against the convention hucksters.

The baseball card conceit plays a major role in the film’s second half, with Cooper trying to get Rollie the best price for his treasure while an unscrupulous dealer (played by Bobby Cannavale) takes advantage of the memory gaps. Kinney hopes to massage the material to a boisterous, audience-pleasing conclusion and it’s effective, just not necessary. “Capacity” offers more value as a character study and witty comedy than the ending suggests, showing Kinney a better filmmaker with humans than situations. 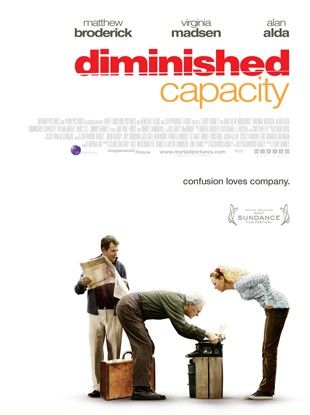