Trying to make ends meet in Scotland during the 1920s, Mary (Catherine Zeta-Jones) and her daughter Benji (Saoirse Ronan, “Atonement”) work as Dickensian con artists, passing themselves off as psychics of atypical ability. Learning of Harry Houdini (Guy Pearce) and his contest that will reward $10,000 to anyone who can determine the last words of his dead mother, Mary makes it her mission to find out the answer by getting close to Houdini when he arrives for a tour. Beguiled by her beauty and psychic skill, Houdini makes a play for Mary’s heart, revealing himself to the woman in ways he’s always kept hidden from view.

The crux of “Acts” rests in the suspicious relationship between Mary and Houdini. These are two seasoned illusionists who embark on a cautious relationship that requires some evolution of sincerity to properly coagulate. The characters are not accustomed to naked emotional declarations, and the film does a serviceable job attempting to crawl inside the mind of guarded personalities who’ve spent most of their lives playing extravagant roles to survive a cruel world.

“Acts” is not a mysterious picture, it’s a heartfelt one. Armstrong showcases a profound love for the smoky period production design and the crowd-dazzling majesty of Houdini, pushing the spectacle of trickery to the forefront of the film at important intervals. Pearce and Zeta-Jones make a handsome couple, but their acting highlights arrive in the sultry psychic/magic sequences, where Armstrong stands back and permits the cast time to internalize the labor of the con and the full-bodied release of triumph.

But where does “Acts” ultimately lead? Efforts to juggle the romance, mystery, and Houdini’s psychological divide leave the picture disoriented and truncated. The feature never inhales deep enough at any given point, always in a hurry to sort through the exposition and move on to the next conflict. The screenplay by Tony Grisoni and Brian Ward attempts to keep the narrative focused on the monetary prize to coil the film up as something akin to a thriller, but the strongest drive of the movie is found in Houdini’s infatuation with Mary, and her growing crisis of conscience as contest time arrives.

“Death Defying Acts” lacks ideal mystery, but it evokes a romantic era with generous screentime, and the performances are accomplished all around. Armstrong even manages to unearth a note of disturbing motherly corruption to conclude on, adding a pleasing bite to the story. Perhaps the film isn’t a grandiose statement of splintered lives, but it’s an agreeable drama, best when it stays close to the decomposing heart of a professional liar. 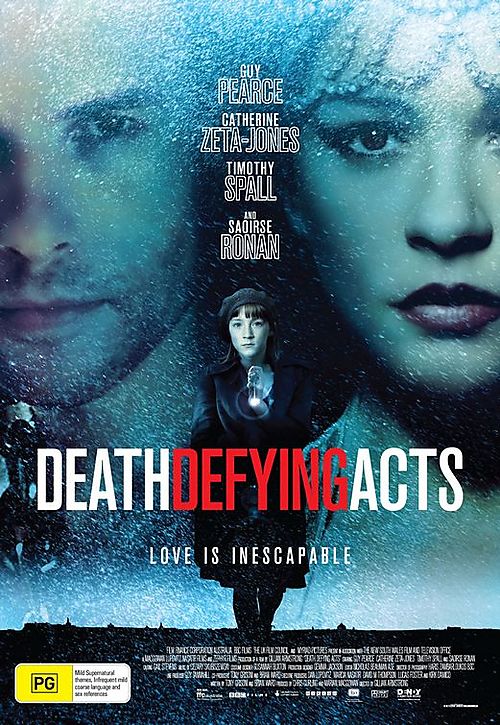 I loved this movie, and enjoyed your insiteful review! Zeta Jones was my favorite, but all the leads were great!