Away from his stuffy, loveless home for the first time, Charles (Matthew Goode) is off to Oxford, where he encounters all sorts of eccentric, intellectual types, including Sebastian (Ben Whishaw). Accepting Sebastian’s invitation to visit his family’s estate, “Brideshead,” Charles is immediately taken with the ornate, cathedral-like castle, and even more so with Sebastian’s sister Julia (Hayley Atwell). While the siblings are trapped under the control of their domineering, staunchly Catholic mother (Emma Thompson), Charles remains fascinated with the family, soon finding himself caught up in their abusive, controlling ways, patiently waiting for his chance to steal Julia away.

Based in the illustrious 1945 novel by Evelyn Waugh, “Brideshead” has been put through the adaptation wringer a few times, most notably a 1981 English mini-series starring Jeremy Irons as Charles. It’s an epic tale of psychological erosion pushed behind the icy glass of period-specific emotional withdrawal and, for this story, religious authority. It’s a narrative that twists throughout time and location, requiring a steady directorial pulse to keep it stimulating and dramatically rewarding.

Filmmaker Julian Jarrold, having worked his way through a similar tea-n-disgrace story with last year’s engaging “Becoming Jane,” takes his work on “Brideshead” very seriously, placing immense care in every step of the story. It’s not a directorial job for Jarrold as much as the role of a lion tamer, whipping back a hungry legion of period storytelling proclivities that have sunk lesser pictures. No doubt, “Brideshead” is the Elvis Presley of English misery, trumping its yarn of mournful unrequited love with an even heavier dose of religious dynamite. It’s a perfect storm of brusque drama, and Jarrold juggles the moods and fangs of the material with expert efficiency.

Of course, some corners are cut here, as expected. The mini-series took 11 hours to explore the finer edges of the center tragedy, while this film production is only permitted two and some change. I feel the biggest piece missing from “Brideshead” is Charles’s infatuation with the estate itself; a concentrated point of the story that the picture has little interest in discussing beyond starry, art-history gazes and interior urges to return. Also, the film’s second half requires a specific communication of time passage that never settles satisfactorily. It’s a testament to Jarrold’s passionate work that these are the few complaints by film’s end.

What “Brideshead” succeeds at is evoking a lustful air of desire, notably between Charles and Julia, but also within Sebastian, who indulges Charles’s friendship to locate a romantic entry point. Sexuality lunges out of the script, with short bursts of lovemaking and forbidden passions, greatly enhancing the iron fist of faith that permeates the drama, confusing the characters, some to a point of dementia. The performances are top-tier all around, with special attention paid to Thompson’s sublimely icy matriarchal veneer and Atwell’s stunning metamorphosis into the picture’s forbidden fruit.

While most films of this ilk tend to rest among the finer details of it all, “Brideshead” wishes to tell a marathon story of betrayal and the vagaries of fate. It’s a convincing potion, and while the narrative is missing a few notes in the overall orchestration, Jarrold still manages to piece together a haunting motion picture of unique cinema accomplishment. 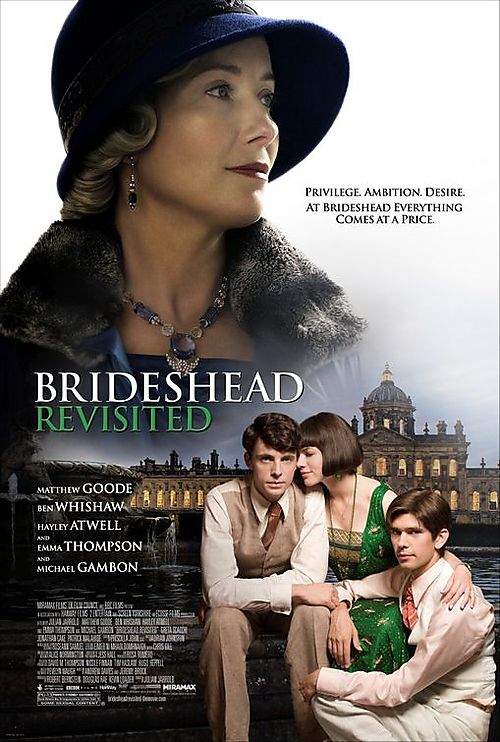