“Brick Lane” is a melodrama, but it’s crafted with such fascinating compassion and care for moments of heart-twisting domestic compromise that it’s easy to forgive a few narrative bumps and a handful of familiarity.

Pushed into an arranged marriage with a man of tradition (Satish Kaushik) at a young age, Nazneen (Tannishtha Chatterjee) was forced to leave her idyllic life in India for the cold streets of London, where her limited English and the judgment of her neighbors keeps her closed off from the world. Continuously hoping for a chance to return home to reunite with her sister, Nazneen instead finds distraction in the arms of a younger Muslim radical (Christopher Simpson). As the two embark on an affair, Nazneen finds her world permanently altered by her desires, compelling her to search within for the peace she’s craving.

Based on the novel by Monica Ali, “Brick Lane” isn’t bound much by plot, instead the movie propels on an overriding sense of inner mystery. The character of Nazneen is a silent witness to her own existence, and the story skillfully communicates that frightening frustration of a life lived without participation. Director Sarah Gavron reinforces the ache in her characters, discovering a persuasive, nervous tone for “Lane” that never downgrades to maudlin soap opera theatrics. Gavron respects the line between hysterics and the authentic throb of isolation, and she winds the film up with terrific attention to emotional detail, pushing Nazneen into distressing corners with little hope offered from outsiders.

To complicate matters further, “Lane” introduces a 9/11 subplot that changes life for the characters, sending them into either fight or retreat mode as the neighborhood becomes a nightmare zone for the Bangladeshi community. Gavron eases the political squeeze into the story agreeably, using the world-changing event to further confuse Nazneen’s whirring mind; she’s hopelessly lost between her lover and the life she’s made or her demanding husband and the fondly-imagined comforts of her childhood. It a credible push and pull that brings a valuable tension to “Lane,” performed with accomplished nobility by the wonderful cast.

“Lane” tries to muscle in a substantial dramatic conclusion for itself, pursuing the trials of Nazneen and her frustrated teen daughter. While the emotion rings true, it betrays the stillness Gavron constructs to emphasize the slow, inevitable violations. However, it’s a grab to get the movie to somewhere uplifting, and the film arrives at that place intact. Ultimately hopeful, “Brick Lane” feels careful enough to connect with its intentions, leaving behind an engaging, turbulent picture that pays careful concentration to the tender nuances of the longing, unfulfilled heart. 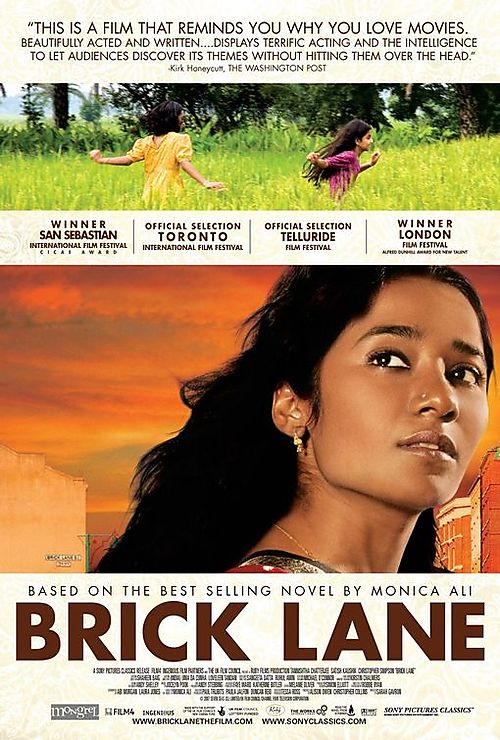