“Never Forever” had all the opportunity in the world to fall in line with its romance-novel inclinations, to feed off melodrama and end up a tragic tear-jerker that flails wildly and distills the pain of life into bite-sized bits of mascara-smeared displeasure. Thank heavens writer/director Gina Kim isn’t interested in reducing her feature to a puddle of pandering.

Facing the death of his father and the brick wall of his own infertility, Andrew Lee (David Lee McInnis) has become a shadow of himself, which frustrates his wife, Sophie (Vera Farmiga). When Andrew attempts suicide, it leaves Sophie flummoxed on how to put her marriage back together. Looking for a miracle cure, Sophie enlists illegal Korean immigrant Jihah (Jung-Woo Ha) to impregnate her, hoping to pass the forthcoming child off as Andrew’s. Using Jihah for coldly sexual purposes, it doesn’t take long for his curiosity to beguile Sophie, and with every tryst the two become closer, threatening the comfort of her marriage and the traditional destination of his American-fed dreams.

Certainly what Kim has written here isn’t a shockwave of originality. Any passing scholar of romantic cinema will recognize the working parts of “Forever,” perhaps even keeping a few steps ahead of the plot and its meticulously familiar turns. What’s unpredicted about this picture is how much it rests in the comfort of observation.

Kim’s camera keeps tight on her characters, scanning their facial expressions for every blip of nuance. The director plays with focus and shadow to better evoke complicated emotional obligations, using her actors to articulate the story instead of depending solely on artificiality to see the narrative to the bitter end. It’s this confidence that had me riveted to the screen, anxiously swallowing up every new fresh moment of silent withdrawal or inner-turmoil, investing heavily in Sophie’s desires as she’s caught between her isolating marriage and this strange happy accident of lusty affection for Jihah.

The screws are tightened further by cultural divide. While “Forever” is a love story at heart, it’s also a rather chilling document of an outsider trying to fend off the poisoned darts of judgment to keep love afloat. A Caucasian women (embellished further by Farmiga’s ocean-blue eyes and platinum hair) trying to survive in an intolerant, religious Korean community, Sophie’s story is not only of rekindling flames of desire, but the restoration of herself as an individual. I adored how Kim protects that delicate journey by reinforcing Sophie’s confinement over and over. It helps to understand the fragile woman and her destructive choices.

At this point there just isn’t enough praise out there in critic land to be heaped on Vera Farmiga, who is easily one of the better actresses working today. Her fearlessness defines “Forever” on many levels, opening up Sophie as a woman stunned by her desire and obligated to feed her craving for demonstrative love. She’s matched well by Jung-Woo Ha, who nails every scene of corrosive discomfort as Jihah’s feelings grow from duty to affection, all the while feeling the vice-like grip of his illegal status. Both actors are asked to play out some rather graphic scenes of sexuality, but the transition between the initial sterile arrangement and full-out lovemaking is a wondrous thing to behold, and fills “Forever” with an assortment of unexpected emotional cues to absorb.

Presented in anamorphic widescreen (1.85:1 aspect ratio), “Never Forever” is a softly-photographed motion picture, and the DVD remains enticing without falling into digital pitfalls. Black levels can be a little hazy during interior shots, but remain controlled throughout. Fleshtones are accurate.

The 5.1 Dolby Digital mix takes great care to heighten Michael Nyman’s heavenly string-centric score, filling out the edges of this often quiet film. Dialogue and the soundtrack are separated well.

“Original Korean Featurette” (3:08) is a short, subtitled making-of piece for promotional purposes. Interview audio quality is a bit sketchy, but interesting points are made.

“‘Never Forever’ in New York” (5:38) is a considerably more lighthearted affair, giving the viewer a fly-on-the-wall look at production. Subtitled in Korean, the featurette is nearly a gag reel, complete with blown takes, set mishaps, and scored with a wacky public-domain-approved soundtrack.

A Photo Gallery (4:23) recounts the visual highlights of the picture.

And a Theatrical Trailer for “Never Forever” is included on this DVD.

Kim loses “Forever” to a shelling of hysterics in the final beats of the film, allowing Farmiga to furiously dig away as Sophie faces a break from the formality and manipulation of her life. It’s an uncharacteristic indulgence that I failed to see much use for, but it gets the movie to a poetic outcome that’s satisfying without being cloying. For a film as gentle, meaningful, and tender as “Never Forever,” the picture can be forgiven such old-fashioned melodramatic extravagance to make a lasting impression. 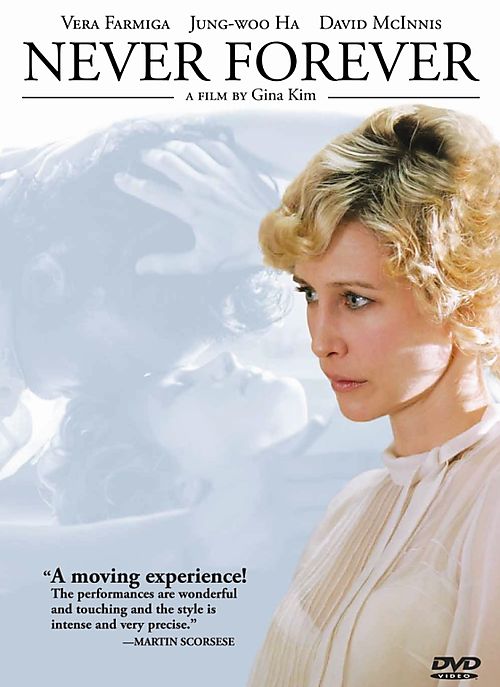