Thankfully, “Miss Conception” is not 2001’s “From Hell,” where Graham endured professional humiliation trying to transform herself into a Cockney-accented prostitute on Jack the Ripper’s “to do” list. “Conception” is a drastically lighter affair, pitting Graham’s character against the limits of her reproductive organs in a frothy romantic comedy that contains plenty of slapstick, a pleasing tone, and Graham facing down the British tongue yet again.

She wins this time.

Georgina (Heather Graham) is a successful career woman with a handsome documentarian boyfriend, Zak (Tom Ellis), and a profound longing to start a family. Learning she only has one shot left to conceive a child, Georgina is horrified when a spat with Zak pushes him away, leaving her all alone. With only five days to make a baby, Georgina attempts to woo suitors with help from pal Clem (Mia Kirshner), only to find her efforts misdirected and, at times, completely rebuffed. Desperate, Georgina hopes for Zak’s return, but with time running out, she’s forced to consider extreme potential father candidates to make her dream a reality.

“Conception” is not a challenging affair, merely a cheery diversion looking to wring out a few laughs and warm fuzzies before it’s off to the land of immediately forgotten cinema. Written by Camilla Leslie, the picture clicks on a simple offering of light comic touches, shadowing Georgina’s adventures as she aims to find someone, anyone, who could successfully knock her up. With a dry English tone, Leslie’s episodic humor is cautiously arranged and successful, best when placing Georgina in impossible pickles (the character finds herself man-fishing at a wake for a gay man; she attempts to purchase a turkey baster for seminal delivery). There’s nothing original or delightfully farcical here, but it all remains kindly and rewarding, when expectations are brought into proper perspective.

It’s director Eric Styles that screws up the overall pitch of “Conception.” Styles isn’t an accomplished comedic director, and his itch to molest every turn of the film into a mundane sitcom takes its toll on the elasticity of the concept. Styles has difficulty letting gags play out naturally and has a terrible penchant for shoving his camera into the actors’ faces, making some emotional points of the movie unbearably claustrophobic. I also wasn’t fond of a semen-spurted-on-cake gross-out gag that alters the film into an “American Pie” outtake for a short, uncomfortable spell. A more assertive director would’ve cut that nonsense right out.

While Kirshner eats up her boozy “Ab Fab” take on the dependable BFF, “Conception” is really the Heather Graham show. An actress of rickety reputation, “Conception” observes Graham at a comfortable age, with a satisfying command over her comedic gifts. I’m not suggesting Lucille Ball here, but Graham is a funny lady with sharp timing, and while Styles wants to turn her into the React-O-Tron 3000 by including extended footage of Graham mouth-agape and bug-eyed, the rest of the performance hits lovely screwball and sweet notes, going a long way to make Georgina sympathetic. Plus, she survives the latest attempt at a Brit accent. Not gold, but not “From Hell,” that’s for sure.

Presented in anamorphic widescreen (1.85:1 aspect ratio), “Conception” appears washed-out, with colors lost to a contrasty blur, rendering the image nearly monochromatic, which doesn’t exactly do wonders bringing out the warmth needed for the film to succeed. Detail isn’t acceptable and black levels are cloudy.

The 5.1 Dolby Digital mix kicks up with a few soundtrack moments, creating an agreeable sonic center to the film. Dialogue and music are comfortably separated. A 2.0 mix is also available.

“Behind the Scenes” (8:32) is a traditional EPK production diary, with cast and crew interviews describing the journey to the screen and character motivations.

A Theatrical Trailer for “Miss Conception” is provided on the DVD, along with looks at “Jack and Jill vs. The World,” “War, Inc.,” and “Meet Bill.”

I won’t give “Miss Conception” a straight-up recommendation, as it requires a specific mood from the viewer to best value its petite charms. However, it’s worth a look to see Graham flourish away from the punishing Hollywood radar, delivering a tender, sillyheart performance that restores some faith in her skill, and singlehandedly makes a formulaic film a rewarding sit. 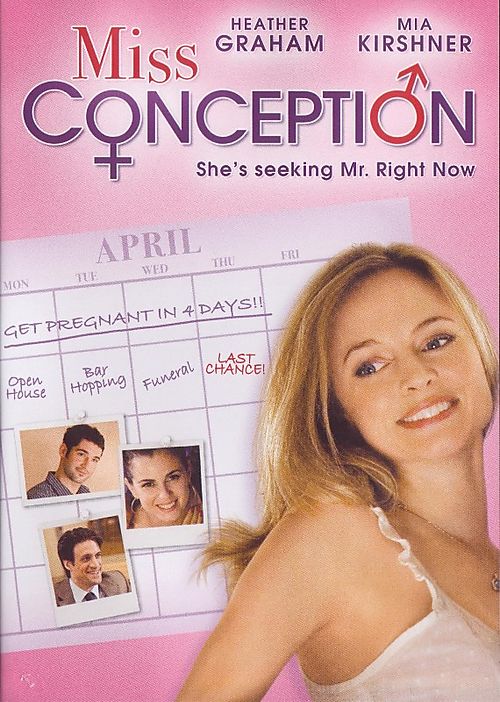