The Los Angeles Times quote on the cover of the 20th Anniversary DVD release of “Heathers” reads: “Without ‘Heathers,’ there would be no ‘Jawbreaker,’ no ‘Mean Girls’ and certainly no ‘Juno.’

That’s the best Anchor Bay/Starz could come up with to describe this sublime motion picture? For this utterly faultless document not only of punishing high school hierarchy and melodramatics, but a pitch-black, pitch-perfect comedy that somehow manages to be completely reprehensible and socially irresponsible, yet remains shockingly devoid of mean-spirited characterization and preaching? Oh these marketing stooges…they just had to bring the rancid knockoffs into the mix to destroy the integrity of the preeminent high school disaster story.

Westerberg High School is ruled by Heather Chandler (Kim Walker), a dominating Junior who lords over the student body like a dictator, keeping council with her subordinates, Heather McNamara (Lisanne Falk), Heather Duke (Shannen Doherty), and trainee Veronica Sawyer (Winona Ryder). Veronica is weary of the Heather world, but can’t find the energy to disconnect from the popularity it brings, even while her soul is slowly crushed. When she meets outsider J.D. (Christian Slater), Veronica stumbles upon love, only to find her new beau is very eager to carry out her fantasy revenge scenarios on the Heathers. When the two “accidentally” kill Heather Chandler, Westerberg eats up the incident, kicking off a rash of publicity and sympathy ploys that makes the Heathers even more prized, leaving J.D. ready for more carnage and Veronica caught in a situation that’s out of her control.

Over the last 20 years, “Heathers” has crawled from a theatrical one-week-wonder to a towering, beloved cult classic; a feature film seemingly made to be discovered by accident, where the acidity of the concept is most effective. I caught “Heathers” during its initial release, and my horrifyingly underage mind was blow away by this corrosive, challenging motion picture. Two decades later the effect still remains. The finest compliment I can pay the movie is this: it establishes an unpardonable plot to a point where any other film would halt, soften, and retreat, only to plow forward boldly and survey every last hazardous square footage of narrative, as though it was gripping a stick of dynamite, remaining fascinated with the flaming fuse instead of instantly recognizing imminent danger.

The delicious pools of poison are provided by screenwriter Daniel Waters, who crafts an affectionate ode to fantasy revenge killing with his puckered screenplay. Unfortunately, a rash of idiotic copycat films (check the DVD cover quote) have perhaps diluted Waters’s barbed work, but the writing still stands as a monumental achievement in sarcastic snap and oily tonal blackness. Waters writes like others would wield a handgun, blasting away high school archetypes by arranging them in his cat’s cradle of fatality and plastic sympathy, constructing a story riddled with razor-sharp edges, eager to expose the aloofness of adults, the opportunism and fragile herd mentality of teenagers, and the ugly truth about mineral water.

Waters’s screenplay is both a hoot and horror show, and remains the finest thing he’s ever written, perhaps due to his Hollywood virginity at the time. “Heathers” doesn’t back down, tugging away at every possible sacred cow, but the film is careful to retain Veronica’s disgust with her actions and eventual witness to madness. Without her conscience and overall crisis of faith, the movie would be a hollow, button-pushing experience. It’s a blast to watch J.D. descend into bomb-happy lunacy, but there has to be a center worth investing in, and Waters endows Veronica’s monocle-sporting, diary-writing, habitual lovesickness with the ideal amount of concentration and bewilderment. The script is a tightrope act you don’t see much these days without heavy globs of wink-happy irony. Waters has his strained indulgences, but this is one amazing piece of writing.

Director Michael Lehmann was also making his professional debut with “Heathers,” and, like Waters, has never been able to top this artistic achievement. It’s a motivated piece of filmmaking, following the script down every dark hallway, bolstered by Francis Kenny’s exquisite cinematography (a sublime low-budget effort), and a delightful, evocative, snap-happy score from David Newman. Lehmann’s visual invention and concentration go a long way to making “Heathers” palatable and richly entertaining. The filmmaker also preserves Waters’s black comedy, straightforwardly offering the oddities without breaking the mood, holding back Ryder and Slater (both delivering wonderful, eyes-wide-open performances) the best he can without letting the whole thing trip into camp.

Presented in anamorphic widescreen (1.85:1 aspect ratio), it appears Anchor Bay/Starz is simply reusing the transfer handed to the 2001 release of the film. The image is soft, absent a great amount of detail, and the fleshtones appear too pinkish throughout. Black levels also suffer from softness, but remain dependable.

The 5.1 Dolby Digital mix doesn’t rattle the neighborhood, but for low-tech film like “Heathers,” the experience is pleasing, with some action in the surrounds brought on by the score and acts of violence. Dialogue is easy to hear and separated accurately from the soundtrack.

English for the Hearing Impaired subtitles are included.

Ported over from the previous DVD (and the 1997 laserdisc):

A feature-length commentary with writer Daniel Waters, director Michael Lehmann, and producer Denise Di Novi is truly “Heathers 101” for fans, divulging nearly every detail of the film in a warm conversational style befitting this fruitful artistic accomplishment. Some highlights:

- Distributor New World Pictures ran out of money as “Heathers” entered a wider release. Di Novi even offered to buy a newspaper ad for the studio to keep the film alive.

- Jennifer Connelly and Heather Graham were both considered for the role of Veronica.

- Christian Slater doing a Jack Nicholson impression? The trio claim no knowledge of such an act of profound coolness.

- “Heathers” was titled “Lethal Attraction” for some overseas markets, which mystifies Waters.

- While the commentators adore their film, they view the ending as a “compromise.”

It’s a marvelous listen, even if some of the comments could only make sense in 1997. For instance: Di Novi mentioning that the film’s fashion “still works.”

“Swatch Dogs and Diet Cokeheads” (29:55) is a definitive take on the “Heathers” experience, gathering cast and crew to collect their thoughts on participating in a black comedy classic. Scads of engaging yarn is spun here, but the finest moments spill forth from Winona Ryder, who reveals herself to be a slightly loopy personality, way into the film in a beaming, stoner manner I wish more actors would embrace.

And a Theatrical Trailer is included on this DVD.

New to this DVD:

“Return to Westerburg High” (21:21) is a featurette that merely embellishes previous production stories, bringing back Waters, Lehmann, and Di Novi to recount the making of “Heathers.” Time has passed and a smattering of new anecdotes are shared, but it’s a truly redundant offering, perhaps only meant to sweeten the DVD reissue pot. If you owned the previous release, you’ve already heard these stories.

“Heathers” is a darkly comic masterpiece, one of the best films of the 1980s. It’s an unsettling experience, a runaway roller coaster of tonal changes and sly characterizations; a film that will make you cringe as much as it will make you laugh. I wouldn’t want a teenage suicide comedy any other way. So grab your croquet mallet, load up on “Ich luge” bullets, and crank up the Big Fun: “Heathers” is a motion picture that continues to impress and disturb, even 20 years after release. 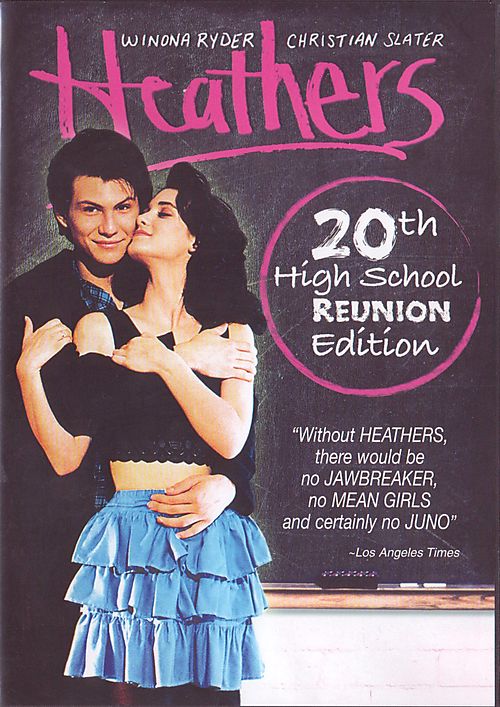 Without a doubt one of my favourite films of all time, a black comedy classic.

BBQ corn nuts!!
Christian Slater is always very entertaining. A seriously underrated actor, imo. His pairing with Winona Rider in this classic was serendipitous.
Thanks for a great review!