When the Reaper virus rears its ugly head in 2008, it threatens to wipe out Scotland, forcing government officials to do the unthinkable: wall off the country to isolate the infected. 25 years later, the virus has returned, and the secret of a potential cure is locked away in the quarantined country now populated with the tattooed and cannibalistic dregs of humanity. Wasting no time, the cops (led by Bob Hoskins) look to Eden Sinclair (Rhona Mitra) and her band of military specialists to penetrate a makeshift city and recover a cure from gang leader Kane (Malcolm McDowell) before the Reaper has a second chance to wipe the population off the planet.

If the plot sounds like a job for Snake Plissken, you’re not far off. Apparently Marshall was munching on a serious dosage of “Escape from New York” pills when manufacturing “Doomsday,” resulting in not only a comatose actioner, but a derivative one as well.

Cracks in the foundation show up immediately in “Doomsday,” particularly in the casting of Mitra as the resident badass, Eden Sinclair. Mitra is impossibly beautiful, but she’s also impossibly bland: a personality-free anti-hero who’s left hanging by Marshall’s remote screenplay, which doesn’t have time or patience to develop any character. It leaves the picture a goulash of highly-caloric emptiness, with Marshall preferring a sensorial assault over any form of dramatic interaction. He’s making a dumb ‘80’s action sideshow, yet, in his quest for excess, he’s lost any potential, and quite critical, focal points along the way.

Because “Doomsday” appears to come from the place in Marshall’s brain that encourages mediocrity, the picture somehow moves from “Escape from New York” to “Lord of the Rings” in the second half, where Sinclair tracks Kane to a touristy Scottish medieval castle, where the villain lords over his horsemen and gladiators with an iron fist. The tonal change isn’t out of the blue since, by this point, Marshall’s exhausting ADD has been firmly established. However, that doesn’t excuse how goofy the movie becomes in this knights-and-arrows section of the film, amplifying the disconnect between what Marshall thinks is a bloody good show and what nonsense is actually happening onscreen.

Offered in anamorphic widescreen (2.35:1 aspect ratio), the image detail on the “Doomsday” DVD release is outstanding, showing off every gory element with superlative clarity. Marshall’s bloodless color scheme is also preserved here, and black detail is solid throughout.

The 5.1 Dolby Digital mix is a barnstormer, with healthy attention to surround activity and violent atmospherics. Soundtrack and dialogue are cleanly separated (much more than the theatrical presentation of the film I caught months ago).

“Doomsday” is offered in an “unrated” version of the film (to compliment the included theatrical cut), which doesn’t add any major subplots, only gore…loads of it. I’m not convinced it stimulates this already over-caffeinated film any further, but those with a taste for DVD mayhem should be pleased with the reinstated bloodbath.

An audio commentary with director Neil Marshall, and actors Sean Pertwee, Darren Morfitt, Rick Warden, and Les Simpson is a pub-like affair with the affable co-workers deconstructing their effort. Marshall is the captain of the commentary ship, dishing out details on the South African location, his many film tributes, production difficulties, and the overall bloodletting intent of the picture.

It’s an extremely conversational commentary and the men often talk over each other trying to submit their thoughts. The overall mood is one of big screen triumph, celebrating Marshall and his step up from low-budget scrappers to a well-funded embellishment of his imagination.

“Anatomy of Catastrophe: Civilization on the Brink” (17:23) is the making-of featurette for “Doomsday,” sitting down with key production members to discuss how the film came to be. On-set footage and interviews pad out the program, showing the viewer location shooting, stunt work, and revealing creative inspiration.

“The Visual Effects and Wizardry of ‘Doomsday’” (8:32) uses impressive comparison shots to showcase the incredible visual magic of the film. Interviews with the people responsible add needed perspective to the expansive scope attempted in “Doomsday.”

“Devices of Death: Guns, Gadgets, and Vehicles of Destruction” (20:09) is the hardware parade, observing the work put into creating the practical world of “Doomsday,” again visiting with cast and crew, who tour the set and explain the finer details of the cars and stunts.

A Theatrical Trailer for “Doomsday” has not been included on this DVD.

“Doomsday” is a mess of lousy filmmaking and unrelenting artistic bankruptcy, smashed together to form an ear-splitting, overcooked, awfully irritating shell of an experience. Whatever bloody-knuckle merriment Marshall was intending with this tribute to the cinema speeds of the ‘80s has been lost in the headache-inducing translation. 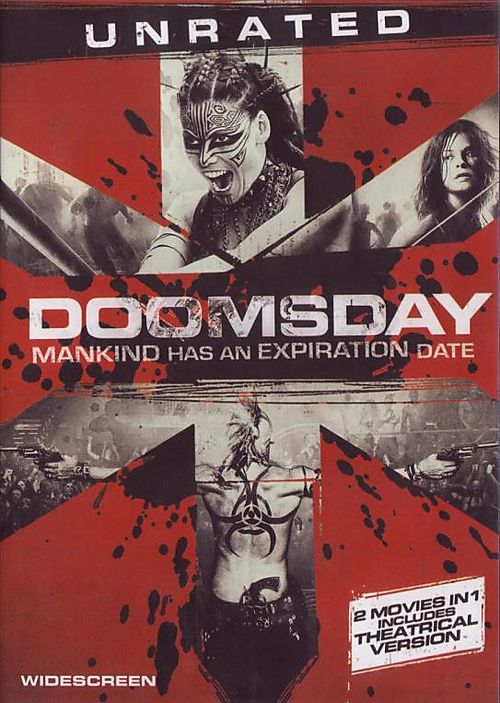