A poor construction worker, Chow Ti (Stephen Chow) is unable to properly provide for his nine-year-old son Dicky (Xu Jiao, a marvelous Chaplinesque child performer), instead working long, punishing hours just to put the boy through private school, where he’s the constant target of bullies. While sifting through the garbage for shoes, Chow comes across an otherworldly green orb and presents the interesting find to Dicky as a toy. When the ball morphs into a tiny furry alien with an elastic emerald body, Dicky befriends the creature, hoping his new pet will make him a star at school. However, this creature, nicknamed CJ7, reveals itself to be a problematic companion with peculiar powers Dicky is ill-equipped to handle.

Swallowing Spielberg pills, Chow’s “CJ7” is the director’s shot at an everlasting sci-fi fantasy fable, while endeavoring to create a cute alien saga for the whole family. When I write that the film is eccentric, that’s not doing the oddities on display here justice. “CJ7” is downright insane at times.

Chow loves his comedic exaggerations, and for good reason: he executes silly with dazzling skill. “CJ7” might be a minutely less aggressive production from Chow, but that doesn’t make it any less unreal or hilarious. Dicky and CJ7’s adventures are the centerpiece of the movie, and they vibrate with a broad slapstick invention. Chow is more than happy to play the adorable card for the doe-eyed, green-bodied alien, but his best stuff is unleashed in Dicky’s imagination, where CJ7 thrashes enraged dogs, constructs special shoes that help the boy excel at every sport, and assists in classroom cheating.

The reality of the beast is less enchanting, and I adored how Chow essentially treats CJ7 as a rubber ball, tossed around with little interest for the alien’s well being. It keeps the drippy, cutesy qualities down to a dull roar, and permits the material a firm bite that’s typically absent from the family film genre. Chow likes to keep the mood of the movie lighthearted, often fantastical (a few of Dicky’s schoolmates are played by grown men in wigs, and they enjoy inexplicable martial-art showdowns), but never bows to saccharine inclinations. It’s pleasing to see Chow firing off absolutely insane ideas on purpose, the finest being the young boy Dicky, who’s played with graceful comic spitfire by a young actress.

Because every film Chow composes eventually implodes, “CJ7” takes a strong left turn in the final act, where the alien’s regenerative powers are put to the ultimate test. The laughs take a breather here, replaced by intense crying fits and an unbearably dark tone that cripples the movie, blindsiding the viewer with a shovel-to-the-face smack of despair. Chow recovers with a spirited finale, but if there was ever a movie made with a built in bathroom break, it’s “CJ7;” duck out at 70-minute mark and thank me later. Chow’s shot at sentimentality is commendable, but executed ludicrously.

Presented in anamorphic widescreen (2.40:1 aspect ratio), “CJ7” is a visual gem, with steady, healthy DVD colors and firm black levels. Detail is delightfully strong, even revealing the limitations of the CGI, perhaps too well in some shots.

The 5.1 Dolby Digital mix is a vigorous event, with sharp attention to the surround channels for orchestral swoops and cartoon pops of CJ7’s mischief. Dialogue is reproduced clearly. An English-language 5.1 mix is also available, though the film is significantly more entertaining subtitled. A French 2.0 mix completes the audio offerings.

English and French subtitles are included.

A feature-length audio commentary from director Stephen Chow, actors Chi Gung Lam and Shing-Cheung Lee, and writers Lam Fung and Kan-Cheung Tsang is provided in subtitled form. The guys are extremely friendly with each other, and provide a polite commentary of jokes and production tidbits. Not everything is intended for the average listener, especially a discussion of Mandarin dubbing, but there’s enough good-natured discussion and deconstruction of Chow’s directorial technique to make the track a valuable listen.

“The Story of ‘CJ7’” (13:41) is a basic EPK featurette, yet it’s great fun to see Chow at work, learning how the man controls a set and interacts with his talent. There’s also an important discussion of Xu Jiao’s gender-bending casting included to help clear that matter up.

“CJ7: Mission Control” is a game that puts the player in command of getting everybody’s alien friend on China’s Shenzhou 7 rocket to send him home. I’m not sure I understood the full point of this diversion, but kids will surely have fun with it.

“‘CJ7’ T.V. Special” (22:04) is another making-of featurette, only here the focus is on the technical achievements, showing how the production brought the title character to life.

“Anatomy of a Scene” (6:40) breaks down the insane production requirement minutiae of Dicky’s uproarious bathroom shakedown of CJ7.

“How to Bully a Bully” (4:11) somehow attempts to merge sincere rules on dealing with bullies with the promotion of “CJ7.” It fails.

“How to Make a Lollipop” (1:30) shows viewers how they too can make prop candy for movie sets.

“‘CJ7’ Profiles” (6:58) runs through all the film’s characters, revealing strengths and weaknesses in a cartoony fashion.

A Theatrical Trailer for “CJ7” is included in this DVD, along with peeks at “Persepolis,” “The Spectacular Spider-Man Animated Series,” “Storm Hawks,” “Taking 5,” “Roxy Hunter and the Secret of the Shaman,” “The Water Horse: Legend of the Deep,” “Spider-Man 3,” “Close Encounters of the Third Kind,” “My Kid Could Paint That,” “Vitus,” and “The Triplets of Belleville.”

A nutty fable punctuated with bouts of inspired slapstick, “CJ7” falls perfectly into formation with Stephen Chow’s previous accomplishments, permitting kids a chance to drink in the comedic legend’s crisp timing and predilection for the stranger moments of performance. Of course, it all deteriorates near the end, but it wouldn’t be a Stephen Chow movie if it didn’t contain a few unsightly errors in filmmaking judgment. 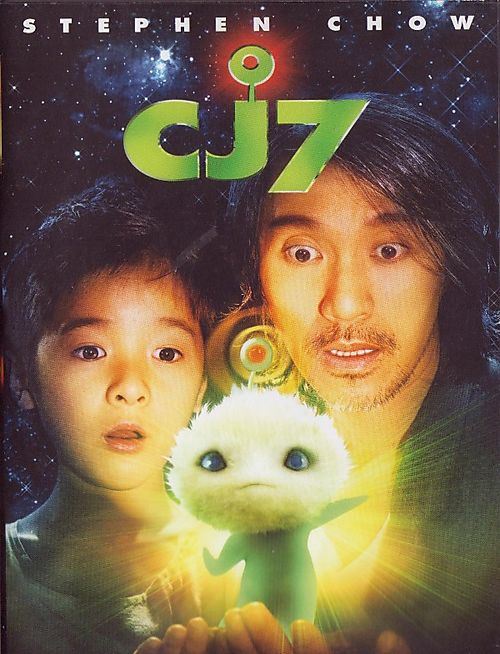